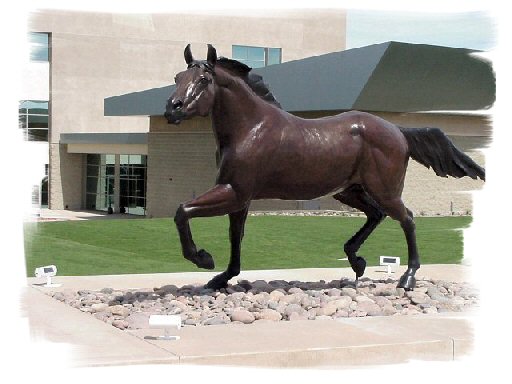 The horses are 11/4 life-size. The entire piece, consisting of one stallion and four mares, is 30 feet long, 18 feet wide, 12 feet high, and weighs approximately 14,000 pounds. The real-life model for the stallion was Rising Star, the horse Robert Redford rode in Electric Horseman, and who later became his personal horse. The stallion is positioned on the east side of the Wall herding his mares, who are crashing through to the West and to freedom.

In describing her bronze 'Freedom Horses,' Veryl Goodnight says 'My sculpture speaks to the freedom of the human spirit over oppression,' she says. 'My horses represent freedom, the [Berlin] wall represents oppression. The message is one of peaceful resolution. To have it placed in a location where inter-national diplomacy will be taught by Bush and other world leaders is extremely important to me.' 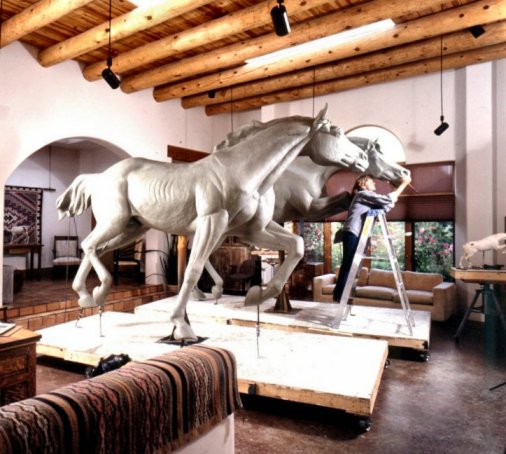 Goodnight and her husband, Roger Brooks, a former airline pilot, share their life in New Mexico with four horses and an assortment of cats and dogs. Their animals have used as models in her work. Goodnight is one of the foremost sculptors of horses in the United States, with clients and collectors worldwide. She is renowned for her monument-size work. It's one thing to sculpt an object, human, or animal on a small scale. It's another to make it larger than life, yet still accurate in detail and proportion. Many of Veryl's large pieces grace the entrances to buildings, museums, and residences throughout America. Horses are a natural for Veryl Goodnight, whose pedigree includes Charlie Goodnight, the legendary Texas cattle baron whose cattle drives became part of our western heritage. Much of Veryl's work reflects our history and highlights the pioneer spirit, particularly that of women. 'We forget their role in settling the American West,' she explained.

The U S. Congress endorsed the gift of one sculpture to Germany through a Concurrent Resolution that also recognized the Berlin Airlift. The U.S. Air Force transported the 'Freedom Horses' to Germany. Goodnight wanted a duplicate of the sculpture to be located in both Germany and the U.S. Goodnight's American casting was installed at the George Bush Presidential Library on the campus of Texas A & M University in College Station in November 1997. Veryl and her husband Roger favored this location over others because former President Bush was in office when The Wall was torn down. Because of Bush's efforts to unify West and East Germany, he is referred to in Germany as 'the father of German reunification.'

Goodnight is also known for her pioneer women series. About them she says, 'The thrust of this whole idea, starting with 'Cares For Her Brothers,' was the animals relationships to the women and the many types of women who came West. I'm interested in women who are close to the animals and the land. I focus on the 1800s, because animals were so integral to daily life. Too many people today take animals for granted. I want to make people more aware of their importance to our lives.

We Define the Future!