Though established over fifty years ago, CSUSB has not always been represented by the Coyote as its mascot. Read on for a full history of our original mascot, school colors and how we brought Cody to life! 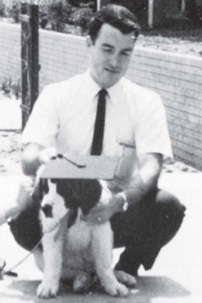 The CSUSB student body votes on the future mascot and colors of the fledgling campus. Among the ballot options for school colors were: brown and blue, burnt orange and gold, purple and silver, crimson and light blue, burnt orange and white, and green and black. Candidates for the campus mascot included the badger, golden condor, conquistador, jaguar, owl, phoenix, puma, vaquero, and the St. Bernard.

A run-off election is held. The St. Bernard and colors brown and light blue are determined as the new representation for California State College San Bernardino (CSCSB). Fun fact: had founding President John M. Pfau gotten his way, we’d have been the badger instead!

Following suit after the new mascot on campus, The PawPrint, the student newspaper, makes its debut. The paper was formerly called The Communique.

A special, impromptu, student referendum vote was held on campus to allow students the opportunity to vote to change the mascot. For years, students had been commenting and suggesting that the St. Bernard was not an appropriate fit for the campus, but that the coyote instead would be more representative of the campus and its surrounding areas. Though the coyote won overwhelmingly, the administration at the time discounted the results because the vote was not officially sponsored by student government.

Joe Long joins CSCSB as the new intramural sports coordinator. Joe decided the intramurals program needed a mascot to identify itself with. After a number of students told Joe the campus mascot was the coyote, he began to design shirts using a drawn-up coyote logo. Long later learned from Associate Dean of Students DeRemer that CSCSB had actually selected the St. Bernard as its mascot. When Joe went back to ask students why they had told him the coyote was the mascot, they said the St. Bernard “wasn’t officially the mascot” and that they liked the coyote better anyway.

Students vote to bring intercollegiate sports to CSCSB, beginning in the fall of 1985.

After years of debate over the coyote versus the St. Bernard, an ad hoc committee on the campus mascot is created by President Evans. Students voted during winter quarter registration; faculty, staff and alumni were polled via their respective newsletters. 57% of votes were in favor of changing to the coyote mascot while only 30% defended the St. Bernard.

Other mascot suggestions included the tumbleweed and the roadrunner. President Evans gave the final stamp of approval. Fun fact: for a period of time, there was a research lab on campus behind the psychology building that was home to seven coyotes. Today, it is home to alligators and lizards.

Despite the mascot being officially changed early in 1984, our coyote remained nameless until 1998! CSUSB Athletics approached Associated Students, Inc., in April to host a contest to name the coyote that had begun appearing at athletic events. The winner would receive a $250 cash prize. 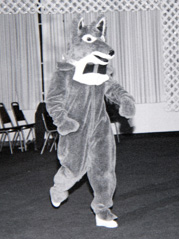 Cody was revealed as the winning name for the mascot. Twelve different individuals submitted the name, but the prize was award to the first person to turn in the suggestion. Martha Kazlo, a counselor in the Psychological Counseling Center, was the victor.

The official school colors are re-visited, especially as there are varying degrees of “Columbia blue.” In an effort to create a standard visual concept for CSUSB’s new logo and design, it is determined that a medium shade of blue would be the official school colors, followed with black, white, and gray (or silver) are acceptable secondary colors. Read more on our color history!

The Cody you see today made his debut at New Student Orientation in 2012, retiring the old costume and bringing a new spirited, blue Coyote! Fun fact: Cody had a companion named Cadee who could be seen at campus activities and athletic events for a short time! Cadee was never actually instilled as an official mascot. 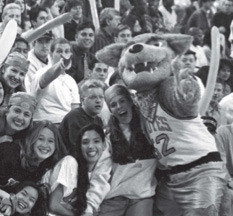 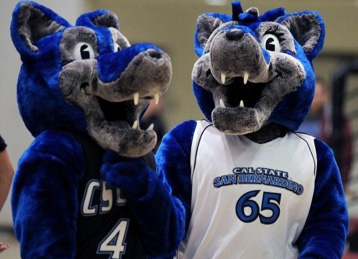 Today, you can catch Cody at special events all over campus – admissions days, student organization fairs, orientation and other school-spirited celebrations on campus! Cheer on the Coyotes at Coussoulis Arena next to him, or be sure to share a high five as you see him in the Student Union.