The CSUSB Opera Theatre is an auditioned ensemble that stages a major opera production on campus every year. The innovative, modern and zany adaptations of both standard operatic repertoire and new operatic works that have been produced by the CSUSB Opera Theatre have led to sold out performances, as well as rave reviews across the Inland Empire community. Past productions include Offenbach’s Monsieur Choufleuri, Bernstein’s Trouble in Tahiti, Humperdinck’s Hänsel und Gretel, Mozart’s Impresario and Cosi fan tutte, Maria de Buenos Aires by Astor Piazzolla, La Curandera, Monkey See Monkey Do, Tango, Concert Suite from Frida by Robert Xavier Rodriquez and their acclaimed Quentin Tarantino inspired production of Donizetti’s Don Pasquale.  CSUSB Opera Theatre produced the first abridged university production of Philip Glass’ Einstein on the Beach and featured an all Hispanic cast and most recently released a film adaptation of Missy Mazzoli's Song from the Uproar.

The CSUSB Opera Theatre is a proud six-time recipient of the City of San Bernardino Fine Arts Commission grant. 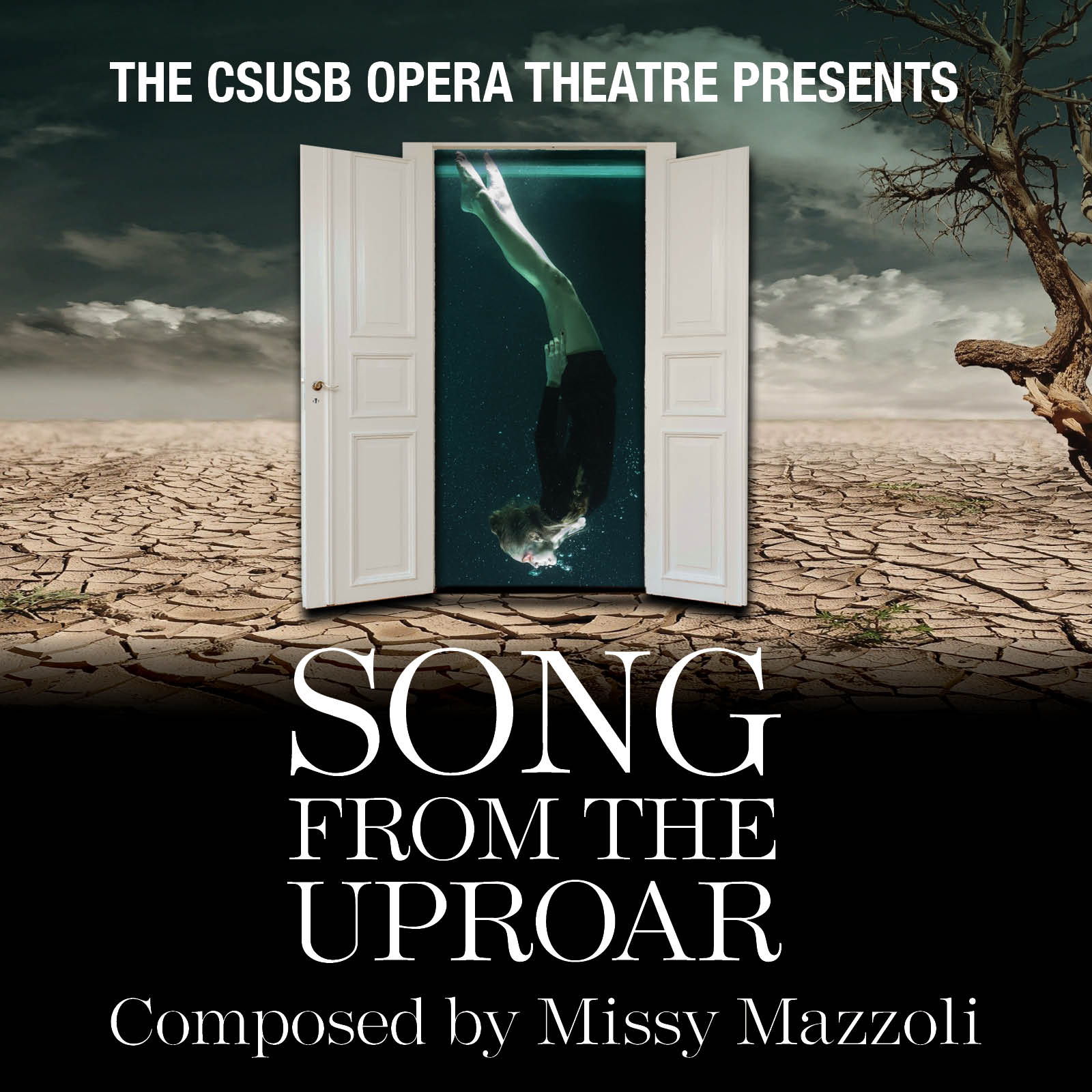 Song from the Uproar by Missy Mazzoli

Our film adaptation of Missy Mazzoli’s Song from the Uproar featuring some of LA’s top new music players and the work of critically acclaimed choreographer Faith Jensen-Ismay is now available for streaming:

The opera tells the story of the life of early 20th century feminist and writer Isabelle Eberhardt (1877-1904), a nomad born in Geneva, Switzerland who left her native home to travel the deserts of North Africa. The instrumentation for the work is unconventional and inspired by the composer’s rock and roll roots: piano, clarinet, flute, electric guitar, double bass and electronics. Lighting design for the film is by Professor Jason Mann, costume design by Professor Andre Harrington, soundtrack recording by Cash Tijerina and cinematography by James Trotter. 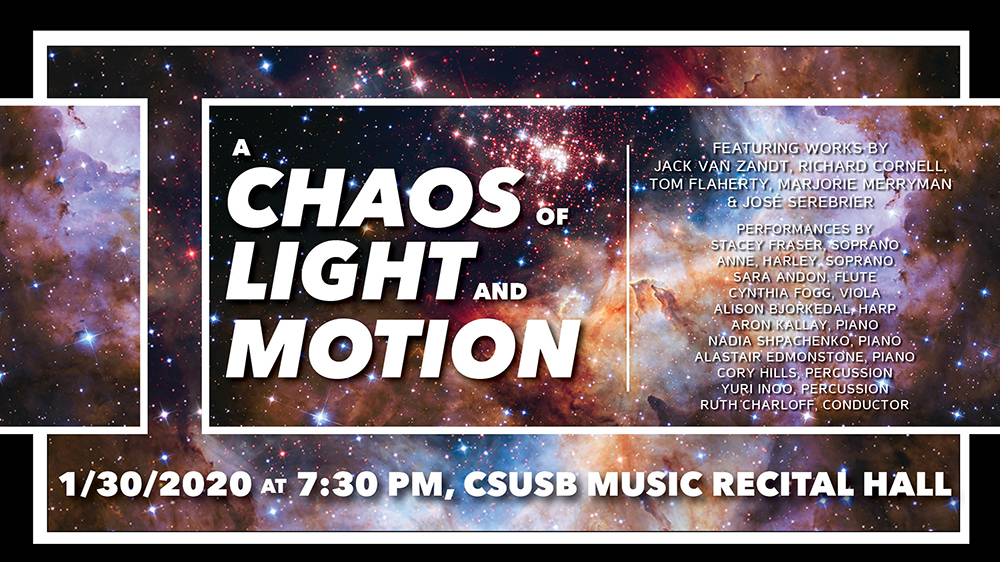 A Chaos of Light and Motion

The CSUSB Opera Theatre is proud to present the newest work by Jack Van Zandt, “A Chaos of Light and Motion,” which premiered January 30, 2020 in the University Recital Hall at California State University San Bernardino. “A Chaos of Light and Motion” was commissioned by soprano and CSUSB music department chair, Stacey Fraser, who will premiere it with some of Los Angeles’s very best performers, with the piece conducted by University of California Riverside orchestra and choral director Ruth Charloff. This dramatic song cycle will be video and audio recorded for subsequent release. Further performances are planned in the USA and Canada. 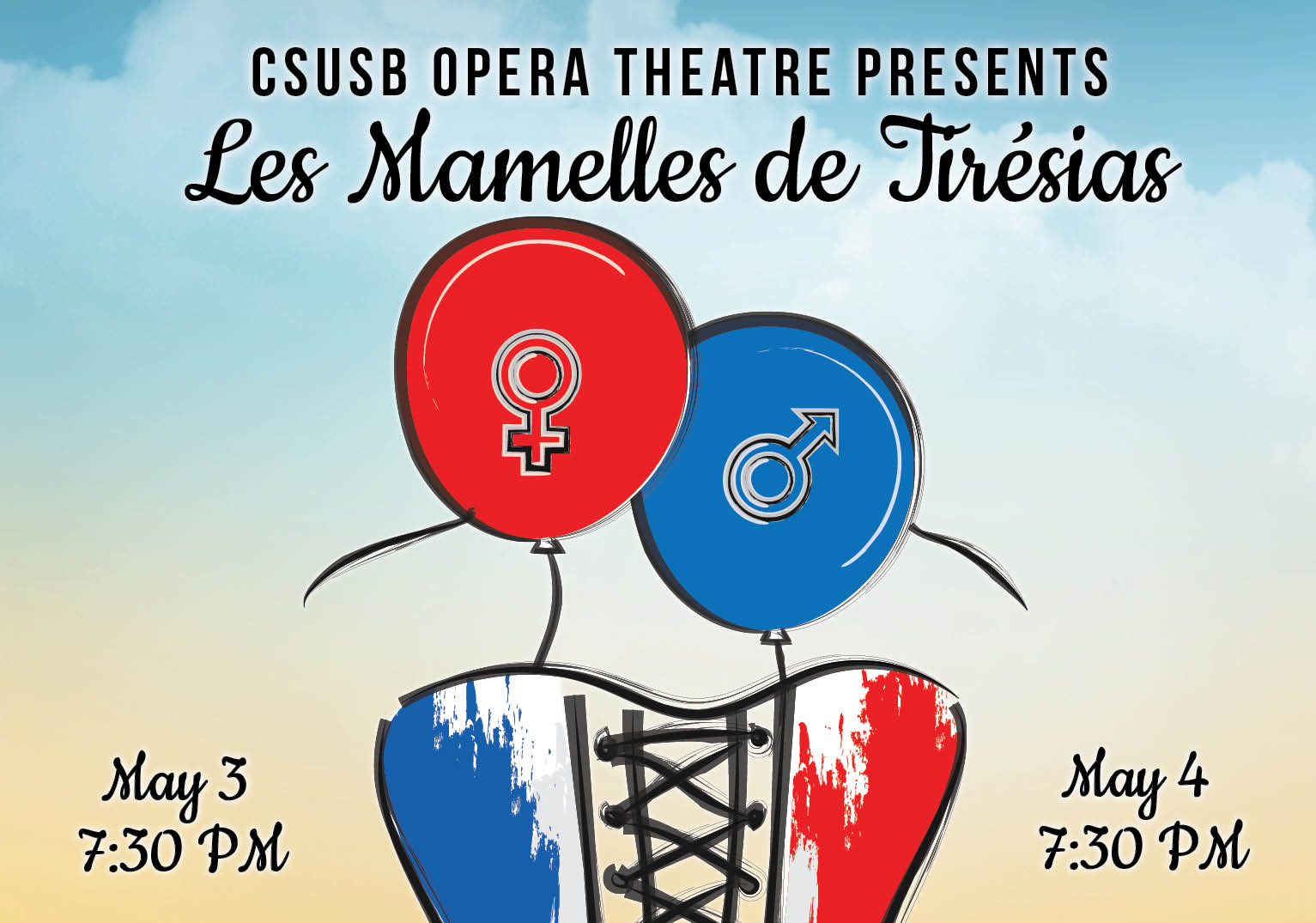 All expectations are confounded in this nonsensical comic opera. Written in Paris, during surrealism’s Golden Age, these absurdist delights unfold amid storylines that are as entertaining as they are strange.  Les de Tirésias (The Breasts of Tiresias) is a surrealist two-act opéra bouffe based on the play of the same title by Guillaume Apollinaire. Inspired by the story of the Theban soothsayer Teiresias, the author inverted the myth to produce a provocative interpretation with feminist and pacifist elements. He tells the story of Thérèse, who changes her sex to obtain power among men, with the aim of changing customs, subverting the past, and establishing equality between the sexes. Join the CSUSB Opera Theatre for an evening of spectacular nonsense and fun, where nothing makes sense and the bizarre is king! 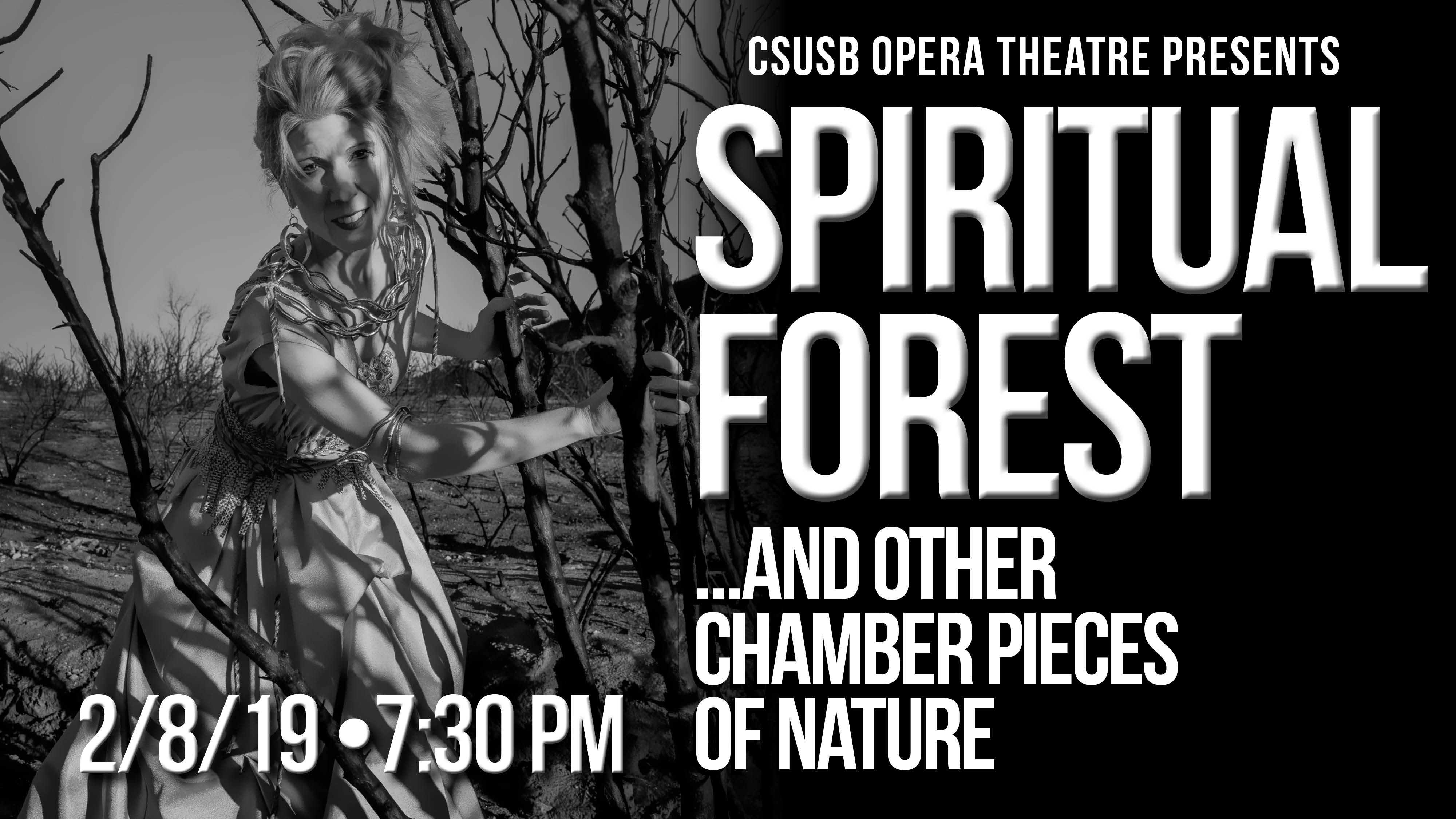 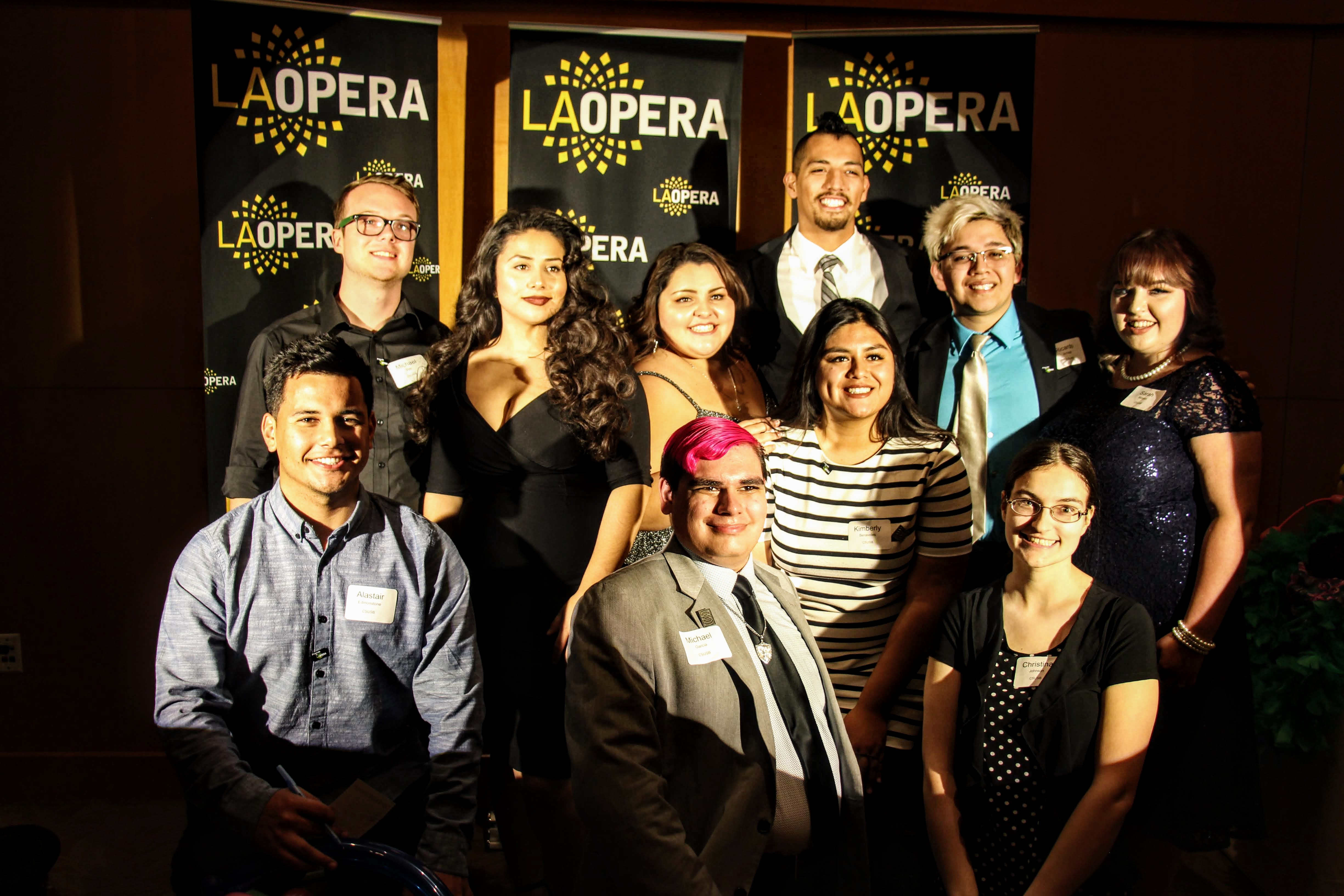 CSUSB Opera Theater were thrilled to attend LA Opera's award winning production of Satyagraha by Philip Glass in October 2018. Not only did we get to meet the cast afterwards but we were also treated to a once in a lifetime Q and A with composer Philip Glass and LA Opera CEO Christopher Koelsch!

We were delighted to welcome guest clinicians Suzan Hanson (Long Beach Opera) and Susan Kane (California State University, Los Angeles) to work with our vocal and opera students this year.

Einstein on the Beach by Philip Glass

The 2017-18 season featured the monumental Einstein on the Beach by Philip Glass. These performances were the first ever abridged version, and the first ever produced by a university music department. This was also the first performance by an all Hispanic cast.

In May we were so excited to welcome one of the leading composers today, Christopher Cerrone, to give a guest lecture and presentation to CSUSB Opera Theater students. Cerrone was a Pulitzer Prize finalist whose multi-media opera Invisible Cities was produced by the critically acclaimed LA based opera company THE INDUSTRY at LA's Union Station.

In April, CSUSB Opera Theater travelled to California State University, Fullerton to perform with our friends and colleagues from the CSUF New Music Ensemble in the beautiful Meng Hall. 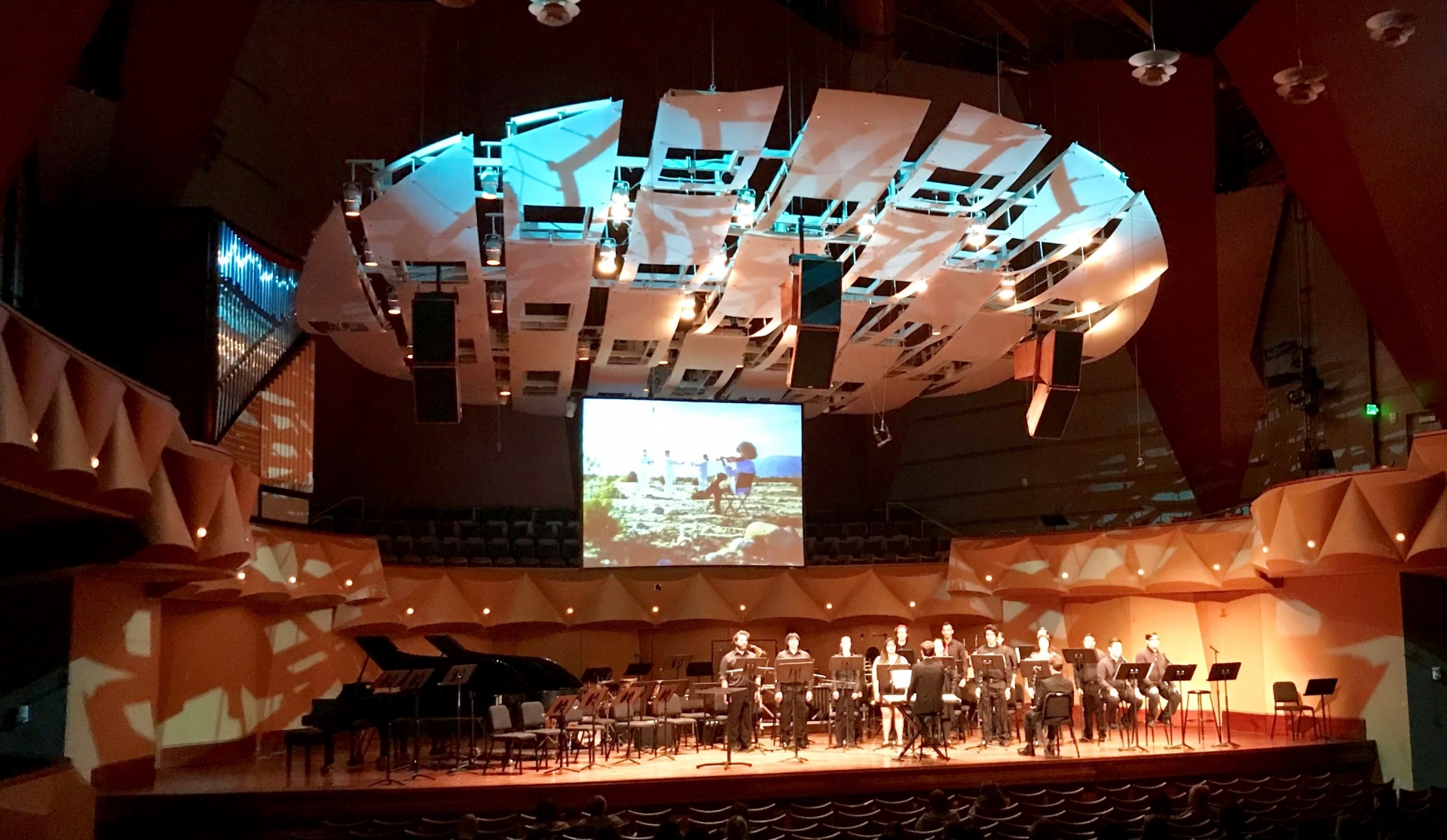 CSUSB Opera Theater continued their community partnership with Riverside Unified School District (RUSD). The ensemble travelled to Riverside Poly High School to present a music and movement workshop on Einstein on the Beach to over a hundred vocal and choral students from RUSD high schools.

CSUSB Opera Theater Music Director Alastair Edmonstone was recently profiled in the Press Enterprise regarding his work on the first university production of Einstein on the Beach at CSUSB.

CSUSB Director of Opera Theater Stacey Fraser receieved critical acclaim from the LA Times for her performance of Berio's Sequenza at monkspace in downtown Los Angeles. Mark Swed writes: 'Sequenza III is the most famous of the series. The famed Freudian French philosopher Jean-Francois Lyotard wrote an essay about this musical exploration of emotions to which a voice can be put to use in eight pregnant minutes. Stacey Fraser made the Sequenza into a seamless aria, sure of musical direction while missing none of the humor or the frightening shocks of horror.' 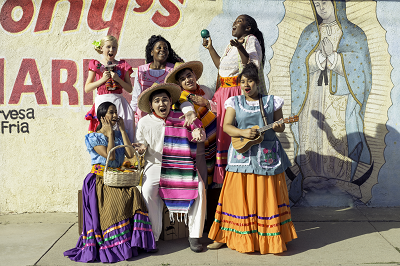 CSUSB Opera Theater students were treated to an unforgettable evening once again at LA Opera, for the award winning production of Offenbach's Tales of Hoffman. 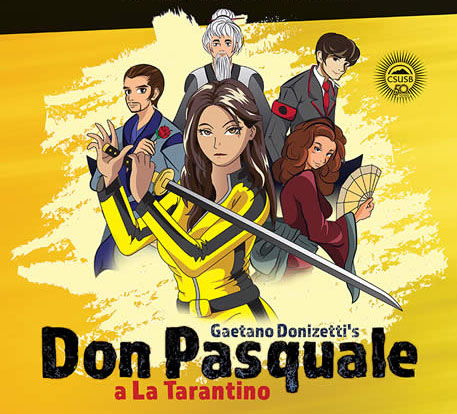 In winter quarter, the CSUSB Opera Theatre presented Kurt Weill's The Seven Deadly Sins on November 5th in the PA Recital Hall and on November 12th at The Vine Theatre in San Diego. For this opera, the CSUSB Music Department welcomed CSUSB Theatre's very own, Carol Damgen as director. The opera was choreographed by Faith Jensen-Ismay, and the pianists for the opera were Dr. ChoEun Lee and Dr. Wen Ting Huang

Don Pasquale a La Tarantino tells the story of an old rich “eligible bachelor”, Don Pasquale, who seeks to wed in order to teach his nephew, Ernesto, a lesson for not wanting to marry the woman Pasquale chose for him. In an arranged twist of events, Pasquale’s young bride, Norina, turns out to be Ernesto’s love interest. Norina plans to drive Pasquale mad with her antics, and dupe the old man into allowing his nephew to marry her. 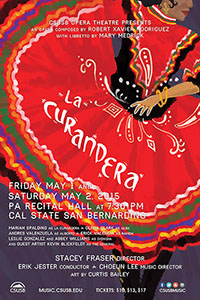 The 2014-2015 opera season brought the story of Robert Xavier Rodríguez, La Curandera to the Recital Hall Stage.This comedic one-act opera was well received by audiences and had them humming the melodies for weeks!Robert Xavier Rodríguez's Mexican folklore themed opera intertwined Mexican culture with opera delightfully offering audiences traditional Folklore music with a Mozart-esque twist in the score.La Curandera is a work with such stage presences and originality both musically and thematically, it appealed to audiences who normally would turn a deaf ear to new music.  The music for this opera was textured, multifaceted  and alive with an upbeat orchestration reflecting the Latino culture.

The CSUSB Opera Theatre production for the 2013-2014 season brought Ástor Piazzolla's María de Buenos Aires and Robert Xavier Rodríguez's Concert Suite from Frida to the CSUSB Recital hall stage. The compilation of these two one-act operas into one show gave audiences a delightful treat of music, dance and drama.

The CSUSB Music Department and The CSUSB Opera Theatre's presentation of A Tribute to Leonard Bernstein-Trouble in Tahiti was dazzling! With a sold out opening night performance, Trouble in Tahiti brought audiences to their feet. 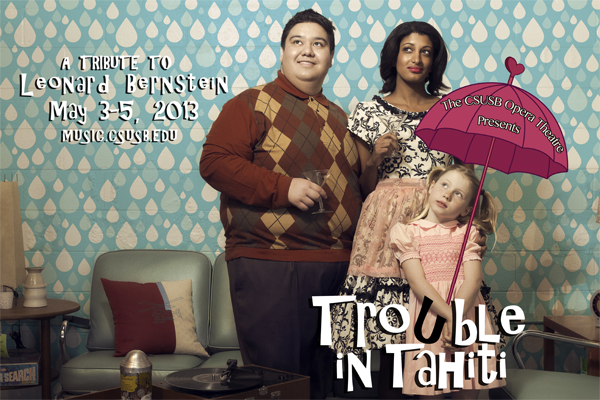 Trouble in Tahiti is a one-act opera centered around the story of a desperately unhappy couple searching for an escape to their mundane daily routine. Longing for love and unable to communicate, the couple attempts to carry on with their daily lives.

This past academic year the Opera Theatre in the Department of Music at Cal State San Bernardino presented Engelbert Humperdinck's opera Hänsel und Gretel.  Local audiences including the campus community of CSUSB, the community at large in the city of San Bernardino, high school and middle school students of the City of San Bernardino Unified School District CAPS program as well as audiences in the surrounding cities of the Inland Empire and Los Angeles County were thrilled by this most talked about production. CSUSB’s  Hänsel und Gretel featured costumes by LA based film maker Fabiola Munoz of Masque Films. The beautiful and set and lighting design was created by Randall Hodges.  In addition to the fully staged performances with orchestra, the CSUSB Opera Theatre students performed outreach events in an effort to bring opera directly to the community at large. 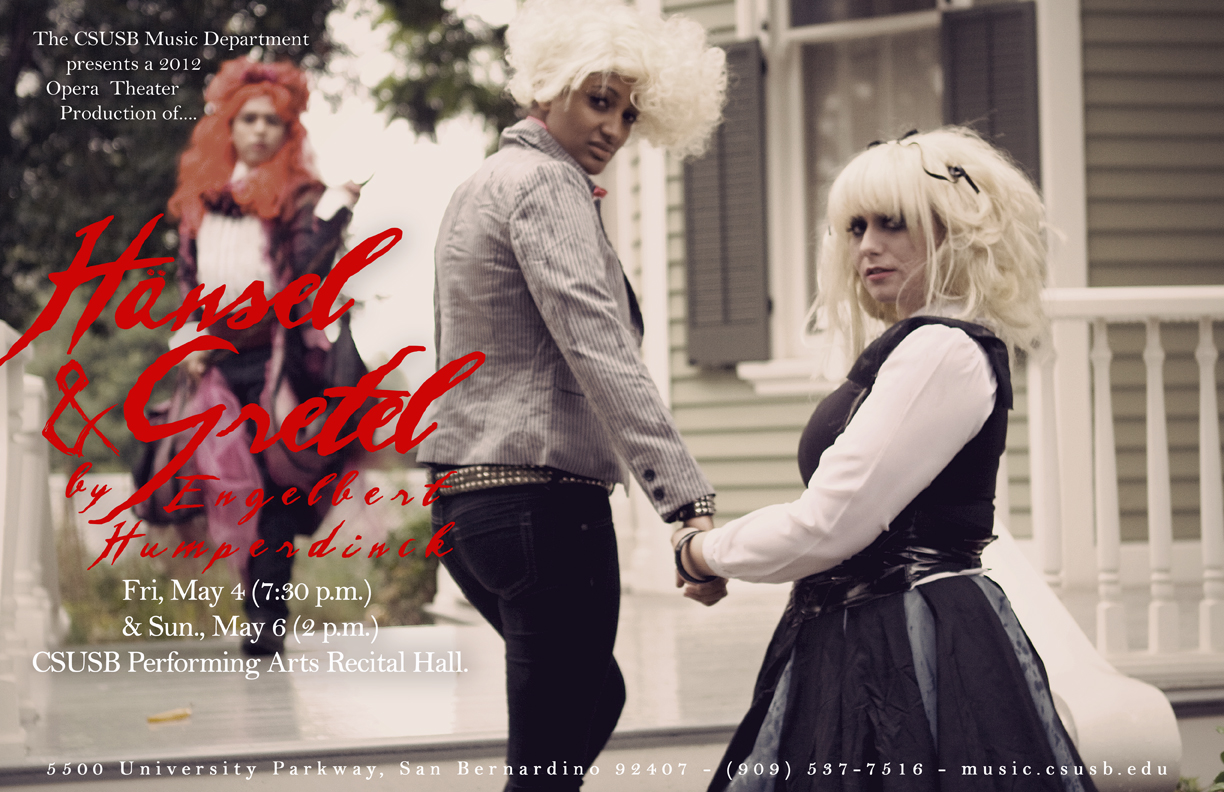 The design of the set and costumes resembled the colors and fantasy themes of Tim Burton’s recent Oscar winning movie Alice in Wonderland and pop culture references were incorporated into the costumes, staging and adaptation of the text. The opera was highly successful with sold out houses to approximately 440 audience members on the CSUSB campus.

Newspaper articles and promotions as well as live interviews on this original adaptation of the contemporary setting of Hänsel und Gretel appeared in The San Bernardino Sun, the Press Enterprise, Coyote Chronicle, IE Weekly and CSUSB Magazine. A documentary on the making of the CSUSB Opera Theatre production of Hänsel und Gretel will air on CSUSB TV later this fall 2012. 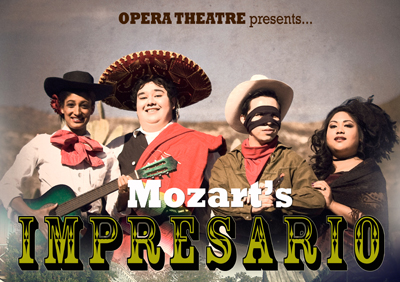 Dr. Fraser’s innovative, modern and zany adaptations of the standard operatic repertoire have led to consecutive sold out performances since her time of hire at Cal State San Bernardino in 2007. Recent productions include Mozart’s Impresario set in the Wild West, San Bernardino, 1882, with dialogue adaptation by Dr. Terry Donovan Smith.

Jacques Offenbach's RSVP: or a Musicale at Mr. Cauliflower’s 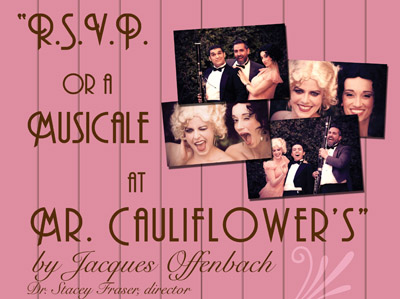 Mozart’s Cosi fan tutte, set in the beloved Harris Company Department Store, City of San Bernardino, circa 1964 and Offenbach’s RSVP: or a Musicale at Mr. Cauliflower’s set in the Roaring 20’s New York City, circa 1928. The operas are performed with full orchestra, many of whose members are union musicians of the Los Angles greater metro area. Elaborate sets and costumes are also an integral part of our productions.