Opportunities and Trade-offs in Transportation: Maintaining the Region’s Competitiveness and Quality of Life

The region’s future competitiveness and quality of life is dependent upon mobility -- the ability of goods and people to move quickly and efficiently. A possible inhibitor is that planning, development, and infrastructure decisions are locally, project based and generally tied to specific funding. Though collaboration happens, there is a lot of competition and a true regional perspective is difficult to achieve.  The larger questions for the February 20 dialogue are:

1. Is the best option having the region capitalize as much as possible on the growth that is occurring and look to the market or technology to improve mobility?

2. Do decision makers and regional leaders work collaboratively to develop projects with a shared vision that ultimately to reduce competition and repetition? 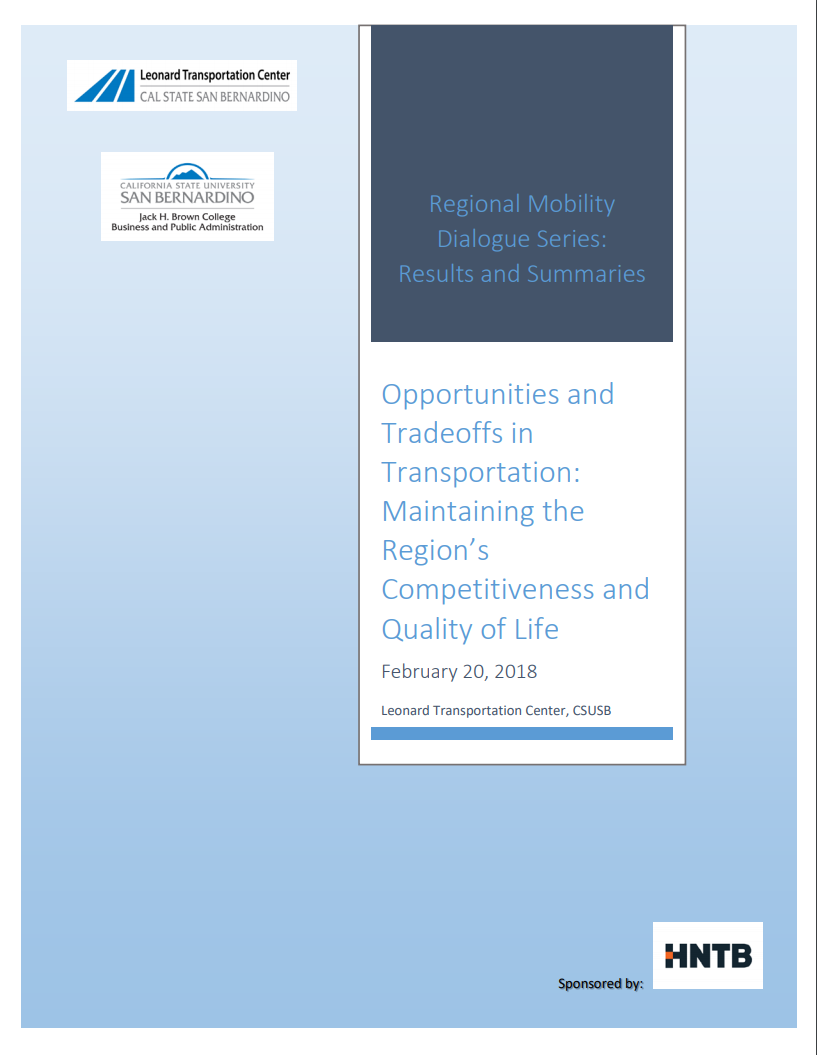 San Bernardino County Second District Supervisor Janice Rutherford was elected to the Board of Supervisors in November 2010. She represents the cities of Fontana, Upland and Rancho Cucamonga as well as the unincorporated communities of Crestline, Devore, Lytle Creek, San Antonio Heights, and Mt. Baldy.

Supervisor Rutherford discovered the joys of community service as a Girl Scout when she participated in neighborhood cleanups and spent time with autistic children. She earned a bachelor’s degree in political science with highest honors from the University of California at Riverside before attending Claremont Graduate University where she earned a master’s degree in American politics.

After graduate school, Supervisor Rutherford took an active role in supporting the Fontana Boys and Girls Club and the local Boy Scout district. She was appointed to serve on the Fontana Parks and Recreation Commission in 1997 and also served on the Fontana Planning Commission, including one term as Chairperson.

Voters elected Supervisor Rutherford to the Fontana City Council in 2000 and re-elected her in 2004 and 2008. She served as Mayor Pro-Tem from 2002 to 2004 and also served as Chair of the Fontana Redevelopment Agency and President of the Fontana Fire Protection District.

As a member of the Fontana Rotary Club, Supervisor Rutherford has worked to promote literacy and has also volunteered for other community service projects, including providing relief for Gulf Coast communities devastated by Hurricane Katrina. She serves on the Fontana Boys and Girls Club Board of Directors, the Chaffey College Foundation Board, the Junior State Foundation and the Fontana Art Association.

Prior to her election to the Board of Supervisors, Rutherford worked as a Taxpayer Advocate and Public Affairs Director for Board of Equalization Member Bill Leonard. Supervisor Rutherford has also worked as a motivational speaker and trainer, and has provided consulting services to private sector businesses, government agencies, and educational organizations.

Supervisor Rutherford lives in the City of Fontana with her husband, Steve Lim and their two young boys, Ethan and Noah. As a family they enjoy camping, biking, canoeing, and hiking. Janice is also an avid reader and scrapbooker.

Tom Gross is currently the Manager of Environmental Affairs at Southern California Edison.  Mr. Gross has been involved in environmental compliance and policy work for over 25 years.  He has worked extensively in the areas of hazardous waste management, water quality and NPDES compliance.  He has managed site remediation activity and has experience managing PCB clean up activity as required by the Toxic Substances Control Act.

Mr. Gross has been recognized nationally as an expert in the field of Transportation of Hazardous Materials and has testified before the United States Congress on this issue.  He has worked the last eight years on air quality policy issues.  Mr. Gross is also a licensed attorney and has worked as in-house counsel in the Environmental Section for Southern California Edison.  He holds a Bachelor's Degree from San Diego State University.  He also has a Master's Degree in Business Administration and a Juris Doctor from the University of La Verne.

Jim was first elected in November, 2013, after a recall election. The previous Council was responsible for not only for the Chapter 9 bankruptcy, but also for the terrible dysfunction throughout the City’s administration and provision of services. So he ran for office: to remove San Bernardino from bankruptcy; to replace an antiquated city charter that promoted much of the administrative dysfunction; to bring more compatible and strategic thinking to the Council.  He was re-elected for a full four-year term in February, 2016.

He is Professor Emeritus at California State University, San Bernardino, having taught there for 31 years. He came to California State College, San Bernardino in 1981 to teach City Planning and Urban Studies. It turned-out to be the beginning of a time of great change for the City -- and he became greatly involved in the city’s affairs. The region was growing very rapidly, plus, in anticipation of the 1986 Federal Tax Law changes, there was a flood of development applications for multi-family dwellings. Unfortunately, the City did not have an adequate development review process or general plan to accommodate this growth. The result was increasing stress on all public services. After a court challenge of the adequacy of its general plan and development review process, the City was forced to halt all land use development in 1987, until its general plan was updated.

There were other important land use that he participated in, e.g. the halting of the “Lakes and Streams” project that would have placed much of downtown San Bernardino under water. He was also on the Project Development Team for the sbX bus rapid transit system and the related downtown Transit Center and Redlands light-rail.

In 2017, Jim was elected District 7 Representative to the Southern California Association of Government’s (SCAG) Regional Council.

Jim has published research and presented papers on a range of topics, but has focused on land use and growth management issues. He is a member of the American Institute of Certified Planners and has received several recognitions, among them the 2012 Distinguished Leadership Award – Professional Planner, from the California Chapter, American Planning Association.

He has a daughter, Carolyn, an environmental planner with the U.S. Environmental Protection Agency in San Francisco