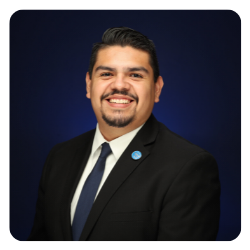 Alfredo Barcenas (he/him/el) began his work in the Associated Students, Inc. (ASI) in 2011 as a student volunteer on the activities committee. During his collegiate career, Alfredo was elected as ASI President in 2014 and was appointed as Vice President for University Affairs for the California State Student Association in 2015. In 2016 he was hired to serve as a Programming Coordinator to help assist with the expansion of the Santos Manuel Student Union. In 2018, Alfredo shifted his role in ASI to focus on policy development as the Policies and Legislative Specialist and was then promoted to lead ASI’s legislative and civic engagement portfolios as Associate Director in 2020.

Aside from his roles within student affairs, Alfredo is a board member of the CSUSB Latino Alumni Chapter, is an alumnus of the Congressional Hispanic Caucus Institute, and served as Chair of the CSUSB Staff Council (2019-2021). In 2019, Alfredo was named the outstanding employee within the Division of Student Affairs and was a recipient of the 30 under 30 award for California’s 47th Assembly District. As Interim Executive Director, Alfredo remains committed to ensuring ASI advocates on behalf of CSUSB students at the local, state, and federal levels while developing the next generation of student leaders.

Alfredo holds a Bachelor of Arts in Political Science from Cal State San Bernardino and a Masters in Public Policy from the University of California, Riverside. 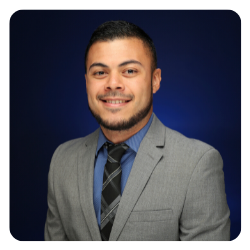 Herbert Gonzalez (he/him/his) is a proud alumnus of CSUSB and a first generation college graduate. His involvement on campus stemmed from his student employee position in the Santos Manuel Student Union as an event programmer. Herbert graduated in 2015 with his Bachelor of Arts in Mass Media. A year after graduation, he returned to work at CSUSB as a full-time staff in the Division of Student Affairs as the executive assistant to the Dean of Students.

Herbert joined ASI in July 2018 as a Leadership and Assessment Coordinator, and then served as the Senior Program Coordinator. In these roles, he oversaw the areas of assessment, programming, marketing, and graphic design. In May of 2021, Herbert was promoted to serve as the Interim Associate Director. In his current role, Herbert works with the ASI Legislative Affairs team, and oversees communications and staff operations for the corporation. 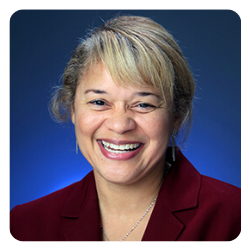 In her role as Executive Assistant, Dacia is responsible for the daily administrative operations in support of a student run office and supervises student assistants working at the front desk and the College Legal Clinic.

During her tenure at ASI, Dacia has received several forms of recognition which have included service awards, various Certificates of Appreciation, a Certificate of Excellence, Outstanding Staff of the Quarter, and a Student Centeredness Award. The Dacia Woods scholarship was created via a resolution honoring the service members and veterans of the United States military from CSUSB.

Dacia is a retired member of the United States Air Force Reserves where she served six years on active duty and over 14 years as a reservist. Throughout her Air Force career she worked in the Medical Administrative field and later retrained and worked as a Paralegal in the Judge Advocate General's office. 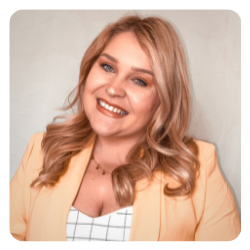 Marina Stone is currently serving CSUSB as the new Senior Program Coordinator for ASI. She is a 2021 Cal State San Bernardino alumna, having graduated with her bachelor's degree in psychology. During her time in ASI, Marina served as a Program specialist, Special Projects Coordinator, and was elected as the Executive Vice President from 2020-2021. Outside of ASI, Marina has previously served as the President of Alpha Delta Pi, and the National Panhellenic Council at CSUSB. In her current role, she leads the ASI Productions team, which includes programs, marketing, graphics and Palm Desert campus departments.