The Educational Opportunity Program emerged from the Civil Rights movement in the late 1960’s as a response to the call for access and equity in higher education. As a result of this hard fought, student led campaign, there is now an EOP Program at all 23 CSU campuses.

Before the official formation of EOP, there were many students and community members across California demanding the recruitment of and access for minority students in higher education. Their request also included diversity among faculty and staff and for the academic curriculum to reflect the historical perspective of diverse populations.

September 1968: The California State College System began "Experimental," programs at a few CSU campuses. Participating campuses at the time were Long Beach, Los Angeles, Northridge, San Diego, San Jose, San Francisco and Cal State San Bernardino. The CSU initiated the start of these pilot programs to assess their success in serving underrepresented students. Shortly thereafter a bill was introduced for consideration for programs to be established across the state.

Lawrence (Larry) Johnson was appointed Director of the "Experimental Admissions Program," which later become the Educational Opportunity Program. He and his small staff moved into the first office dedicated to EOP in one of three trailers behind old Library Building.

May 1970: President Pfau calls a meeting with administrators and faculty to discuss demands by African American students to increase campus minority representation and opportunities.

June 1970: George A. Meneses is named Assistant Director of the Educational Opportunity Program. 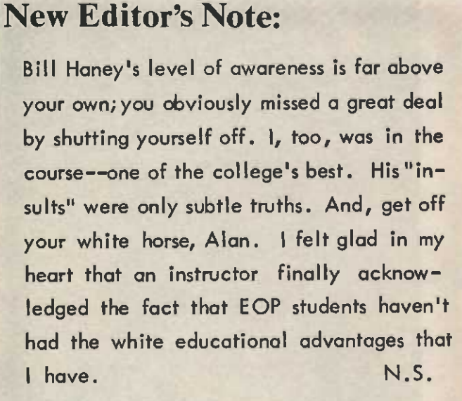 May 1971: California State College, San Bernardino receives a $12,500 grant from the California Coordinating Council for Higher Education, and a $3,920 grant from IBM to support EOP.  The campus newspaper, new editor, responds to a letter about the services for EOP students:

June 1971:  CSUSB receives a $2,000 grant from the IBM Corporation to help fund EOP.  EOP moves into the old Library Building renamed Student Services Building after the completion of the new Library.

September 1971: George A. Meneses resigns as Assistant Dean of Students.

October 1971: The Black Student Union accuses the campus of not being supportive of Director of EOP program.

Summer 1972: The Dean of Students of California State College, San Bernardino, Dr. Kenton Monroe, recruited Dr. Tom M. Rivera to become the director of EOP. After much discussion, Dr. Rivera accepted the position when the College changed the title to Associate Dean of Educational Opportunity Program and when both President John Pfau and Dean Monroe committed to mainstreaming EOP as an integral part of the Student Services Division. It was also agreed at the time, that the EOP program would be moved and housed in the division’s building, rather than in the trailers. Dr. Tom M. Rivera named Associate Dean of Students for EOP. 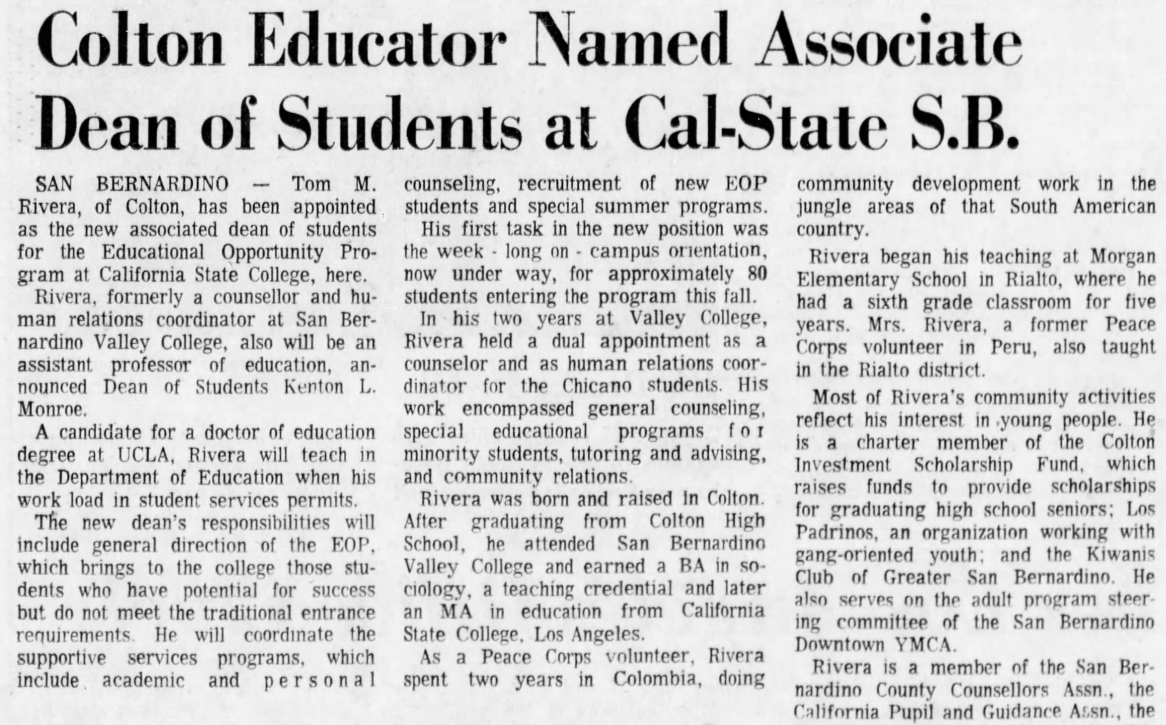 Dr. Tom Rivera had direct supervision over Educational Support Services, which included EOP for approximately 25 years and he and his team contributed a great deal in the growth for the student services division. They were instrumental in developing and expanding, outreach, retention and academic advising services for the unit. The Educational Support Services Office was eventually renamed to the Office of Undergraduate Studies. 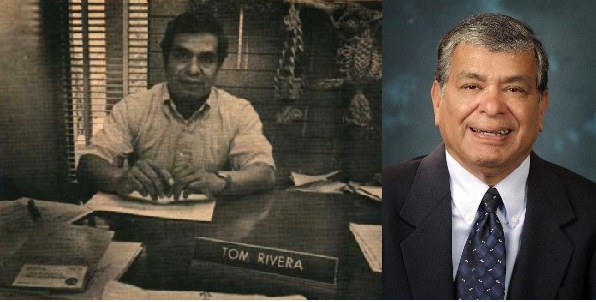 Fall of 1972: EOP Coordinates orientation for 78 new EOP students.  Twenty-five of them becoming the first ever occupants of Serrano Village Residence Halls.  Presentations were provided by members of Student Services staff, including Dr. Ernest García, Professor of Education. 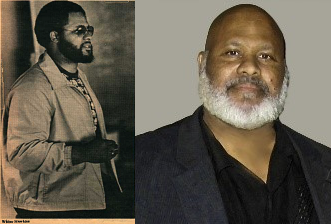 August 1975: Walter S. Hawkins, Director of Upward Bound, named Director of EOP for Educational Supportive Services Unit. During his leadership and with the support of his team, and the Associate Dean, Dr. Tom Rivera, EOP continued to enhance and develop a very comprehensive list of student support services. These services included the first early warning/intervention system (progress reports) at the university, tutoring support (Learning Center) for students, specifically for math and English courses and expanded to other subject matters, such as a reading course which eventually evolved to University Studies 100 Seminar, regular mandatory academic advising procedures, and other support services which the university began to expand to other students in the late 1980’s. After his leadership tenure with EOP, he went on to serve as the Director of Research & Policy for the Department of Undergraduate Studies at CSU San Bernardino until his retirement.

November 1978: Governor Brown suggests to the California State University College Board of Trustees that California State College, San Bernardino be combined with UC Riverside, due to low enrollment at both campuses.

September 1985: The first Academic Advising Center was created on first floor of Pfau Library to assist freshman and transfers with undeclared advising and basic skills placement. Prior to 1986, student academic advising was primarily done by individual faculty and the Educational Opportunity Program. The Student Assistance in Learning program (SAIL) also began to advise students on academic matters when established in the early 1980’s.

October 1985: The Black Voice newspaper alleges that CSUSB has made insufficient efforts to recruit minority administrators, faculty, and students; President Evans responds with a letter to editor.

October 1991: Taft T. Newman Jr. a licensed Marriage, Family & Clinical Therapist was named Director of EOP. Prior to being named Director, he served as an EOP Counselor at CSU San Bernardino from 1978-1988 and as a Lead EOP Counselor Coordinator from 1988-1991. During his tenure with EOP he worked diligently in expanding community relations and partnerships, building rapport with CSUSB Faculty and had much success in increasing scholarships for EOP students. Most notably the JoAnne Vance Memorial Scholarship named after a former CSUSB EOP student and founder of the largest female-headed construction company in southern California at the time. Taft was also a founding member of Ecclesia Christian Fellowship Church in San Bernardino, CA. and founder and director of Agape Academy, a tutoring and motivational community program for high school students. For many years prior, he also served as a Deacon Board member for Loveland Church.

September 1999: Enedina (Nadine) Chavez is named Interim Director of EOP, replacing late Taft T. Newman. Nadine started at CSU San Bernardino as an EOP Counselor in 1978. During her near 31-year tenure with EOP, she was coordinator of EOP Counseling services, assistant director and director of EOP.  Under her leadership the EOP Alumni chapter was established, EOP services were expanded to offer comprehensive direct support to Foster Youth by establishing the EOP Foster Youth pilot program. Due to the success of the CSUSB EOP program, she was asked to serve as a consultant to establish the first EOP program at CSU, Channel Islands a new campus that opened in 2002 within the CSU system. She also served as a team member of the American Association of State Colleges & Universities (AASCU) National Study of Hispanic Student Success.

January 2003: While attempting to balance the state’s budget, then Governor, Arnold Schwarzenegger proposes the elimination of EOP and other outreach programs. The first ever CSU statewide EOP Alumni Chapter is formed at CSU San Bernardino in response to proposed program cut. Hundreds of CSU EOP Alumni, students and faculty travel to Sacramento to fight back and protest Gov. Schwarzenegger proposed elimination of EOP. After a tumultuous period, the EOP program continues within the CSU system.

Summer of 2003: With the support of CSUSB President, Dr. Albert Karnig, EOP establishes Foster Youth program services the first at CSU San Bernardino, a program committed to helping students who were current or former foster youth.

Fall of 2007: EOP receives a grant from the California Wellness Foundation and the Children’s Fund of San Bernardino county to provide comprehensive support services to foster youth students. 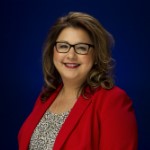