The objectives of the LEAD summit are: 1) to promote a broad-based awareness of the crisis in Latino Education and; 2) to enhance the intellectual, cultural and personal development of our community's educators, administrators, leaders and students.

Our free one-day summit will:

Leadership: encourage leadership through our inspirational speakers. We ask ourselves: What are effective leadership strategies during these tumultuous times? As change agents, how do we think outside the box? What are effective innovations for closing the achievement gap, student retention and success; student services; teaching and academic affairs?

Diversity: provide education and resources in partnership with other educators to promote respect for differences and an appreciation of diversity. We ask ourselves: How can we best provide a challenging and supportive atmosphere for gender, racial and ethnic minorities?

Higher Education: encourage and provide opportunities for Latinos to attend college by sharing information regarding the California Law AB540, Financial Resources to help pay for college, and information/recruitment to the plethora of advanced degrees offered by CSUSB, particularly the Ed.D. Doctorate Program in Educational Leadership.

Culture and Arts: celebrate our Latino heritage, spirit and achievement with displays of Latino art, music and history. This summit will provide a good opportunity to take a deeper look into the Latino family values that make Latinos a particular group by discussing our preferences, motivations, expectations and the impact of some of our cultural traits in educational endeavors as well as their linkages to the U.S. workplace and economy.

Resources: provide teaching resources and partners for teaching through our research, educational programs and the exhibits on display during the summit. 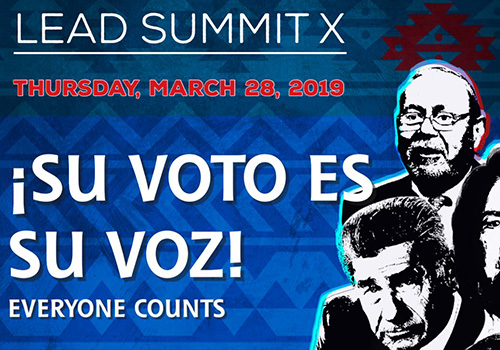 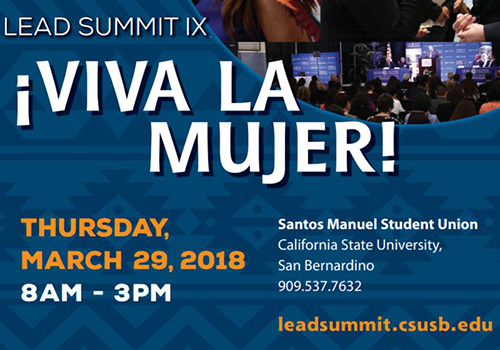 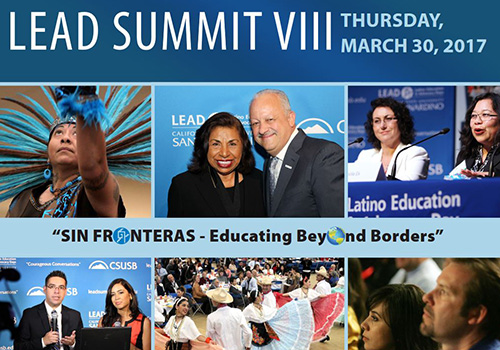 For the U.S. to create a positive future it will require a Latino citizenry that more greatly participates in the American democratic process, and that is poised to shape the U.S. political landscape through voting and civic engagement.

As we represent a significant portion of this country's future strength, we must achieve a dramatic and powerful change in our communities, one that necessitates civic courage, social action, public service, and the creation of leadership opportunities.

Latinos have also been frustrated with decennial Census projections that historically underestimate the Latino population growth. The push to be accurately counted has always been high stakes because the size of ethnic minority populations directly affects the ability to allocate federal funding for public services and to influence the way Congressional and other voting districts are drawn.

Latina girls and women make up 1-in-5 females in the United States, and by 2060 are predicted to form nearly 1/3 of the total female population. As a fast-growing and influential constituency, Latinas have made significant strides and progress in a number of areas. Yet progress has been extremely slow and there is a long way to go to fully close gender, class, educational, and racial/ethnic disparities.

Latinas are incredibly entrepreneurial, as the number and rate of Latina-owned businesses has increased eight times that of men-owned businesses...yet, remain significantly underrepresented, especially among the Fortune 500 companies. In terms of economic (in)security, the disparities are leaving a growing portion still more likely to live in poverty and as single heads of households, still earning less in the labor market (earning less than 60 cents for every dollar a white man earns for the same job).

For decades too, Latinas have been more likely to lack health coverage among America’s uninsured, and still have the least access to health care of any group of women. In terms of civic and political leadership, Latinas have a rich history of leadership in our communities, but remain underrepresented in all levels of government.

As a group, Latina females start school significantly behind other females, and without proper support and intervention are never able to completely catch up to their peers. Latinas graduate from high school at lower rates than any major subgroup, and are also the least likely of all women to obtain and complete a college degree.

We identify fronteras (as a variety of borders) as barriers that exist in education and use this metaphor to question and explain how we must transgress beyond them, so as to interrupt and examine the interactions and discourses that create separations and alienations among people.

Knowledge is not the privilege nor domain of the powerful few but a right of all people. We envision education as a vehicle for social movement development, rather than a commodity to be bought, sold, or corrupted.

Sin Fronteras: Educating Beyond Borders means we will work together with those that share our common values and belief in the conviction of the transformative power of education.

This theme reflects the educational disparities affecting both Latino and black students. Meaning, the crisis in education is shared equally among black and of course other indigenous people.
So we made a special effort to address the particular aspects that we believe will help create a positive future.

Among the discussion strands were Black Brown Indigenous Unity, Violence and Indigenous Rootedness, Latino and African American Student Achievement, the Rising Selectivity at Public Universities, and the promotion of Ethnic Studies at the high school level.

Global Latino Education and Advocacy Days was held in San Antonio, Texas and brought together an international group of educators, scholars, activists and community members to engage in conversation about the issues related to Latino education worldwide.
Global LEAD focused on engaging dialogue in order to help create bridges between Latino Education in Latin America and US Representatives. The aim to establish a formal Researcher-Practitioner Partnership in Global Education Research.

The intent was to make a collective commitment to identify and investigate relevant educational issues; make joint decisions to develop innovative models that lead to improving student achievement, social and behavioral development; build an international alliance between researchers and participants in the planning, implementation, and dissemination of the research process, findings, and sustainability (development and implementation of future research projects).

Latino male students are “vanishing” from the education pipeline, a trend that is especially evident at the secondary and postsecondary levels. The question of why Latino males are vanishing from America's colleges is complex.

The 16 million Latino children and youth currently in America represent a crucial segment of our country’s future workers, taxpayers, parents, citizens, voters, and leaders. More than one Latino child in three (35%) is poor, compared to one white child in eight, making them less likely to finish high school, more likely to be poor as young adults, and less likely to be working between the ages of 25 and 29. That Latino teens are currently more than twice as likely to drop out of high school, coupled with risk resultant from exposure to protracted poverty, limits the life prospects of high school dropouts.

Latinos make up the majority population in juvenile detention centers and prisons. The school-to-prison pipeline is marginalizing schools, communities, and families by derailing the educational success and progress of Latino youth. It restricts and excludes youth from the labor market and promotes mistrust and resentment toward authority, the criminal justice system, and all forms of social control.

America is facing a new national crisis: Far too many students are coming to college unprepared. The country is devoting increasing resources to remedial education, yet despite this, college graduation rates are far below what the United States requires to address workforce needs and remain globally competitive.

For this reason, it is vitally important for education leaders to share findings and strategies about how districts and colleges/universities can successfully tackle central challenges like college readiness.

If progress is to be made helping the many low-income high school graduates not adequately prepared for the transition to college, it will come through collaborative and innovative initiatives that strengthen education across the board—from early childhood through high school and beyond.

Focusing on Latino youth is of particular importance because the Latino population is large, growing, and relatively young, but has lower educational achievement than other groups in the nation. Addressing the educational needs of the fastest-growing community in the United States, the Latino community, is therefore vital to our local, regional, state, and national interests.

Given this importance, it is imperative to continue the work of identifying and cataloguing those programs across the U.S. that show evidence of increasing the access, opportunity, and achievement gaps for Latino students. Some programs were shaped specifically to serve young Latinos, while others serve the broader populations or focus on raising student achievement in general, but have shown strong benefits for Latino young people.

Because we know many of the programs making a difference in our community concentrate their limited funds on direct service provision rather than evaluation or marketing, our defining role for the future, as leaders and influencers, is to sustain, replicate, and bring up-to-scale those actionable practices most promising, and unveil a roadmap that is hopeful, solution-oriented and forward-thinking.

2011 LEAD Summit
Latino Education is the Economic Imperative of our time, and the Civil Rights issue of our generation

Higher education practices and policies have often narrowly focused on college access more than college completion itself. This, together with the then Obama Administration’s aims to re-establish the United States among the top ranking nations for college degree attainment by 2020, had led for a pursuit for solutions and policy changes that will help improve completion rates over the next decade.

While there may be a difference of judgment about the various pathways, there is agreement that our success in attaining these national college completion goals will be determined by how well we serve our Latino population. That is, the data is abundantly unambiguous that raising the outcome rates among United States’ growing Latino population is crucial, given that the current pace of degree completion is not sufficient.

Serving the Latino population means more than just enrolling them in colleges and universities, but more importantly improving the chances that they will complete a degree and get us to our national goal.

Why are some institutions more successful than others in helping Latino students with similar academic backgrounds earn degrees? Can we identify particular obstacles Latino students face in completing a college degree? Finally, how do we build the capacity and interagency collaboration so as to maximize the specific conditions that seem to positively affect graduation rates for our biggest and fastest growing population, and discuss the actions that can be taken to improve them?

Our inaugural theme was to address the relationship between educational achievement and marginalized groups, such as Latinos - to realize that eliminating this disparity is critical. Thus, candid and courageous conversations are necessary to help educational leaders understand why performance inequity persists and how to guide policy analysis and instructional reform that promotes true academic parity.

We therefore established that the objective of the LEAD summit would be to promote a broad-based awareness of the crisis in Latino Education and to enhance the intellectual, cultural and personal development of our community's educators, administrators, leaders and students.