Every year, the Honor Society of Phi Kappa Phi awards fifty-seven Fellowships of $5,000 each and three at $15,000 each to members entering the first year of graduate or professional study. Each Phi Kappa Phi chapter may select one candidate from among its local applicants to compete for the Society-wide awards. 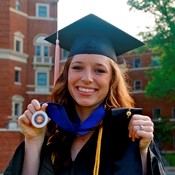 Several of Phi Kappa Phi's Fellowships have been endowed by generous donors. Below is a list that details the Society's named fellowships and the contributors who made them possible: