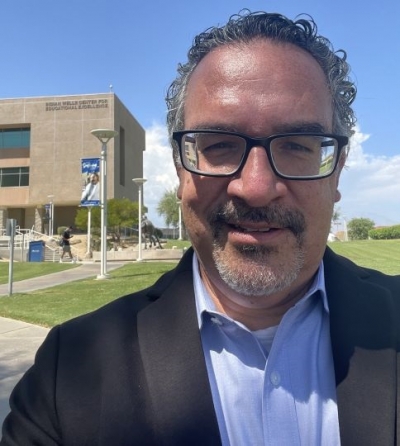 My collaborative work as part of the American Sociological Association on First Generation and Working Class Persons in Sociology has led to the collection of a nationally representative survey sample of FGWC faculty and graduate students. This work culminated in an American Sociological Association executive summary. See Task Force Report. Based on the sample of graduate student respondents from our survey we currently have a Revise and Resubmit from the Sociology of Education journal. Additionally, with colleagues I have a review of the Task Force Report forthcoming in Teaching Sociology.

Dr. Idalis Villanueva and I have a forthcoming coming publication titled "Exploring the Hidden Realities of Latinx Contingent Faculty in STEM" in the Journal of Latinos and Education. Dr. Villanueva and I were awarded National Science Foundation HSI Improving STEM in Education Grant. The award funded the collection of pilot study data at the conference held on the CSUSB campus in April-2022. The conference invitees were non tenure track contingent Latino faculty. The conference is titled HSI Conference: Exploring the hidden realities of contingent Latinx faculty in STEM. Based on the findings the project team has published a manuscript with the Journal of Higher Education Management.

Inside CSUSB article about my work on campus.

I have several ongoing STEM Education projects under development. I will serve as a consultant on the following grant “Broadening Participation in Engineering: Inclusive Mentoring Hubs (IM Hubs) project will support the formation of an inclusive mentoring hub called Raíces (or roots in Spanish) Institute for Transformative Advocacy whose purpose is to equip nonwhite  contingent faculty in engineering of all intersectional identities, to form their own transformative grassroots advocacy strategies, using hidden curriculum strategies, for attaining equity in promotion pathways and working conditions at their hiring academic institutions.  Additionally, I am collaborating with Frank Gomez (Chancellors Office/CSU STEM NET) and other CSU STEM Faculty on a HSI Program Network Resource Centers and Hubs NSF grant proposal. Finally, I am collaborating with researchers within the CSU system on an S-STEM grant.

My other collaborative work involves a focus on Inland Southern California and its historical significance in the ways we understand the development of race, ethnicity, gender, civil rights, entrepreneurship, labor, and social movements in California, the American West, and throughout the United States. Given this fact I and numerous colleagues with deep ties to the region have embarked on developing a grant proposal for the purpose of holding a National Endowment for the Humanities sponsored convening on I.E.-public history. If funded, then this project would convene an event at CSUSB where as many as 30 scholars who center their work on the I.E., would participate. This project would culminate in an edited volume on the region. And finally, I have mentored student researchers which has to a book chapter with three former undergraduate students in LatinxTV in the Twenty-First Century edited by Frederick Aldama. The chapter is titled (2022) “Latinxs in Primetime: A Look at Television Mental Health Portrayals.”

I held the position of Visiting Scholar at UCLA's Institute of American Cultures and was affiliated with the Chicano Studies Research Center (2020-2021).