On behalf of our faculty, staff, and students, welcome to Department of Mathematics at CSU San Bernardino. We are excited about your interest in our programs and our campus.

Faculty.  We have a strong and diverse faculty who are dedicated to teaching and promoting excellence through activities such as mentoring and student research.

Community.  Our CSUSB mathematical community is known for being warm, welcoming, and supportive.   Our classes are relatively small, especially at the upper division level.  This helps promote great interaction between students and instructors and helps develop a strong sense of community.

Most of our students are the first in their families to go to college. More than half of our students are members of minority groups, and one quarter are from groups traditionally underrepresented in the sciences. CSUSB is nationally recognized as a Hispanic Serving Institution (HSI) and we are one of the top mathematics departments in graduating Hispanic students.

We encourage you to be an active participant in our community by attending colloquia, joining the Math Club, coming to Tea Time, and stopping by our Math Gym. 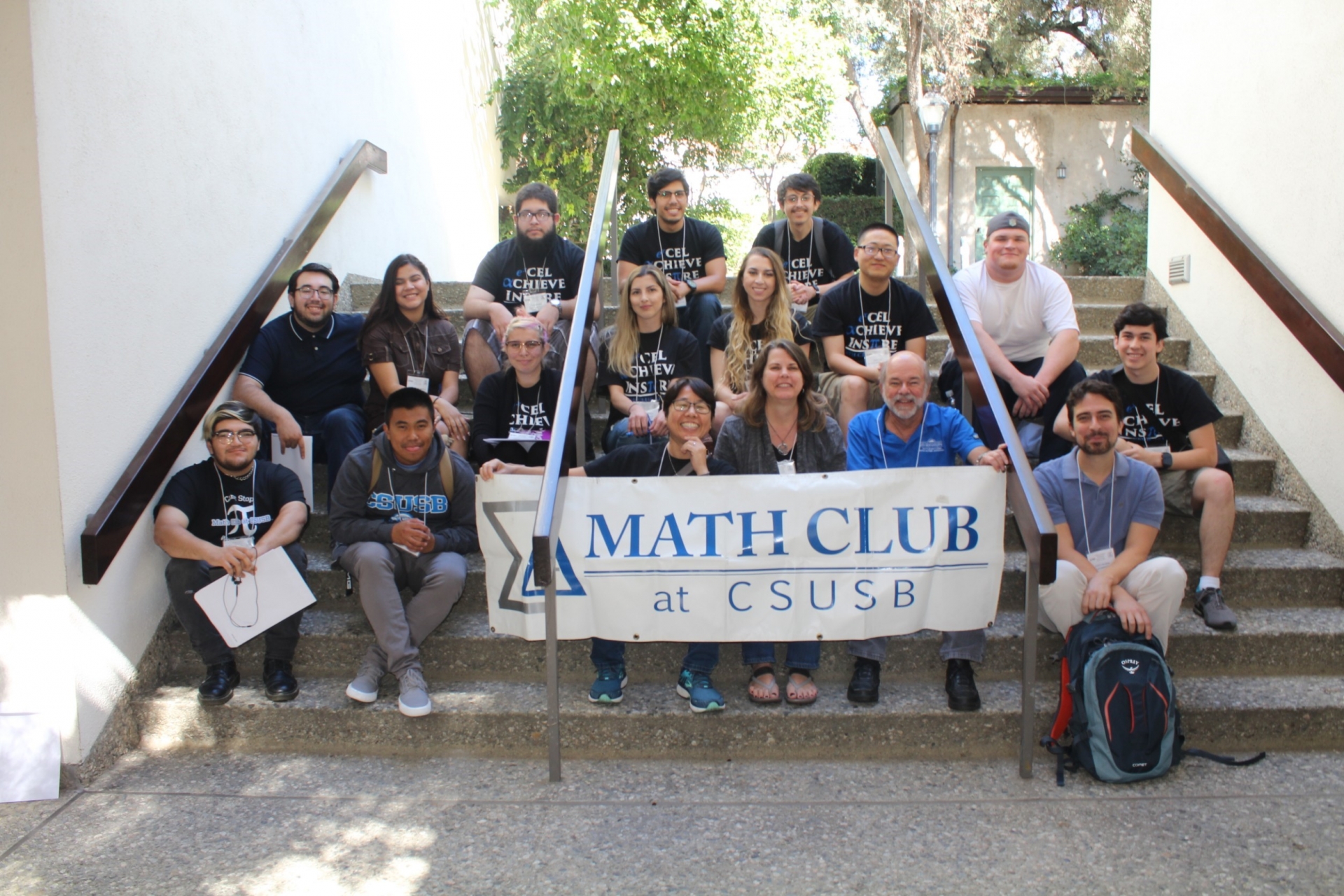 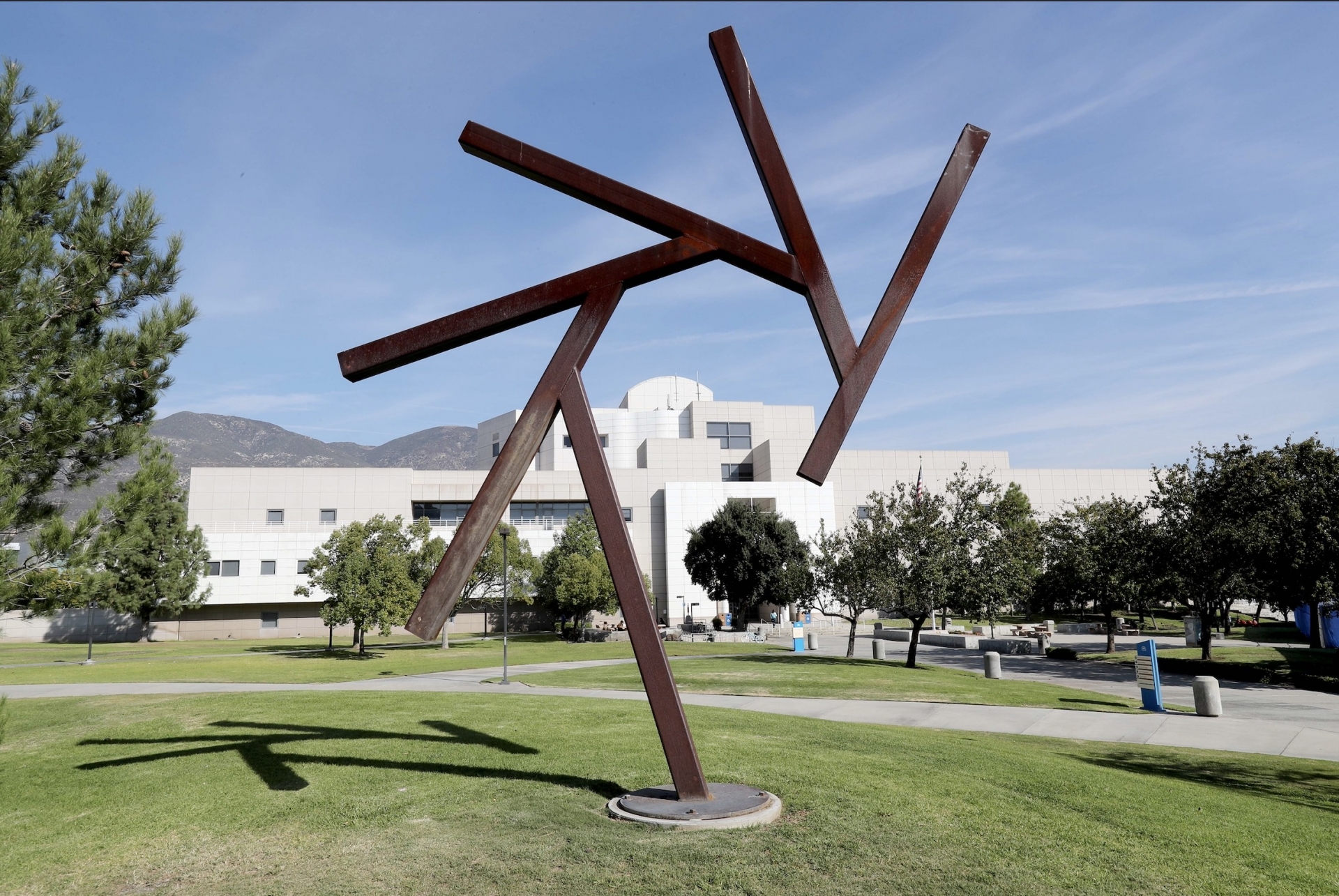 Degrees.  The Department of Mathematics is one of nine departments within the College of Natural Sciences. We offer four bachelor degrees, two masters degrees, as well as a minor in mathematics, a Certificate in Introductory Actuarial Mathematics, and a Subject Matter Authorization.

The undergraduate degrees can prepare you for a quantitative reasoning related job in the public or private sector, a career in teaching, or an advanced degree. The Master of Arts degree is intended for those wishing to pursue a career in teaching at the community college level or who wish to go on to study for a Ph. D. in mathematics or a related field. The Master of Arts in Teaching Mathematics is geared toward those who wish to become leaders and specialists in mathematics in the secondary school systems.

Mathematics can be more than just a subject in school; it can be a career. The government is the number one single employer of mathematicians in the country. Many of those mathematicians end up at the National Security Agency, where they find careers in research, information assurance, and cryptanalysis. This talk will be an introduction to the roles of mathematicians at NSA, as well as basics of cryptography.

Dr. Carla Cotwright-Williams serves as a Technical Director within the Department of Defense (DoD).  She served as the first Chief of Data Science and Artificial Intelligence at the Joint Artificial Intelligence Center (JAIC) - the DoD’s Center of Excellence for AI.  She’s also worked as a data scientist.  Prior to working with the DoD, she began her public service in academia - serving over 10 years in research and teaching.   She has conducted research with both NASA and the U.S. Navy.  In 2012, she was awarded the American Mathematical Society (AMS) Congressional Fellowship.  During her time on Capitol Hill, she worked as a staffer on the majority staff of the U.S. Senate Homeland Security and Government Affairs Committee.  In addition to covering a number of policy areas, she worked on the congressional hearing examining emergency preparedness surrounding the 2013 Boston Marathon Bombings.

She has served as a Hardy-Apfel Information Technology (IT) Fellow at the U.S. Social Security Administration headquarters in Baltimore, MD.  As an IT Fellow, Dr. Cotwright-Williams worked on a variety of high-profile agency IT projects including creating fraud analytics in the Office of Anti-Fraud Programs and the launch of SSA’s cloud infrastructure (Enterprise Data Warehouse (EDW)) whose primary goal is to improve accessibility to a critical asset, its data.

Dr. Cotwright-Williams is the chair of Policy and Advocacy and a member-at-large for the Executive Committee of the Association of Women in Mathematics (AWM).

Dr. Cotwright-Williams holds a Ph.D. in Mathematics.  Prior to that, she earned her bachelor’s degree in mathematics at California State University, Long Beach.  A 2019 autobiographical paper entitled Mathematicians Journey to Public Service was published by Springer.  She has been an invited speaker and panelist across the U.S. speaking to audiences about her research, career transitions, and mentoring. 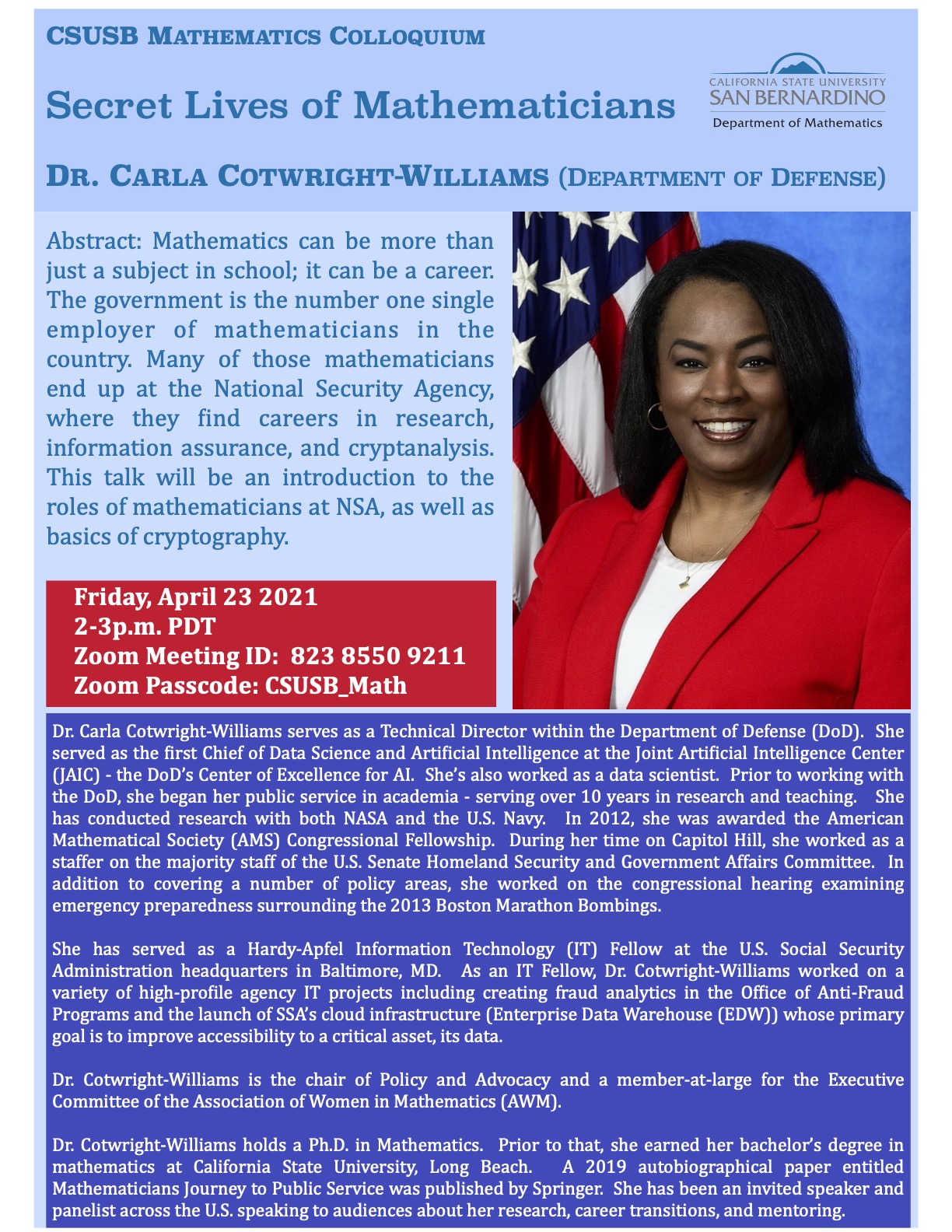