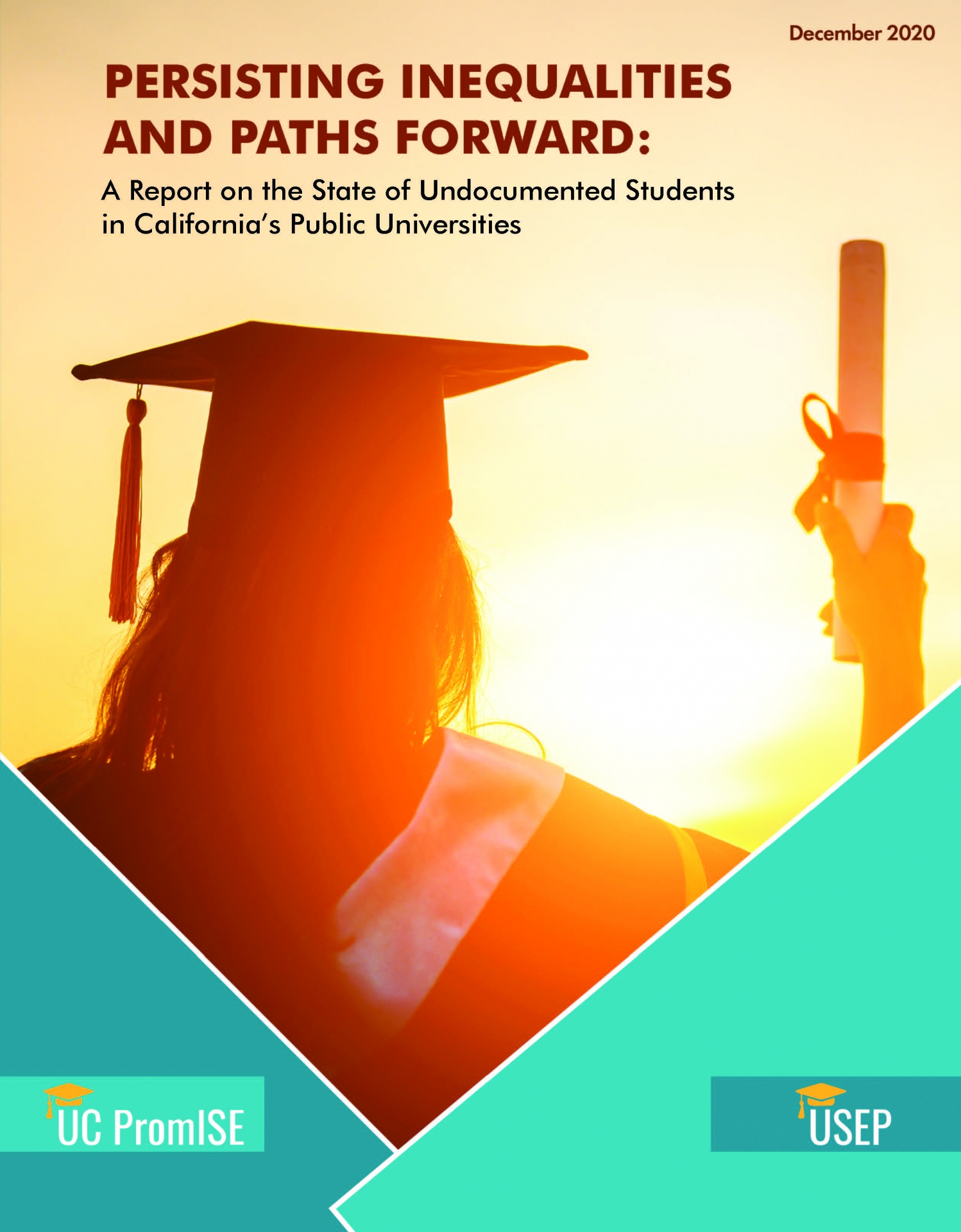 PERSISTING INEQUALITIES AND PATHS FORWARD:
A Report on the State of Undocumented Students in California’s Public Universities

This report is the result of a collective research effort between the UC Collaborative to Promote Immigrant and Student Equity (UC PromISE) and the Undocumented Student Equity Project (USEP). Both generate research with the goal of informing policies and practices that will advance equity and inclusion for undocumented students.

Forthcoming- Special Issue of the Journal of Latinos and Education - Topic: Undocumented Students

CSUSB has always been very supportive of student success and has demonstrated a strong commitment to undocumented members of our campus community. There are numerous examples and demonstrative evidence.

Nearly 20 years ago, in the 2000s our campus established Students for Equal Access to Education at California State University, San Bernardino; which was the first undocumented student support group on campus. Then of course our students, faculty and staff participated in the now famous “Rally for the Undocumented” to raise awareness on the injustice undocumented people of all ages face in this country.

We were among the first to hold the very first Youth Empowerment trainings for undocumented youth. We also worked with MALDEF in late 2002 to produce AB 540 Materials.

Since January 1, 2002, California’s AB 540 law had allowed undocumented immigrant students in pursuit of a higher education who meet specific requirements to be exempt from paying out-of-state tuition fees.

Since 2007 we have co-sponsored Annual Immigrant Youth Empowerment Conferences throughout CA.

In 2010 our campus produced the first nationwide virtual programming on CA’s AB 540, to serve as model for the nation. In 2010 also produced national virtual programming on the DREAM Act. In 2010 we also co-hosted an event in partnership with the Inland Empire DREAM Team, "Undocumented Town Hall". We also co-sponsored Dreams and Education: AB 540 & DREAM Act Conference.

And in the same year, we co-sponsored the first-ever West Coast DREAM Graduation, held June 30th, 2012.

In 2014 our campus joined the NATIONAL SCHOLARSHIP PROGRAM FOR UNDOCUMENTED IMMIGRANT STUDENTS, the first of its kind.

Our campus president also, among his early initiatives, organized the Immigration Reform Event (April 2013). Also first to offer campus presentations on UNDOCUMENTED WOMEN with the WOMEN'S RESOURCE CENTER, LEAD, AND THE MEXICAN CONSULATE. We also featured the full story of Dr. Alfredo Quiñones-Hinojosa, M.D., an undocumented immigrant from Mexicali, Mexico who was working the vegetable fields of the Central Valley in California when he "jumped the fence" in 1987 at age 19. Dr. Alfredo Quiñones-Hinojosa, M.D. went on, after a long educational journey, to the John Hopkins School of Medicine as a neurosurgeon who teaches oncology and neurosurgery, directs a neurosurgery clinic and heads a laboratory studying brain tumors.

Since 2011 we established LEAD programming, including Feria Educativa, to inform undocumented community and prospective k-12 about higher education opportunities. We were also there in 2012 when 9 undocumented youth held a coming out of the shadows event at San Bernardino City Hall.  After they revealed their status the youth marched to the Department of Homeland Security building and engaged in non-violent civil disobedience.

This topic touches my heart, really hits home.  As the son of Mexican immigrants from Culican Sinaloa, my parents were heavily involved in social justice issues for the betterment of our communities. Until the 1990's, undocumented immigrant students were allowed to attend California's colleges and universities as state residents if they could demonstrate that they had lived in the state for a year and a day prior to application and intended to make California their home. In 1985 immigrant students won a court order that held that the Education Code precluding undocumented students from establishing residence is unconstitutional and that these students could establish state residence for tuition purposes for both the University of California (UC) and California State University (CSU) systems.

So in the mid-80’s as an EOP Counselor at Cal State Long Beach I was part of the Leticia A. Network, a coalition named after the student in the successful state district court case. Composed of counselors, teachers and employees from all three higher education segments, community advocates, students, parents, and civil rights advocates, the Network exchanged information on the policies and practices at different campuses across the state concerning the classification of undocumented students.

Then in the late 1980’s I served as REGIONAL DIRECTOR / CHIEF OF OPERATIONS of One Stop Immigration and Educational Center with many schools/offices across Southern California; and later CHIEF EXECUTIVE OFFICER of Ollin, Inc., where we back then in our case alone we helped legalize more than 10,000 families during the Immigration Reform and Control Act of 1986, known as IRCA Amnesty.

But by late 1991/early1992 the political pendulum and gains had swung back.

A UC employee in the registrar’s office named Bradford sued University of CA in an employment action, claiming that he had been forced to quit because he would not follow the Leticia A. order…and he won the injunction against the UC.  The California Student Aid Commission adopted the Bradford ruling in spring 1992, and stopped awarding Cal Grants to undocumented students. And although the California Community Colleges (CCC) was not named in the Bradford case, it issued guidelines interpreting Bradford in February 1992.

All three segments of public higher education in California were effectively closed off to newly enrolling undocumented immigrant students. With the passage of Proposition 187 in 1994, all seemed lost. Proposition 187 prohibited undocumented students from attending all public schools, from kindergarten through college and university level. Civil rights organizations immediately challenged the constitutionality of Proposition 187. I myself served on call as a teacher witness involved in the litigious effort to overturn 187; which indeed was ruled unconstitutional.

But while undocumented immigrant students were still allowed to attend California's colleges and universities, the Bradford case remained the legal rule -- regardless of how long they lived in California, they were required to pay non-resident tuition, over three times the rate that their high school classmates paid. This usually meant they could not afford the opportunity of a higher education, a loss to them and the state, especially considering they were academically eligible.

By 2011, then Governor Davis signed AB 540 (Firebaugh/Maldonado). The bill exempts undocumented immigrant students from paying out-of-state tuition if they have attended California’s high schools for three years and graduated from a California high school. While this relief does not classify undocumented students as residents, the out-of-state tuition exemption has the practical effect of making a higher education more accessible financially.

But one of the pressing issues despite the enactment of policies at all three systems of higher education implementing AB 540, is that many students and counselors still do not know about this exemption.

From 2008 through 2012 I served as the State Financial Aid Commissioner for the CA Student Aid Commission, and later the President of Edfund.  It was during this period that the 2011 CA DREAM Act passed (AB 130 and AB 131) and our Commission was charged with the implementation.

In the first year, almost 32,000 undocumented students completed a California DREAM Act application. Of those, about 7,500 received some form of Cal Grant.

In our Inland Empire region we (the LEAD Organization) also had began coordinating FREE LEAD Cash for College workshops. Jointly planned with our Partners of the IE Regional Collaborative, we had hosted more than 100 FREE Cash for College workshops across San Bernardino and Riverside Counties every year.  And in just a few years time, we had assisted more than 15,000 families in the Inland Empire to complete their FAFSA financial aid application. Our initiative has brought in more than $78 million dollars to our region in what may or would have been otherwise unclaimed financial aid monies!

- In Their Voices: Undocumented in California Public Colleges and Universities (The Campaign for College Opportunity)
https://collegecampaign.org/portfolio/in-their-voices/