Robin D.G. Kelley, Distinguished Professor of History & Gary B. Nash Endowed Chair in U.S. History at UCLA, will be the special guest at Cal State San Bernardino’s next Conversations on Race and Policing at 4 p.m. Wednesday, June 17.

Robin D.G. Kelley, Distinguished Professor of History & Gary B. Nash Endowed Chair in U.S. History at UCLA, will be the special guest at Cal State San Bernardino’s next Conversations on Race and Policing at 4 p.m. Wednesday, June 17, on Zoom.

His essays have appeared in a number of professional journals and general interest publications, and he has authored several books, the latest of which is “Africa Speaks, America Answers!: Modern Jazz in Revolutionary Times” (Harvard University Press, 2012). He is currently working on a biography of the late Grace Halsell, a “Texas-born journalist, granddaughter of Confederate slave owners, daughter of a once wealthy cattle rancher and Indian fighter, [who] began her career as a correspondent (domestic and foreign) for several Texas papers during the 1940s and 50s, eventually worked as a staff writer for President Lyndon B. Johnson, before setting out in 1968 to chemically darken her skin and live as a black woman for a year,” Kelley wrote on his webpage.

This is the third panel discussion and conversation in the series, and it comes in the aftermath of the death George Floyd while in the custody of four Minneapolis police officers on May 25. A video of the incident posted on social media has led to widespread protests, the firing of four police officers, the arrest of one officer on a second-degree murder charge, and the other three on charges of aiding and abetting second-degree murder.

Floyd’s death is the latest in which race and policing have become a source of major debates, if not flashpoints for protests.

Joining Kelley on the June 17 panel will be Daisy Ocampo, assistant professor of history at CSUSB beginning in the fall; Ahlam Muhtaseb, professor of media studies at CSUSB; Troy Williams, a Ph.D. candidate in Civil Society & Community Research at the Population Health Institute at the University of Wisconsin-Madison; and Roberto (Bobby) River, a Ph.D. candidate in sociology at UC Riverside.

The June 17 program is the latest in a series CSUSB has held to discuss race, racism and police brutality, and share possible solutions, in the wake Floyd’s death. And it will be the second of two virtual events focusing on race relations this week.

On Tuesday, June 16, at 1 p.m., the College of Arts and Letters will present “Structural Racism, Civil Disobedience, and the Road to Racial Justice in the Age of COVID-19.” 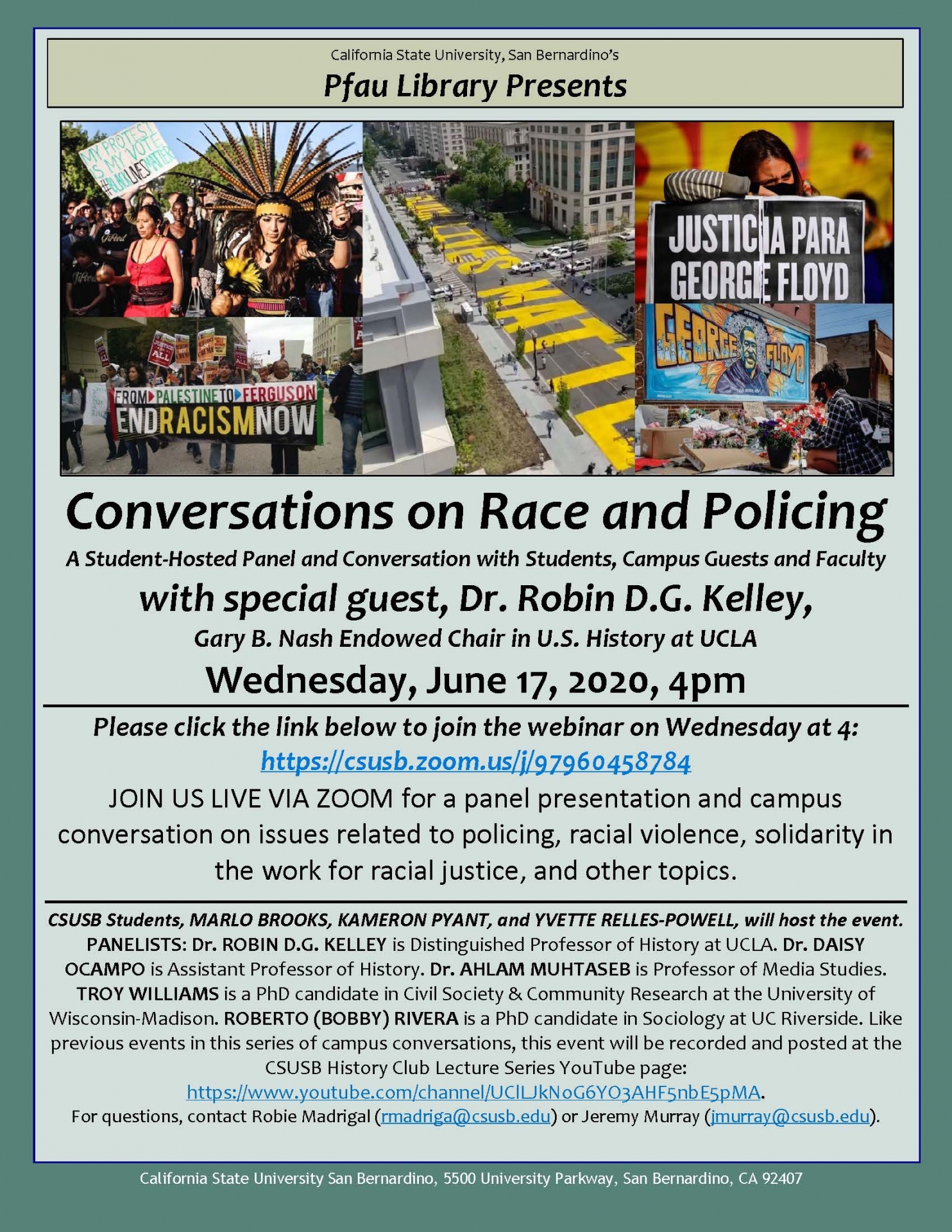