About 450 people virtually attended a memorial service hosted by the university on Tuesday to honor the memory of George Floyd and to provide an opportunity to discuss ways to combat police brutality and racism.

About 450 people virtually attended a memorial service hosted by Cal State San Bernardino on Tuesday, June 9, to honor the memory of George Floyd, who died on May 25 as the result of a Minneapolis police officer kneeling on his neck for almost nine minutes, spurring nationwide protests of police brutality and racism.

Floyd was buried on Tuesday in a grave next to his mother’s after a private funeral service in Houston. His tragic death has led to demonstrations in more than 75 U.S. cities and communities, with protestors speaking out against police brutality and the victimization of the African American community. And the ongoing protests have spread to other countries around the world.

Pastor Joshua Beckley of Ecclesia Christian Fellowship in San Bernardino gave the opening prayer. “Bless this memorial as we recognize, once again, that we are a great nation, racism is a disease, and we are greater than this disease.”

“To my knowledge, Mr. Floyd never visited our campus nor had any association with this university. What I do know, however, is his tragic death has impacted every single person at CSUSB as well as millions worldwide,” Morales said. “This memorial is convened in his memory, as well as countless additional victims of violence that have long filled the headlines and sickened our souls.”

“Too many members of the African American community have suffered, seeing their family, friends, neighbors and leaders taken from them, and us, far too soon. As human beings, we must recognize that a blow delivered against any of us strikes all of us,” Morales said. “It threatens the foundation on which this nation was founded, that every individual deserves the freedoms and equality God has granted us.” 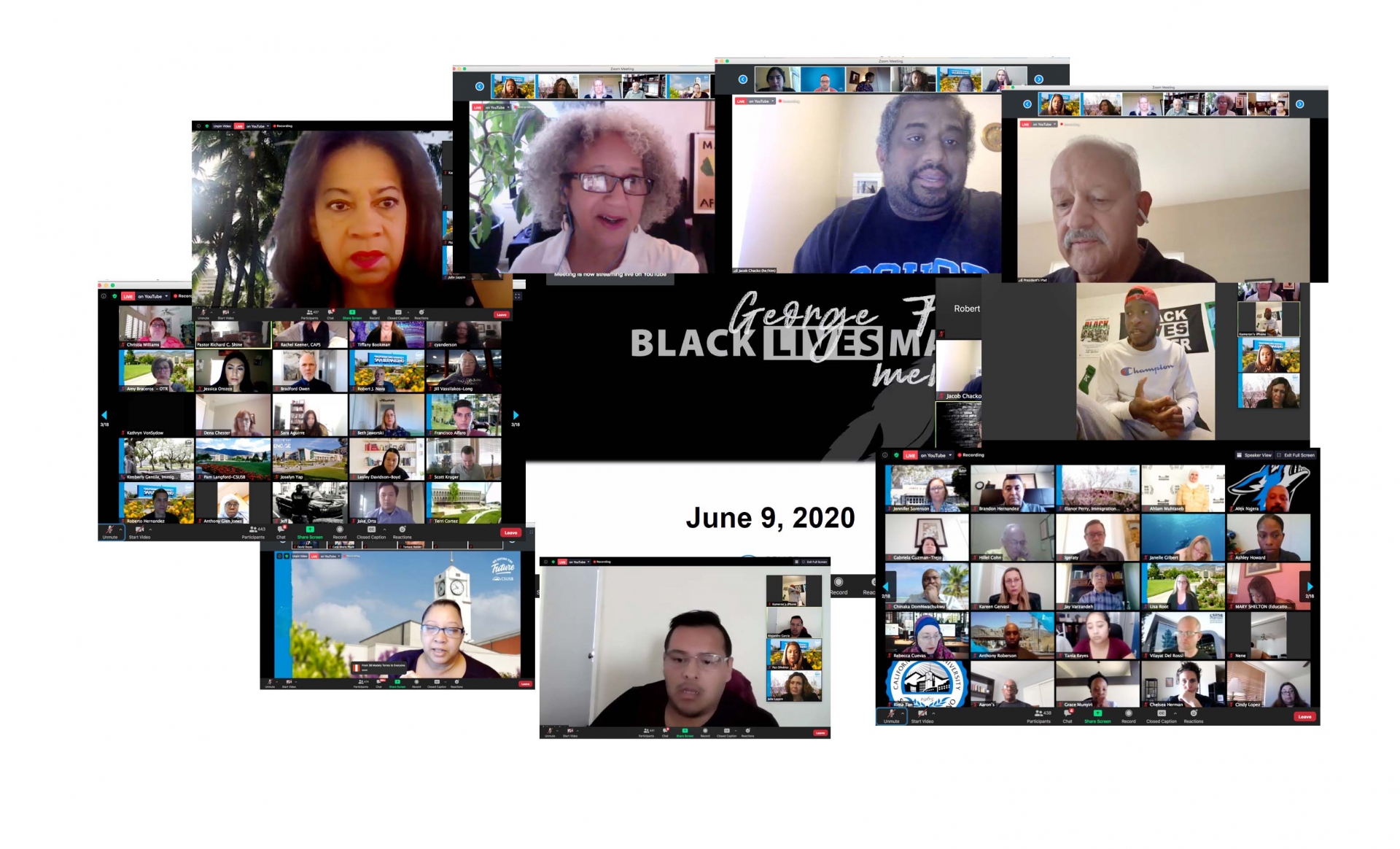 Kameron Pyant, a CSUSB English major and student staff lead for the university’s Pan African Center, said he was grateful for the memorial service, adding it was necessary to honor those who had lost their lives to racial injustice and racial discrimination.

“I just hope that one day we can see a life to where it can be a little more calm, it can be a little bit more peaceful and hopefully next time we’re not crying over another senseless death … when people will be crying is because we finally have a victory over oppression, police brutality, white supremacy, racial discrimination and racial injustice because it’s been going on far too long. It needs to stop,” Pyant said.

About a dozen people, consisting of students, staff and members of the community, spoke during the open comment portion of the memorial. Their comments included pushing for changes in society, changes to the education curriculum in how to deal with racism and brutality, dealing more proactively with communities of color, addressing white privilege, and not waiting for violence to erupt before dealing with the problems.

Alejandro Garcia, a graduate student in psychological sciences, said he would not only like to see more opportunities at the university that are first and foremost safe for the students, but also provide an avenue for some real change.

A tearful Andi Okao, human resources manager for the Santos Manuel Student Union, who said she had not had the same struggle as other African Americans as she came from a background of privilege and is a fourth-generation college student, urged non-African Americans to find out for themselves about the issues of racism, police brutality and violence toward Blacks.

“Don’t expect your Black friends to educate you,” she said. “We are trying to mentally heal and mentally survive all the time. And being requested to ‘well, help me understand, help me with this’ just keeps traumatizing us. There are resources out there. There are things out there. You can educate yourself.” 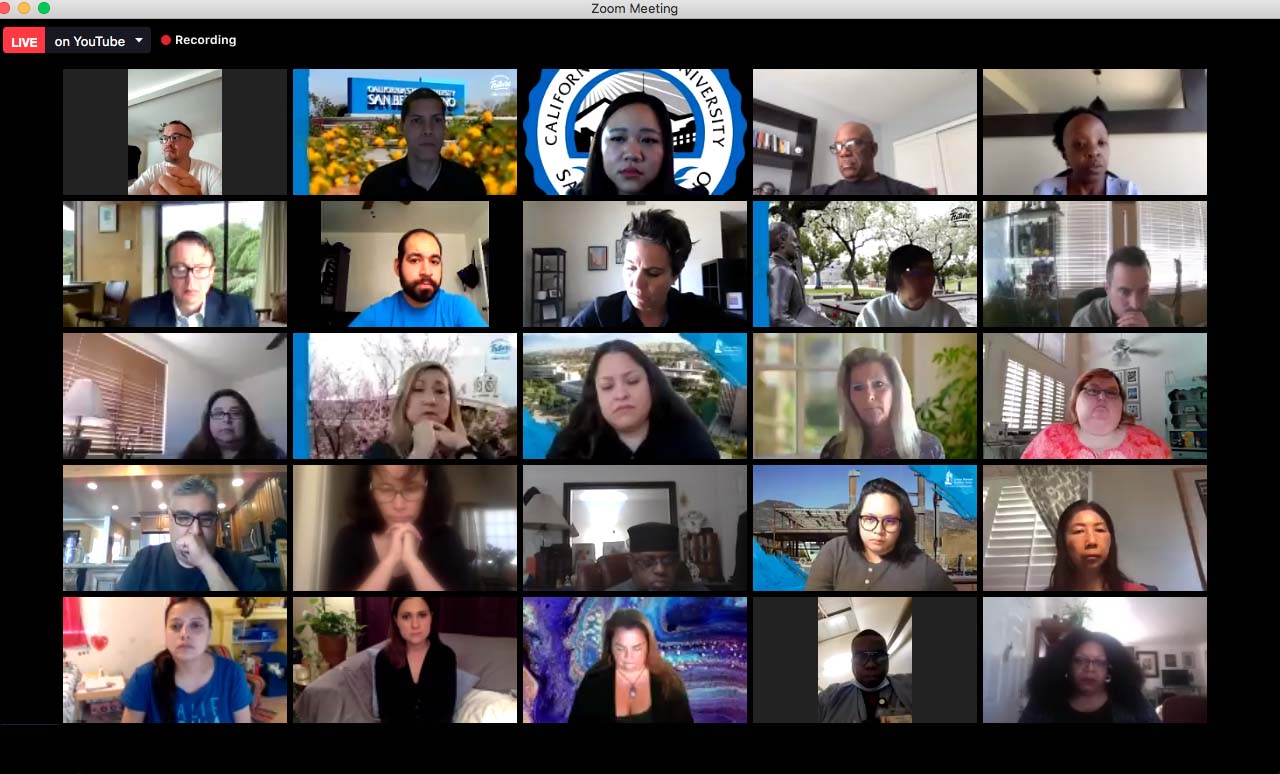 Okao also asked, “When the protests stop, when the social media stops, will you still be with us? … Don’t let this drop. Don’t let someone cry out for their mom because they’re being suffocated for a fraudulent $20 bill. That man lost his life over $20, which tells you the value that my life has to some people. Don’t forget that. Don’t let it die off.”

The event was sponsored by CSUSB’s administrative cabinet and the CSUSB Black Faculty, Staff and Student Association (BFSSA), the Associated Students, Inc. (ASI) and the Pan-African Center.