Michael German, a Fellow at the Brennan Center for Justice’s Liberty & National Security Program, and Arie Perliger, professor and director of security studies at the University of Massachusetts, Lowell, will engage in a conversation with Brian Levin, director of CSUSB’s Center for the Study of Hate and Extremism. The program is set for 1 p.m. Wednesday, Nov. 2, on Zoom.

Threats and violence by white nationalists and other extremists targeting law enforcement officers from incidents including the clash in Charlottesville, Va., in 2017, the Jan. 6, 2021, insurrection at the U.S. Capitol, and the fallout from the FBI’s confiscation of classified documents from former President Donald Trump’s Florida home, will be the focus of the next Conversations on Race and Policing at Cal State San Bernardino.

Michael German, a Fellow at the Brennan Center for Justice’s Liberty & National Security Program, and Arie Perliger, professor and director of security studies at the University of Massachusetts, Lowell, will participate the program with guest host Brian Levin, director of CSUSB’s Center for the Study of Hate and Extremism.

German, who has participated in past Conversations on Race and Policing (Sept. 23, 2020, and Jan. 27, 2021), is a former FBI agent. His work at the Brennan Center focuses on law enforcement and intelligence oversight and reform. Prior to joining the Brennan Center, German served as the policy counsel for national security and privacy for the American Civil Liberties Union’s Washington legislative office.

Perliger teaches in UMass Lowell’s School of Criminology and Justice Studies, where his expertise and research interests include political violence and extremism, security policy, and far-right politics (the U.S., Europe and Israel). Prior to teaching at UMass Lowell, Perliger was the director of terrorism studies and associate professor at the Combating Terrorism Center and Department of Social Sciences, at the U.S. Military Academy at West Point.

Levin, in addition to being director of the Center for the Study of Hate and Extremism, is a professor in CSUSB’s School of Criminology and Criminal Justice. He was recently appointed by Gov. Gavin Newsom to the first cohort of commissioners of the state’s Commission on the State of Hate. 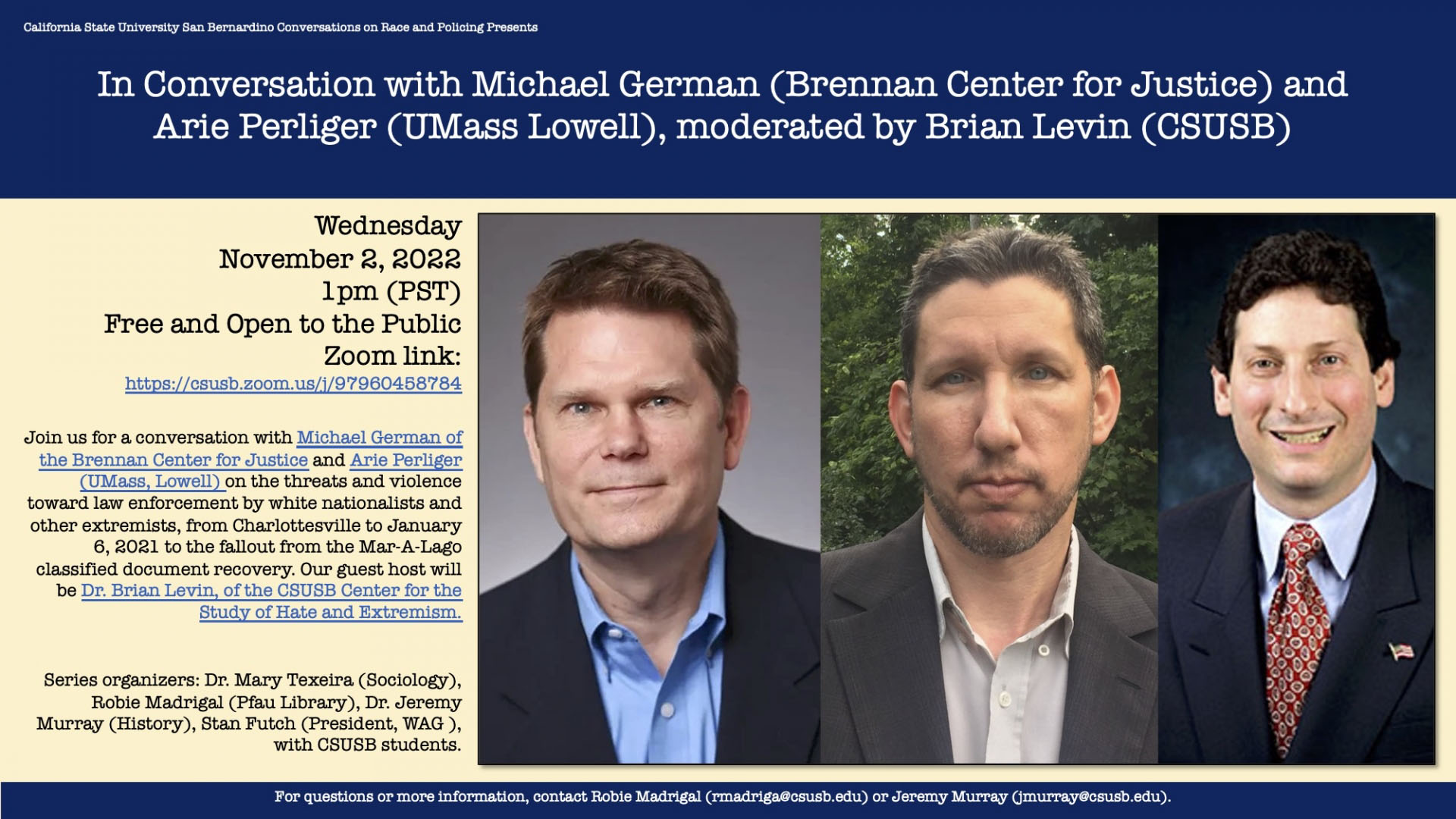