Rosalio Muñoz’s talk is part of this year’s theme for the LEAD Summit revisiting and commemorating social movements from the last 50 years, including the birth of Chicano-ethnic studies, the school walkouts/blowouts, bilingual education and the Chicano Moratorium.

Rosalio Muñoz, longtime Chicano activist, anti-war and anti-police brutality organizer, and the principal organizer of the 1970 Chicano Moratorium March against the Vietnam War, will be one of the featured speakers for the 2022 Latino Education & Advocacy Days (LEAD) Summit XI, set for Sept. 30 at Cal State San Bernardino.

Muñoz’s talk is part of this year’s theme for the LEAD Summit “Movimiento y Compromiso: 50 Years of Challenges, Possibilities, and the Quest for Educational Equity.” The summit programs will revisit and commemorate social movements from the last 50 years, including the birth of Chicano-ethnic studies, the school walkouts/blowouts, bilingual education and the Chicano Moratorium. 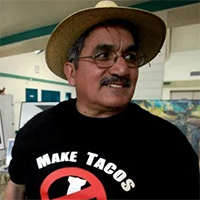 Each year the LEAD Summit, which is open to the public and free to attend, brings together teaching professionals and educators, researchers, academics, scholars, administrators, independent writers and artists, policy and program specialists, students, parents, civic leaders, activists and advocates – all sharing a common interest and commitment to education issues that impact Latinos to help them define the future.

Richard Anthony Marin, better known as Cheech Marin, has been named the honorary chair/padrino de honor for the 2022 LEAD Summit. Marin is probably best known as half of the comedic “irreverent, satirical, counter-culture no-holds-barred duo of Cheech and Chong,” as his website states. But he also is an actor, director, writer, musician, humanitarian and art collector. Marin is known as a strong advocate for Chicano art, and began developing his collection in the mid-1980s, which eventually led to the creation of “The Cheech Marin Center for Chicano Art, Culture & Industry” in the Riverside Art Museum, which Marin will talk about at 10 a.m.

At 1:25 p.m., Rev. Richard Estrada, Justice Now Minister at The Historic Church of the Epiphany, and former associate pastor of Our Lady Queen of Angels “La Placita” Church, will introduce Muñoz, whose talk will be “Social Justice at Home: the Chicano Moratorium and the Power of Protest.”

Muñoz will share his experiences as a Chicano student leader at UCLA and becoming the first Chicano student president at the university running on a progressive platform, supporting the United Farm Workers, disarming campus police, rent control in the apartment surrounding the UCLA campus and against the U.S. war in Vietnam, according to “The Chicano Generation: Testimonios of the Movement.”

On Aug. 29, 1970, Muñoz and fellow Chicano activist Ramses Noriega organized a peaceful march in East Los Angeles, where over 30,000 Mexican Americans were in attendance in the march, which became a site of police brutality after sheriffs attacked and tear gassed the crowd, leading to the deaths of three people, including Muñoz’s friend and Chicano and Los Angeles Times journalist Ruben Salazar.

“The Chicano Moratorium of 1970 holds many lessons for today. One is that youth have the ideas and passion to make extraordinary change, and our hope for Muñoz’s talk is to inspire a new generation of activists,” Murillo said.