The curtain rises on a light-hearted 2021-2022 theatre season

The curtain rises on a light-hearted 2021-2022 theatre season

The 2021-2022 Season of Light will have a little something for everyone: a romantic comedy written by a 17th century nun, a uniquely stylized puppet show, a modern adaptation of a Shakespearean comedy, and more.

After a not-so-brief yearlong intermission, the CSUSB Department of Theatre Arts is back and ready to dazzle its guests with a fun selection of entertaining plays designed as an escape from reality.

The 2021-2022 Season of Light will have a little something for everyone: a romantic comedy written by a 17th century nun, a uniquely stylized puppet show, a modern adaptation of a Shakespearean comedy, and a play described by its director as “Like ‘Weekend at Bernie’s,’ but a musical set in Monte Carlo!”

The season begins when the historical romantic comedy “House of Trials,” directed by assistant professor Kristi Papailler, opens on Nov. 12. Written well ahead of its time by one of the few female playwrights of the age, Sor Juana Ines de la Cruz, this 17th century romantic farce is a wild tale involving a brother and sister entangled in a web of love with four others. House of Trials will be on the Barnes Stage Nov. 12-21.

Professor Johanna Smith’s travelling puppet production, “The Teeny Tiny Puppet Show Festival,” sets down in the Black Box Theatre for one weekend only this December. The Teeny Tiny Puppet Show Festival is a collection of short stories written and created by puppetry students, all told in the Brazilian “Teatro Lambe Lambe” style. Each puppet story takes place inside a miniature set box with puppets and sets designed by the creator of each tale.

From April 22 to May 15, 2022, the theatre department will feature two productions running in repertory with one another. Both plays utilize the same stage, with minor set decoration changes between shows. The cast of one show operates as the crew of the second show and vice versa, creating a truly unique experience for both patrons and students.

Debuting April 22 is the musical comedy “Lucky Stiff,” book and lyrics by Lynn Ahrens with music by Stephen Flaherty. Directed by professor Kathryn Ervin, Lucky Stiff is a raucous, quirky murder mystery parody, complete with mistaken identities, 6 million in diamonds and a corpse in a wheelchair. Harry Witherspoon is a simple English shoe salesman that stands to inherit a fortune if he can pass his recently murdered uncle off as alive while on a vacation to Monte Carlo. If he succeeds, all of his troubles vanish; if he fails, the money goes to the Universal Dog Home of Brooklyn or his uncles’ gun-toting ex!

Opening April 23, is a modern adaptation of William Shakespeare’s comedy “The Two Gentlemen of Verona,” directed by professor Tom Provenzano. The Two Gentlemen of Verona is the story of Valentine who travels from Verona to experience the world, leaving his best friend Proteus behind. Proteus soon follows, leaving his betrothed Julia, who, disguised as a man named Sebastian, is not far behind! Valentine, Proteus and ‘Sebastian’ all find themselves in the court of the Duke of Milan, where both Valentine and Proteus attempt to court the Duke’s daughter Silvia. Broken hearts, romantic entanglements, mistaken identities and a gang of marauding outlaws round out the adventure.

Visit the theatre arts website for the complete schedule of the repertory shows Lucky Stiff and The Two Gentlemen of Verona.

Individual and season tickets can be purchased from the CSUSB Theatre Arts Box Office, or online at theatre.csusb.edu. Subscriptions range from $20 to $50, with individual tickets at $6 for students and children under 17; $12 for faculty, staff, senior citizens and military; $15 for adults.

Performances take place in the Ronald E. Barnes Theatre on the CSUSB campus. Parking at CSUSB is $6 Monday-Friday and $3 on the weekend.

All production dates and times are subject to change to coincide with any health and safety guidelines established by the CDC. Follow the theatre’s Facebook account for the most up-to-date information.

For additional information, please contact the Theatre Box Office at (909) 537-5884 or theatrearts@csusb.edu. 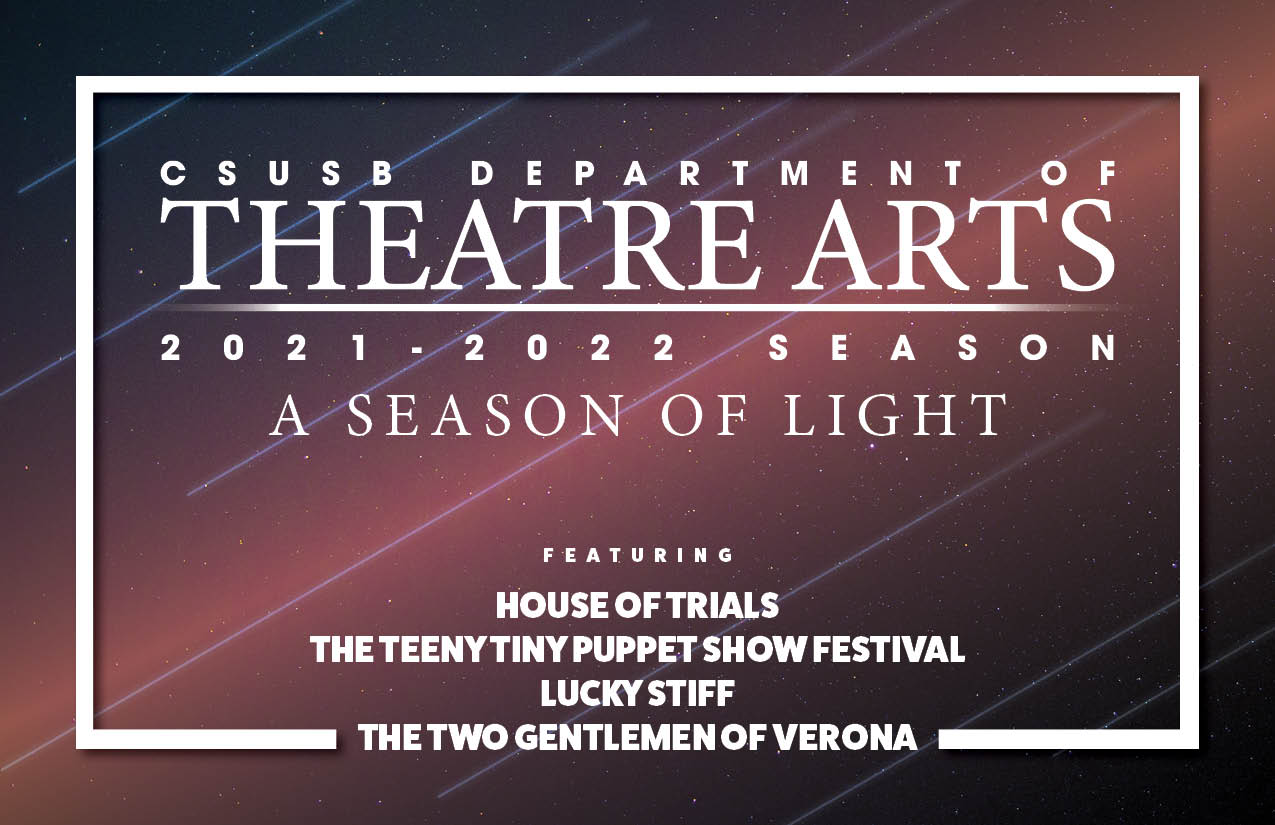 May 19, 2022 Faculty in the News, May 19
May 18, 2022 RAFFMA collaborates with elementary school to present smARTshow
May 19, 2022 Visiting professor explores soundscapes and compositional techniques in lecture and research masterclass
View All News