U.S. Supreme Court ruling on DACA topic of next Conversations on Race and Policing on Aug. 12

U.S. Supreme Court ruling on DACA topic of next Conversations on Race and Policing on Aug. 12

The U.S. Supreme Court’s ruling earlier this summer that prevented the Trump administration from immediately ending the Deferred Action for Childhood Arrivals (DACA) will be the focus of the program.

The U.S. Supreme Court’s ruling earlier this summer that prevented the Trump administration from immediately ending the Deferred Action for Childhood Arrivals (DACA) will be the focus when Cal State San Bernardino hosts the next Conversations on Race and Policing, 4 p.m. Wednesday, Aug. 12, on Zoom.

The program will include an overview of the U.S. high court’s June 18 decision upholding the program and what it means for California’s Dreamers. CSUSB DACA recipients, some of whom may choose to remain anonymous, will share their thoughts on the ruling.

The U.S. Supreme Court, on a 5-4 ruling, said its decision was procedural – the Trump administration did not provide “a reasoned explanation” for dismantling DACA, which stemmed from an executive action in 2012 by President Barack Obama. The decision neither upheld DACA nor abolished it, so the ruling is considered a temporary reprieve.

DACA allowed for “certain people who came to the United States as children and meet several guidelines may request consideration of deferred action for a period of two years, subject to renewal. They are also eligible for work authorization. Deferred action is a use of prosecutorial discretion to defer removal action against an individual for a certain period of time. Deferred action does not provide lawful status.”

Marisol Montejano, who graduated from CSUSB in June with a degree in math, told The New York Times upon learning of the court ruling, “‘I was so worried that I might not be able to use my degree, that I might get deported,’ said Ms. Montejano, 36, who enrolled in 2014 in DACA, which had been initiated two years earlier by President Barack Obama.” The newspaper quoted the mother of two U.S.-born children as saying, “I feel like I can breathe. I feel like I can tell my kids it’s going to be OK.”

The series will continue on Aug. 19, when the film, “Profiled: The Mothers of Murdered Black and Latino Youth,” will be shown, followed by a discussion. The documentary, winner of the 2018 Paul Robeson Award at the Newark Black Film Festival, tells the stories of mothers of black and Latin youth killed by the NYPD, powerfully illuminating racial profiling and police brutality within the context of white supremacy.

The ongoing Conversations on Race and Policing series, now in its 10th week, is hosted by CSUSB students Marlo Brooks, Kameron Pyant and Yvette Relles-Powell.

And, related to the university’s conversations series, Netflix is making the 2016 Ava DuVernay film, “13th,” available for free on its YouTube channel. Combining archival footage with testimony from activists and scholars, director Ava DuVernay’s examination of the U.S. prison system looks at how the country’s history of racial inequality drives the high rate of incarceration in America. 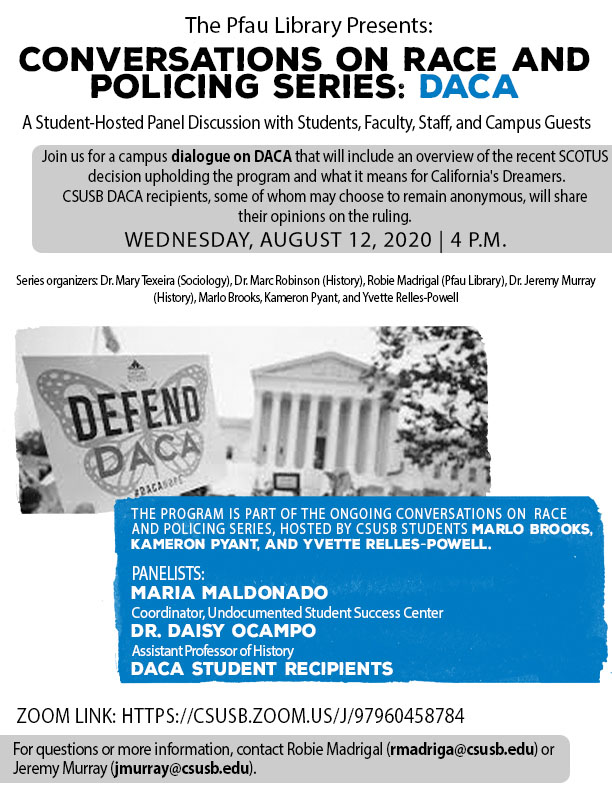