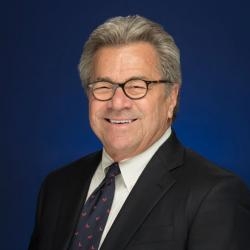 A native of Chicago, Illinois, Dr. Terry L. Rizzo earned his Ph.D. from University of Illinois, Urbana-Champaign, in Physical Education and Adapted Physical Education. His Master’s degree is from the University of Arizona, and bachelor’s degree is from Northeastern Illinois University. Dr. Rizzo served 21 years as Chair of California State University, San Bernardino (CSUSB) Department of Kinesiology. As a professor and Chair Dr. Rizzo has served on many university committees related to the administration and operation of the university, including the CSUSB Faculty Senate, Faculty Senate Executive Committee, Co-Chair of the CSUSB Strategic Planning Committee, and Chair of the Faculty Affairs Committee. In 2016 - 2017, he served as Interim Assistant Vice President and Dean of Undergraduate Studies at CSUSB and during the 2019-2020 academic year, he served as interim chair of the Department of Health Science and Human Ecology. Today, Dr. Rizzo is an Emeritus Professor of Kinesiology at CSUSB.

Dr. Rizzo has earned many professional awards and honors throughout the years for his scholarly endeavors. Some of his awards include the American Kinesiology Association (AKA) Distinguished Leadership Award for Undergraduate Education Institutions for Outstanding Administrative and Leadership Performance. Dr. Rizzo received Outstanding Professor Award (for excellence in teaching, research, and service) at CSUSB and Golden Apple Award for Excellence in Teaching at CSUSB; both are the most coveted awards for faculty members on campus. Those two awards earned him the prestige of induction to Phi Kappa Phi Honor Society, CSUSB. In addition, CSUSB honored him as a Founding Fellow of the Teaching Academy at the university. Dr. Rizzo’s scholarly activities earned him the Project Inspiration Award, from the National Association for Sport and Physical Education (NASPE) and recently the Honor Award from CAHPERD for Outstanding Service to the discipline and profession of Kinesiology, Over the years, Dr. Rizzo received many awards for his research endeavors including the G. Lawrence Rarrick Research Award from the National Consortium for Physical Education for Individuals with Disabilities. He received the Young Scholar Award from the Western Society for Kinesiology and Wellness and was a recipient of the Meritorious Performance and Professional Promise Award, School of Natural Sciences, CSUSB. Dr. Rizzo earned Fellow status to the Research Consortium of the Society of Health and Physical Educators (formerly AAHPERD). His scholarly activities included a role as Faculty Mentor for three McNair Scholars at CSUSB. Likewise, his students recognized his scholarly contributions by bestowing him with awards like the Faculty Appreciation Award, Student Athletes in the Department of Athletics, and the Dr. Fred Keller’s Award for Outstanding Faculty Advocacy for Students with Disabilities, at CSUSB.

However, Dr. Rizzo is most proud of serving as a Faculty Mentor to student leaders and graduates of the “McNair Scholars Program,” at CSUSB. The program prepares students from under-represented groups for advanced academic preparation. His mentees are now professors with their doctorate degrees. They are Dr. Kendrick Davis, Dr. Manuel Silva, and Dr. David Tobar.

Dr. Rizzo is also proud of developing the “Physical Educators’ Intention toward Teaching Individuals with Disabilities (PEITID)’ and the Principals’ Attitude toward Promoting Physical Education (PAPE)” surveys. People interested in assessing beliefs, attitudes, or intentions about teaching students with disabilities in physical activity contexts, often use the PEITID. One of his recent research endeavors was a project sponsored by the California Endowment. Using the Theory of Planned Behavior” Dr. Rizzo assessed the intentions of public-school principals toward promoting physical education programs in public schools. Recently, he made two national presentations to sharing the results of the research with professionals. The research resulted in a manuscript published in November 2019. In addition, Dr. Rizzo and Dr. Luis Columna published a chapter about using the Theory of Planned Behavior for use in assessing beliefs, attitudes, to predict intention and behaviors toward individuals with disabilities. The chapter recently (2020) appeared in the Routledge Handbook of Adapted Physical Education. Dr. Rizzo recently (2021) collaborated with Drs. Scott McNamara and Matt Townsley publishing results from research in a paper measuring School Administrators’ Intentions to Promote Adapted Physical Education. Presently, he is collaborating with colleagues in Portugal and Australia in developing surveys to assess beliefs, attitudes, and intentions toward teaching individuals with disabling conditions.

Dr. Rizzo’s professional mission and goal is to use his passion and commitment to promote programs associated with health, physical activity, recreation, and dance for people, especially individuals with disabilities. He promotes professional growth and research dedicated to advancing the body of knowledge in Kinesiology. Dr. Rizzo uses leadership skills to foster and support relationships among professional, public and government organizations, to improve health, physical activity, recreation, dance, and other movement-related activities for people across the life span.