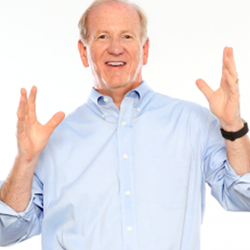 Dr. Mike Stull is the Director of the Inland Empire Center for Entrepreneurship (IECE) at California State University, San Bernardino (CSUSB).  He also serves as Chair for the Department of Management in the Jack H. Brown College of Business and Public Administration and academic director for entrepreneurship.

With more than 30 years as an entrepreneur in for-profit, non-profit, and public sector environments, Mike describes himself as the “living example” that entrepreneurship is a process that can be applied in any setting and he truly “thinks like an owner.” As someone who likes to challenge his students in and out of the classroom, Mike is viewed as an innovative and demanding teacher that brings the reality of entrepreneurship into the classroom. As one of his students noted “the class projects that Mike assigns, such as having to start and run a business, touch on every aspect of what it takes to be an entrepreneur. It truly is learning applied to the reality of entrepreneurship.” Due to this “hands-on” and entrepreneurial approach, Mike has been recognized with several teaching awards in the Jack H. Brown College, was considered for the CSU system’s highest honor for faculty, the Wang Family Excellence Award, and was the recipient of the Entrepreneur of the Year (EOY) award from Ernst & Young.

Mike developed nine (9) of the current entrepreneurship courses taught at the undergrad and grad programs in Entrepreneurship.  He currently teaches: