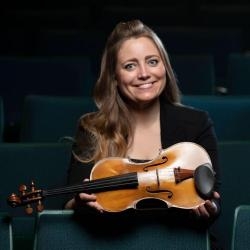 Dr. Lucy Lewis enjoys an active career as a soloist, chamber musician, orchestral performer, and teaching clinician, and has appeared in these roles throughout the United States, Canada, South America, Europe, and Africa. Just having received early tenure and promotion at California State University San Bernardino, Dr. Lewis is Associate Professor of Orchestral Music Education, and coordinates the string area, directs the orchestral studies program, facilitates the string chamber music program, and teaches applied violin and viola, string methods, and string pedagogy, and maintains a small private studio. Previously, Dr. Lewis served as the director of the Loma Linda Academy String Program, and has also been on the faculties of the Preucil School of Music, the University of Cincinnati College-Conservatory Preparatory Department, Southwestern and Lake Michigan Colleges, the Citadel Dance & Music Center, and the Fischoff Chamber Music Association’s Mentor Program.  She has also been a guest clinician and performer at several music festivals including the Los Angeles Suzuki Institute, the Advanced Suzuki Institute at Stanford University, and the “At First Sight” Chamber Music Sight-Reading Workshop in Tennessee.

During her time as Music Director and Conductor of the Orchestral Studies Program at California State University, San Bernardino, the program has more than doubled in size.  Dr. Lewis’s innovative season programming has featured the CSUSB Opera Theatre Program, Concert Choir & Chamber Singers, Vocal Jazz Program, and Brass Ensemble, in addition to multiple guest artists.  An avid supporter of the development of young musicians, Dr. Lewis founded the CSUSB Young Artist Competition that provides finalists with the opportunity to perform as featured young artists with the orchestra.  She also annually commissions new works by the faculty and students of the CSUSB Composition Program, which are performed by the orchestra every spring.  Dr. Lewis is frequently engaged as an orchestral clinician and has guest conducted orchestras in California, Michigan, Tennessee, Florida, Maine, and Colorado.  On tour, she has led orchestras to perform in Hawaii and Florida, and on September 30, 2019, the CSUSB Orchestra traveled to South Korea upon the invitation of Dr. Se-Ung Lee, honorary chairman of the Shin-Il Cultural Foundation Board of Directors, and the administration of Seoul Cyber University.  This trip was the culmination of months of collaboration between the Shin-Il Cultural Foundation, Seoul Cyber University, and California State University, San Bernardino, and was made possible through an endowment and a grant worth $498,000 created by the Korea Foundation.  The highlight of this trip was the remarkable opportunity to perform in the Seoul Arts Center IBK Chamber Hall on Tuesday, October 2.  This concert was curated to celebrate the growing relationship between CSUSB and Seoul Cyber University and repertoire spanned the gamut from works by Hispanic composers, to Korean art songs, to works from the heart of the canon of Western classical music.  It was an honor to feature Seoul Cyber University faculty soprano Minhyung Kim and tenor Dong Man Kim, and the night ended with a standing ovation.  The CSUSB Orchestra's tour to Korea was covered by the CSUSB Magazine, the CSUniverse, and the Korea Times.  CSUSB also produced a documentary film, the first of it's kind for the university, covering this experience, entitled "Flight to Harmony." Dr. Lewis is also the director of the CSUSB Orchestra, Piano, and Chamber Music Summer Camp, and serves as a clinician and adjudicator for the San Bernardino County Music Educators Association, California American String Teachers Association, and Forum Music Festivals.

Dr. Lewis is also a devoted chamber musician, interdisciplinary collaborator, and community engagement specialist. A former member of the Ardore String Quartet, Dr. Lewis was an avid participant in the University of Iowa String Quartet Residency Program (UISQRP), and in May of 2013, through the sponsorship of Arts Share at the University of Iowa and a Better Future for Iowans grant through the University of Iowa Office of the Provost, the quartet toured Iowa with Elizabeth Oakes (former member of the Maia String Quartet and UISQRP director), as guest artist. The tour combined educational outreach programs for audiences of 200+ elementary-aged school children and performances in restored opera houses in rural communities. In the 2013-2014 season, Dr. Lewis organized the personnel and performances for the entire set of Bach’s Brandenburg Concerti at the University of Iowa. The purpose of this project was to perform this wonderful repertoire, but also to provide an opportunity for the University of Iowa School of Music students to use their talents to give back to the global community; as such, this project partnered with the American Red Cross to raise money for the relief efforts in the Philippines through it’s December 2013 concert, and it partnered with the Johnson County Food Bank in May of 2014 to raise donations for community members in need through the final concert of this series.  Currently, Dr. Lewis performs as a member of the CSUSB Faculty Piano Trio with Mi-Hyeon Chu, cellist, and Dr. Wen-Ting Huang, pianist, and is a chamber music coach for the Inland Empire Chapter of the Junior Chamber Music (JCM) Program.

Dr. Lewis is a dedicated pedagogue and has a special place in her heart for researching, exploring, and developing the symbiotic relationship between performance and pedagogy. This unique interest has led her to pursue a variety of projects, and she firmly believes that performing artists in the twenty-first century should also have the high-level skills to be artist-educators. Subsequently, her doctoral thesis at the University of Iowa was based on pioneering research that focused on developing an innovative model for re-designing collegiate performance degree program curricula, such that pedagogy and performance may be taught holistically.  Dr. Lewis’s pedagogical training encompasses extensive Suzuki teacher training with Moshe Neumann, Ed Sprunger, Ed Kreitman, Ann Montzka-Smelser, Nancy Lokken, Alice Joy Lewis, Susan Kempter, Carol Dallinger, Christie Felsing, Mark Bjork, William Preucil Sr. and Julia Hardie, string pedagogy studies with Susan Keen, Carla Trynchuk, Lynelle Smith, Roberta Guaspari, and Kurt Sassmannshaus, training for the Mark O’Connor American String Method, and participation in the Starling-DeLay Symposium on Violin Studies at the Juilliard School.  Dr. Lewis has authored several articles for the Suzuki Association of the Americas Journal, and upon invitation, Dr. Lewis has presented multiple times at the Iowa Music Educators Conference, the California All-State Music Educators Conference, the National Association for Music Education National Conference, the American String Teachers Association National Conference, the Suzuki Association of the Americas National Conference, the Chamber Music of America National Conference, and the Hawaii University International Conference for Arts, Humanities, Social Sciences & Education.

Recognized for her research and contribution to her field, Dr. Lewis has been awarded numerous grants including the CSUSB Office of Student Research Faculty and Student Grant, the CSUSB Inland Empire Center for Entrepreneurship Faculty Fellowship, a Stater Bros. Inc. Grant, and a grant from the National String Project Consortium that also designated California State University San Bernardino as a new National String Project Consortium site (one of only forty in the entire United States).