“Brown Church: Five Centuries of Latina/o Social Justice and Identity,” is both the title of Romero’s talk and his latest book, which will be discussed at noon Thursday, Oct. 15, on Zoom. The program can be accessed from a PC, Mac, Linux, iOS or Android at https://csusb.zoom.us/j/388207496.

Romero’s presentation will explore “a third historical perspective – that of the Brown Church. Over the past five centuries, Brown Church leaders such as Sor Juana Inés de la Cruz, Bartolomé de las Casas, César Chávez, Dolores Huerta, and others have risen up to challenge the most horrific injustices of their day,” the abstract of the talk states. “They have fought such great evils as the Spanish Conquest and Spanish colonialism, the ‘sistema de castas,’ Manifest Destiny and U.S. settler colonialism in the Southwest, Latin American dictatorships, U.S. imperialism in Central America, the oppression of farmworkers, and the current exploitation and marginalization of undocumented immigrants. In every instance of racial and social injustice in Latin America and the United States over the centuries, Latino Christians— both Catholic and Protestant—have arisen to challenge the religious, socio-economic, and political status quo. Collectively, they may be called the ‘Brown Church.’”

Romero is an associate professor in the departments of Chicana/o Studies and Central America Studies, and Asian American Studies at UCLA. He received his Ph.D. from UCLA in Latin American history and his Juris Doctor from U.C. Berkeley, and is also an attorney. In addition to “Brown Church,” he has also written “The Chinese in Mexico, 1882-1940,” “Jesus for Revolutionaries: An Introduction to Race, Social Justice, and Christianity,” and “Mixed Race Student Politics.”

“The Chinese in Mexico” received the Latina/o Studies book award from the Latin American Studies Association and “Brown Church” was written with the support of a Louisville Institute Sabbatical Grant for Researchers. Romero is also an ordained minister and faith rooted community organizer.

This program is supported by the CSUSB Department of History, the History Club and Phi Alpha Theta Chapter. 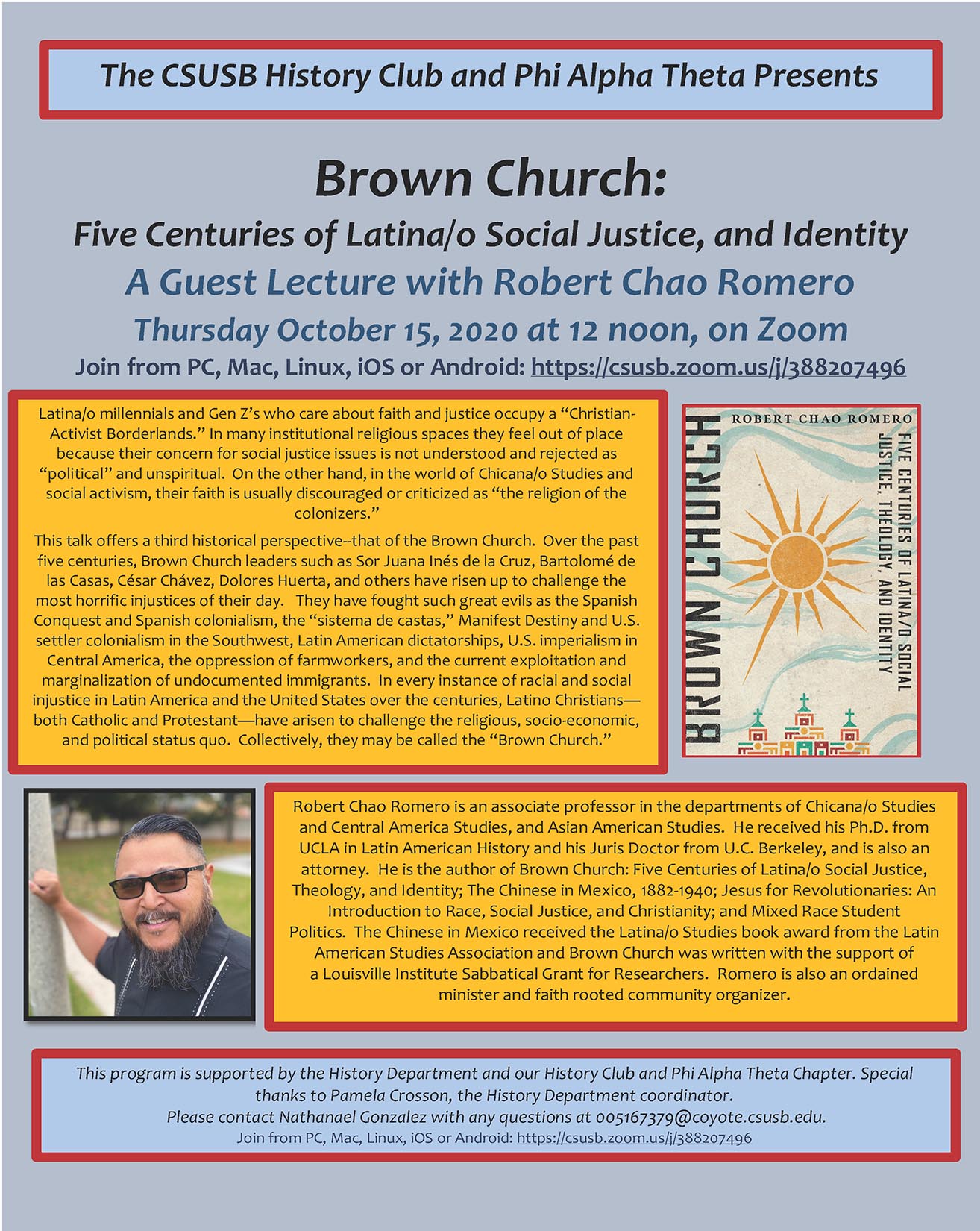 September 17, 2021 CSUSB assistant professor and students to launch virtual exhibit of Sherman Indian Boarding School
September 14, 2021 Faculty in the News, Sept. 14
September 10, 2021 Conversations on Race and Policing Roundtable on ‘Policing, the Pandemic and the Return to Campus: Students Weigh-in’
View All News