Mathematics professor honored for her contributions to the field

Mathematics professor honored for her contributions to the field

CSUSB mathematics professor Shawn McMurran was recently named the recipient of a Mathematical Association of America Certificate of Meritorious Service.

Shawn McMurran, a professor in the College of Natural Sciences Department of Mathematics, was recently named the recipient of a Mathematical Association of America (MAA) Certificate of Meritorious Service for the Southern California-Nevada Section. This service award recognizes recipients’ contributions to the field of mathematics and the association, according to an MAA news release.

Receiving the award “was quite an honor and a surprise,” McMurran said.

“Working with the MAA, both within my section and nationally, has always been a pleasure,” she said. “I’m grateful to all who have welcomed me into the MAA fold and provided friendship and collegiality throughout these many years. This Certificate of Meritorious Service is really a testament to the team effort put forth by all of us.”

McMurran along with other award recipients were recognized in an “MAA Summer 2020 AwardWinners” video (McMurran shown at the 3:40 timestamp).

Madeleine Jetter, the chair of the department, described McMurran’s work as “truly exemplary.”

“The MAA is a special organization to many of us in the mathematical community because of its focus on making math accessible to undergraduate students,” she said. “Dr. McMurran’s long history with the MAA includes contributions as a program chair, as an editorial board member, and as a leader for the Southern California-Nevada section, so she well deserves this recognition. Her work has been truly exemplary in every area of our profession – teaching, research, and service – so we in the Department of Mathematics at CSUSB are thrilled to see her receive this award.” 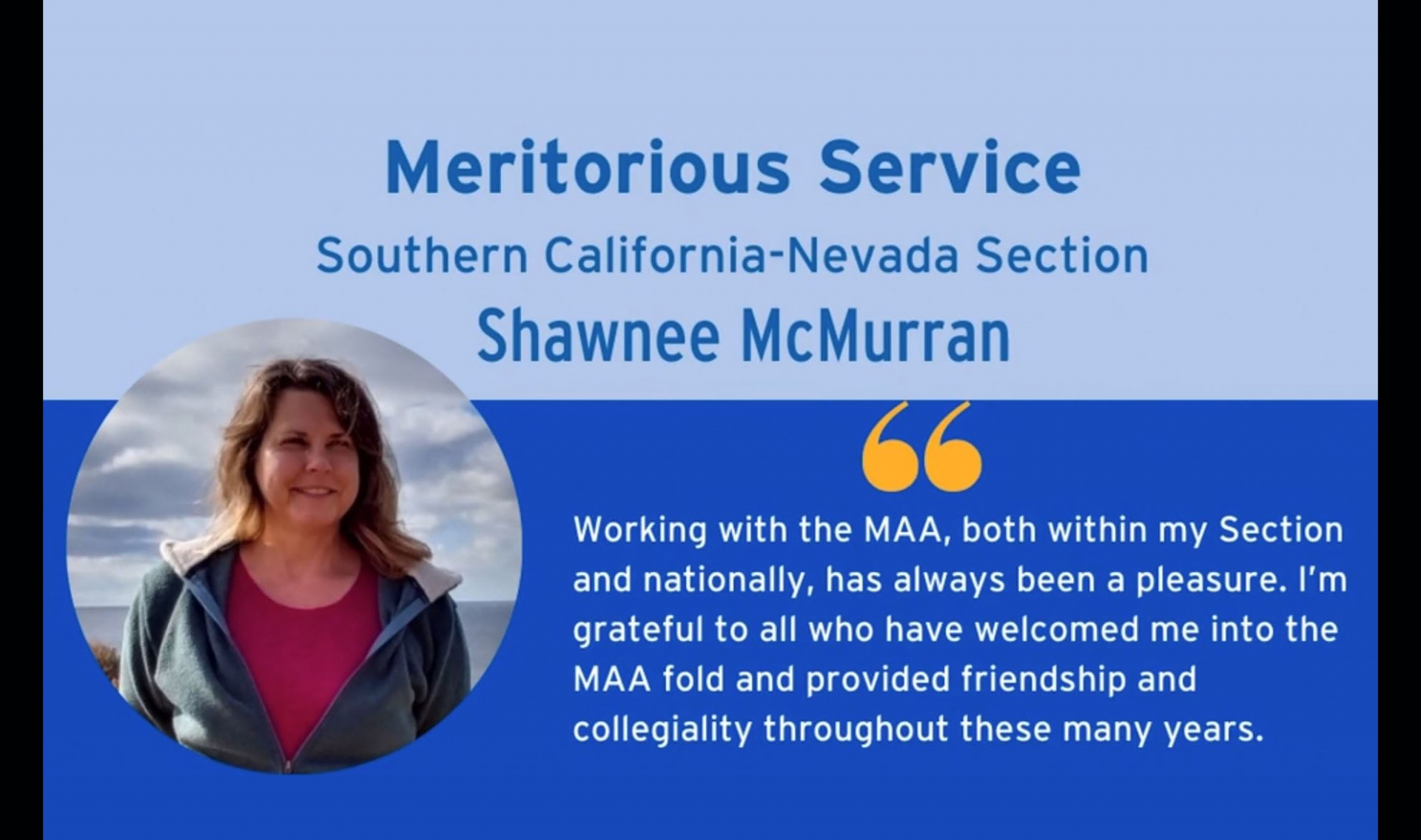 McMurran’s achievements and service have previously been recognized.

Additionally, McMurran served as chair of the Department of Mathematics from 2018 to 2019. She also served on the university’s Graduation Initiative 2025 Progressive Pedagogy Subcommittee. McMurran has mentored students who went on to pursue doctoral degrees at prestigious universities, and also students who competed in the state-wide CSUSB Student Research Competition.

“Shawn brings a tremendous amount of skill, enthusiasm, and deep knowledge to our mathematics students,” said Sastry G. Pantula, dean of the College of Natural Sciences. “Her commitment to student success is only equaled by her commitment to the field of mathematics, math education, and mathematics scholars across the country. This award recognizes just a few examples of how Shawn demonstrates her excellence in teaching, research, and service.”

“The individuals we honor represent the spirit of community that is at the heart of MAA,” said Michael Pearson, executive director of MAA. “Their willingness to give of their time, energy, and expertise to benefit their Sections and beyond serves as a fresh reminder of why the MAA remains so close to my heart.”

In McMurran’s nomination, the MAA described her contributions as “extensive and praiseworthy,” citing her 15-year service to the MAA Southern California-Nevada Section’s governing board, including her role as treasurer. Other contributions cited include her role in facilitating sixth- and seventh-grade lesson studies with the National Science Foundation’s Mathematics and Science Partnership’s Algebraic Concepts for Elementary Students program and professional development seminars for fourth- through eighth-grade teachers. McMurran has also served as a faculty advisor for the Inland Counties Mathematics Project since 2006.

McMurran’s “scholarship also serves the mathematical community by raising awareness of and bringing new insights to the work of Mary Cartwright, John Littlewood, and women who pursued and influenced higher education during the late nineteenth century,” according to the MAA Awards and Prizes program.

The Mathematical Association of America is the world’s largest community of mathematicians, students, and enthusiasts, according to its website.

For more information about the university’s mathematics degree programs, visit the Department of Mathematics homepage.