Zachary Powell (criminal justice), Marc Robinson (history) and Rafik Mohamed (dean, College of Social and Behavioral Sciences) were interviewed for a three-part series on the history of policing Black communities. Links to each segment are below.

There’s been recent pushback from the black community demanding justice when it comes to police brutality.

Rafik Mohamed, dean of the CSUSB College of Social and Behavioral Sciences, Zachary Powell, assistant professor of criminal justice, and Marc Robinson, assistant professor of history, were interviewed for the newscast’s multi-part series that looks back at history to see how the events of the past have shaped our modern-day police force.

They have been studying police tactics for many years and believe what we see today is merely an extension of the law enforcement we saw when this country was founded. 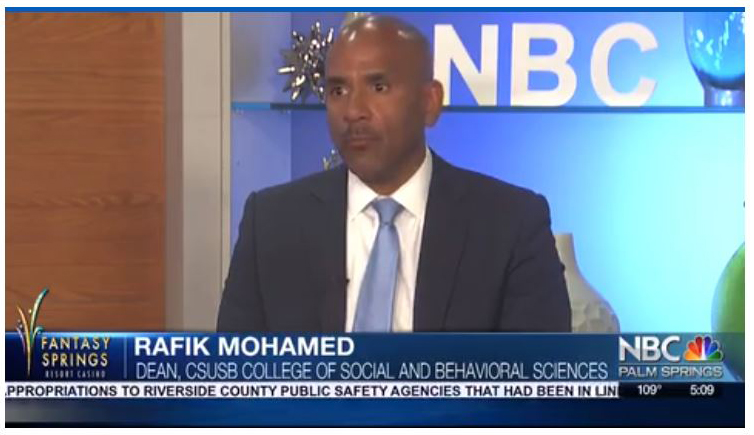 “If you go back historically, the presence of kind of race bias in policing used to be even more overt and even more pronounced,” said Mohamed.

“I think it would be a mistake to think there was like a good ‘ol days’ of policing where we used to be more community policing and then we moved away from that to being more of control.” he said. “When you think about when you created police departments, you think about, a lot of times these were political positions where people would pay someone who knew someone at a higher place. It was an attractive job because you had a salary, you had easy work to do and there was next to nothing in terms of training.”

See the complete segment at “Policing in the Black communities: The beginning.”

Part one of the NBC Palm Springs multi-part series focused on the history of slavery in America and how the black community was treated by police from the beginning. In part two, reporter Daytona Everett and a panel of experts from Cal State San Bernardino dive deeper into the rise of the Ku Klux Klan and the growing political influence on law enforcement in the mid-1900s. 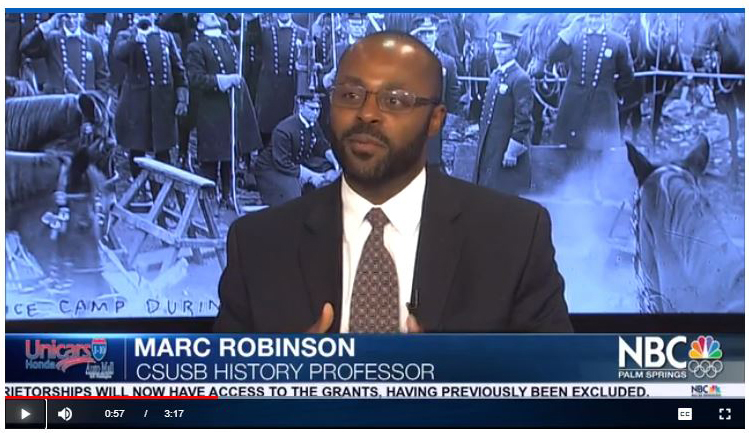 “If we defined racism as the notion that certain groups are inferior, well then there’s a connection between seeing a particular group say, African Americans, as inferior, more irresponsible, more prone to immoral behavior, more unintelligent, lazy, etcetera,” CSUSB history Professor Marc Robinson said. “Those kinds of inferior qualities then overlap with notions of criminality and notions of a population that demand more aggressive kind of policing.”

“Would you say that the racism in the past is better or worse than what we see in policing today?” NBC Palm Springs asked the experts from Cal State San Bernardino’s College of Social and Behavioral Sciences.

“Their emphasis on the behaviors, generally concentrated on communities and communities of color has validated pre-existing notions that people have about these communities,” Rafik Mohamed, dean of the college said.

Part one of the NBC Palm Springs multi-part series focused on the history of slavery in America and how the black community was treated by police from the beginning. In part two, reporter Daytona Everett and a panel of experts from Cal State San Bernardino examined the rise of the Ku Klux Klan and the growing political influence on law enforcement in the mid-1900s. In part 3, the final installment, they discussed the fight to uphold segregation through politics, and how that affected law enforcement practices.

“If you look at the war on drugs over the 1980s and the 1990s and in to the early 2000s, if you look at drug arrest data, you would presume that drug use was heavily concentrated in communities of color,” Rafik Mohamed, Dean of CSUSB’s College of Social and Behavioral Sciences, said. “If you look at drug use data from other sources, you see that it’s fairly evenly distributed across the population.”

Over the past four decades, the U.S. has committed more than $1 trillion to the war on drugs but prioritizing police really took a turn after the 9/11 attacks on the World Trade Center. 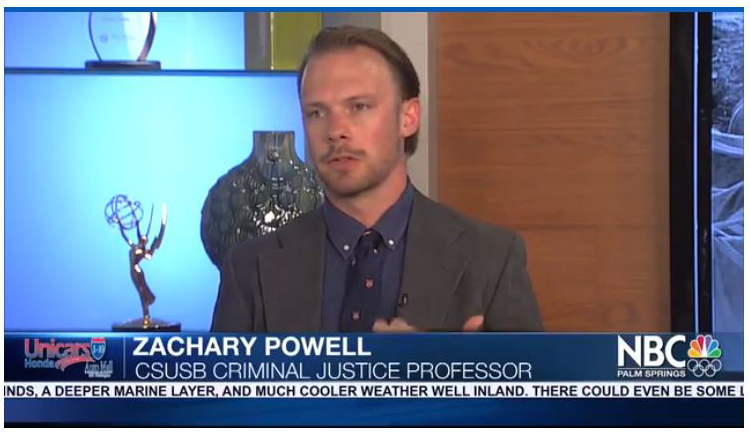 To this day, even local law enforcement is equipped with high-grade military gear.

“A police officer has unique power that we don’t,” Powell said.