More than 200 people ran or walked in the second annual Run Like A Mother 5K at Cal State San Bernardino on Saturday, Oct. 21, which this year was held in memory of slain student Jordyn Rivera. 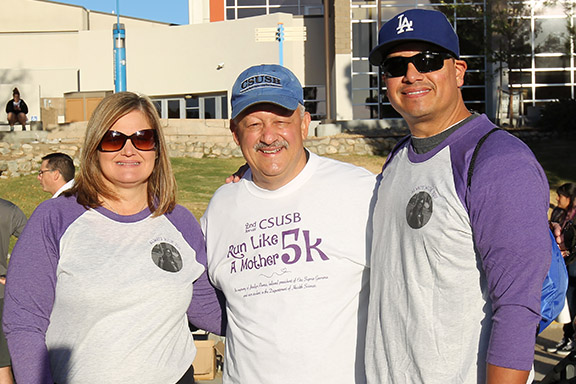 More than 200 people ran or walked in the second annual Run Like A Mother 5K at Cal State San Bernardino on Saturday, Oct. 21, which this year was held in memory of slain student Jordyn Rivera.

The race/walk was hosted by the CSUSB chapter of Eta Sigma Gamma National Health Education Honorary Society, of which Rivera had served as president and treasurer, and students of Health Science 404: Women’s Health, said chapter faculty adviser Angie Denisse Verissimo, who works alongside Nicole Henley, who serves as the other faculty co-adviser. Both are assistant professors in the university’s Department of Health Sciences and Human Ecology and faculty coordinators of the 5K.

Rivera, who was heavily involved in planning the race, was among those whose lives were lost in the mass shooting in Las Vegas on Oct. 1. The students, who were still mourning the loss of Rivera, decided to continue with the event as planned and dedicate it to her, Henley said.

“They should be praised for their efforts,” said Henley, who credited the students for their hard work and dedication in planning and staging the event.

Rivera’s parents, Mary and Albert Rivera, were also at the race, along with CSUSB President Tomás D. Morales. Time for Change Foundation’s executive director Kim Carter was also present along with her staff and nearly 40 women and children who receive services from their organization.

The 5K run/walk is to raise money and awareness for the Time for Change Foundation and Soul Food for Your Baby. Both are nonprofit community organizations dedicated to improving the lives of women and children by providing resources, programs and services.

The annual race is “public health in action,” said Verissimo. “It is a prime example of bringing community members and our CSUSB community together all while raising consciousness on the pressing concerns that our communities face and celebrating those community organizations that strive to address these concerns.”

For more information on Cal State San Bernardino, contact the university’s Office of Strategic Communication at (909) 537-5007 and visit news.csusb.edu.