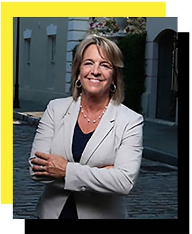 Kristin Graziano is South Carolina's first female Sheriff in the state's history. In her 20 years in law enforcement, she has recognized that the Sheriff's Office's role in racial profiling has destroyed the relationship between the community and the police.

In becoming Sheriff of Charleston County, Graziano has moved to end her department's relationship with immigration enforcement, dismantle racist policing, and restore trust within her community in her first days in office.

Graziano has dedicated her career to making the Sheriff's Office more accountable and responsive to the community.