“Policing Black Bodies: How Black Lives Are Surveilled and How to Work for Change,” is the focus of the next program in CSUSB’s ongoing series, Conversations on Race and Policing, set for 1 p.m. Tuesday, Oct. 26, on Zoom.

The authors of “Policing Black Bodies: How Black Lives Are Surveilled and How to Work for Change,” will be the featured speakers at Cal State San Bernardino’s next Conversations on Race and Policing, set for Tuesday, Oct. 26.

Angela J. Hattery, a University of Delaware professor of women and gender studies, and Earl Smith, emeritus professor of American ethnic studies and sociology at Wake Forest University, will share their insights in the context of race and policing virtually through Zoom beginning at 1 p.m.

The program, which takes its title from the book written by Hattery and Smith, is open to the public and can be accessed from a PC, Mac, Linux, iOS or Android at https://csusb.zoom.us/j/97960458784.

“From Trayvon Martin to Freddie Gray, the stories of police violence against Black people are too often in the news,” according to the book’s website. “In ‘Policing Black Bodies’ Angela J. Hattery and Earl Smith make a compelling case that the policing of Black bodies goes far beyond these individual stories of brutality. They connect the regulation of African American people in many settings, including the public education system and the criminal justice system, into a powerful narrative about the myriad ways Black bodies are policed.”

The book, published in 2017, also “goes beyond chronicling isolated incidents of injustice to look at the broader systems of inequality in our society – how they’re structured, how they harm Black people, and how we can work for positive change.”

Hattery, in addition to teaching courses on race and gender inequality, families and methods, is the co-director of the Center for the Study & Prevention of Gender-Based Violence at the University of Delaware. She is the author of 11 books, including her most recent book, co-authored with Smith and published in 2020, “Gender, Power and Violence: Responding to Intimate Partner Violence in Society Today.”

In addition to teaching at Wake Forest, Smith is currently an adjunct faculty member at George Mason University, teaching classes in sociology, African and American studies, and women and gender studies. Including “Policing Black Bodies,” he is the author of 11 books. His book, “Race, Sport and the American Dream,” which won the North American Society for the Sociology of Sport Best Book Award in 2008, has been published in three editions and is considered the only book on the market that examines structural racism in sports.

Hattery and Smith have also collaborated on the forthcoming book, “Way Down in the Hole: Race, Intimacy and the Reproduction of Racial Ideologies in Solitary Confinement,” which explores the ways in which racial antagonisms are exacerbated by the particular structures of solitary confinement.

More on their work can be found at their website, Smith & Hattery.

The next scheduled Conversations on Race and Policing will be on Tuesday, Nov. 2, at 1 p.m., with Dr. Joseph Darda (Texas Christian University) presenting “The Whiteness of Blue Lives: Race in American Policing.” 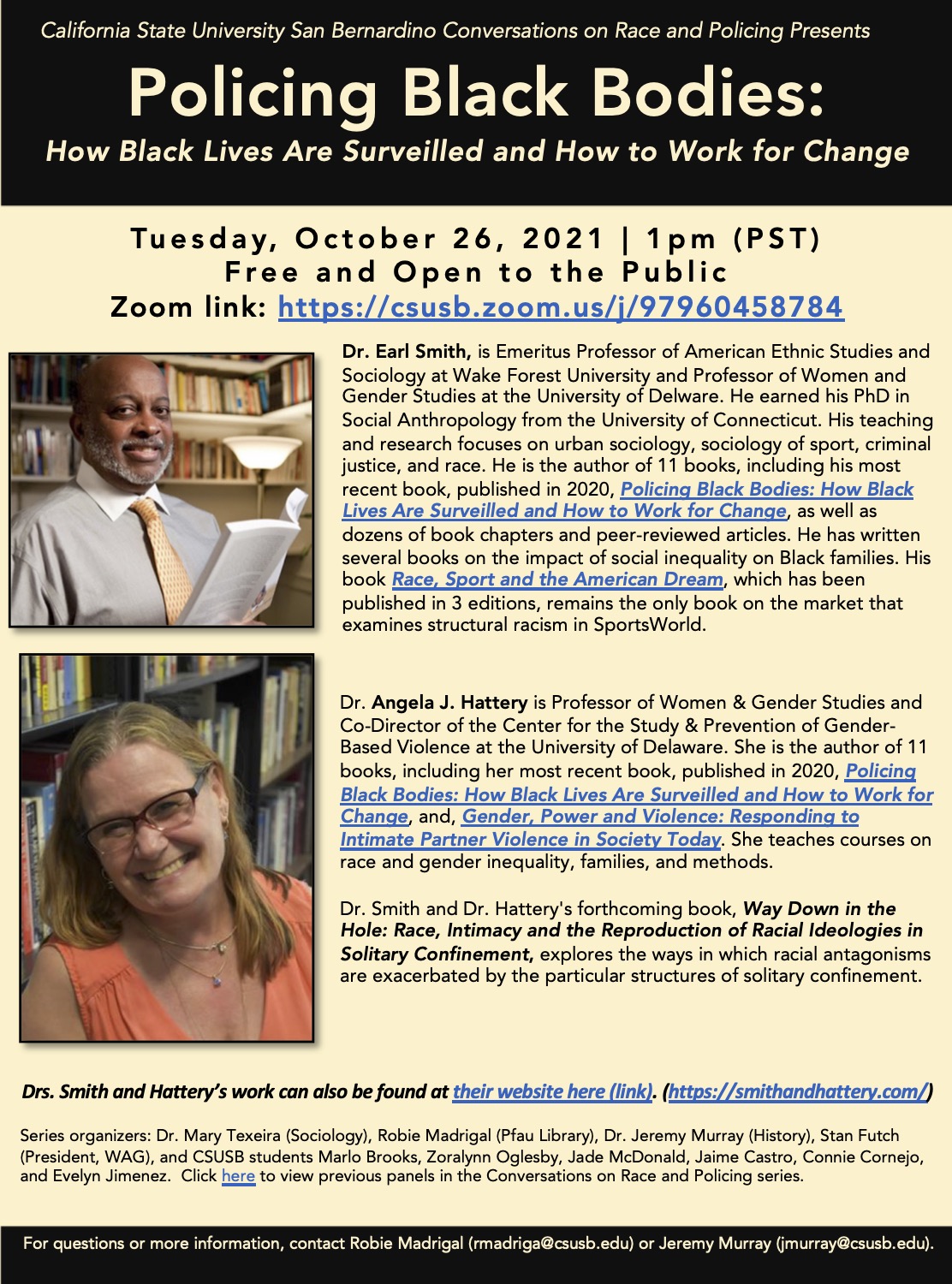