Documentary, ‘Pride Denied,’ focus of next Conversations on Race and Policing on May 12

Documentary, ‘Pride Denied,’ focus of next Conversations on Race and Policing on May 12

A screening and discussion of the film “Pride Denied: Homonationalism and the Future of Queer Politics,” will be the focus of the next Conversations on Race and Policing, 3 p.m. Wednesday, May 12, on Zoom.

A documentary film that examines how corporate sponsors “co-opted the concept of LGBTQ pride, turning it into a feel-good brand and blunting its radical political edge” will be the focus of the next Conversations on Race and Policing at Cal State San Bernardino.

“Pride Denied: Homonationalism and the Future of Queer Politics” will be presented beginning at 3 p.m. Wednesday, May 12, on Zoom. The program can be accessed from a PC, Mac, Linux, iOS or Android at https://csusb.zoom.us/j/97960458784.

Following the film will be a discussion with panelists Angela Asbell, who teaches courses in gender and sexuality studies at CSUSB; Jacob Chacko, who serves as associate director of Diversity and Inclusion for the San Manuel Student Union; and CSUSB student Eloy Garcia, who is president of The Pride Pack.

According to the film's website, “Many North American LGBTQ pride events initially emerged out of sites of revolt and resistance — such as the anti-police riots at the Stonewall Inn in NYC in 1969 and the protests that began after police bathhouse raids in Toronto 1981. Today, however, PRIDE™ is big business. Non-profits formed for the purpose of hosting pride events in cities such as Toronto, San Francisco, and New York sport multinational corporations as sponsors alongside multi-million dollar budgets. But where and how is this money spent? And to what ends? In ‘Pride Denied,’ Toronto activists and artists call for a return to prioritizing political activism and community support that characterized the emergence of the contemporary LGBT rights movement more than 40 years ago.”

Conversations on Race and Policing began in the aftermath of the May 25 death of George Floyd while in the custody of four Minneapolis, Minn., police officers. A video of the incident posted on social media has led to widespread protests, the firing of four police officers, the arrest and conviction of one officer on a second-degree murder and related charges, the other three on charges of aiding and abetting second-degree murder – and a spotlight worldwide on race and policing.

For more information, contact Robie Madrigal at rmadriga@csusb.edu or Jeremy Murray at jmurray@csusb.edu 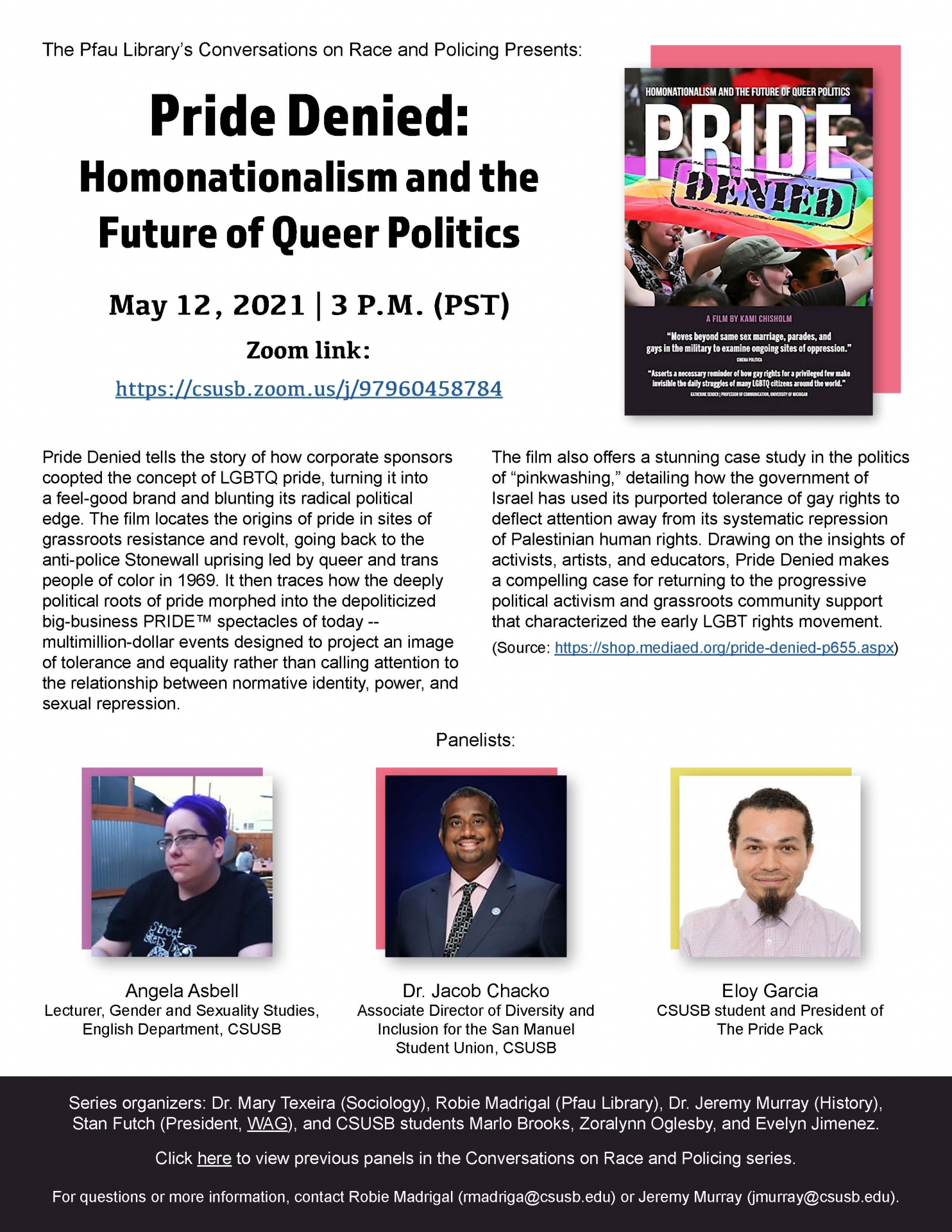 May 28, 2021 Faculty in the News, May 28
May 24, 2021 Program to reflect on the year since the death of George Floyd
May 14, 2021 South Carolina sheriff to detail how she is working to regain the community’s trust with her department
View All News