Ambassador Ronald E. Neumann, president of the American Academy of Diplomacy, will be the guest speaker at a Dec. 10 program hosted on Zoom by the World Affairs Council of Inland Southern California. CSUSB is a primary sponsor of the council.

As 2021 approaches and a new administration prepares to ascend to power in Washington, D.C., the foreign policy challenges facing President-elect Joe Biden will be the focus of a program presented by the World Affairs Council of Inland Southern California.

Ambassador Ronald E. Neumann, president of the American Academy of Diplomacy, will speak on “Foreign Policy Changes After January” at noon on Thursday, Dec. 10, on Zoom. Advance registration is required and can be done online at the event website.

Cal State San Bernardino is a primary sponsor of the council; Rafik Mohamed, dean of the university’s College of Social and Behavioral Sciences, sits on the council’s board.

Formerly a deputy assistant secretary of State, Neumann served three times as ambassador to Algeria, Bahrain and finally to Afghanistan from July 2005 to April 2007. Before Afghanistan, Neumann, a career member of the Senior Foreign Service, served in Baghdad from February 2004 with the Coalition Provisional Authority and then as embassy’s Baghdad political/military liaison with the Multinational Command. In earlier positions he was director of the Office for Iran and Iraq, deputy chief of mission in Abu Dhabi, United Arab Emirates, and in Sanaa in Yemen, and principal officer in Tabriz, Iran.

Neumann is the author of a memoir, Three Embassies, Four Wars: A Personal Memoir (2017) and The Other War: Winning and Losing in Afghanistan (Potomac Press, 2009), a book on his time in Afghanistan. He received State Department Superior Honor Awards in 1993 and 1990. He was an Army infantry officer in Vietnam and holds a Bronze Star, Army Commendation Medal and Combat Infantry Badge. In Baghdad, he was awarded the Army Outstanding Civilian Service Medal. In 2018 he was awarded the American Foreign Service Association’s award for Lifetime Contributions to American Diplomacy.

No stranger to the Inland Empire, Neumann earned a B.A. in history and an M.A. in political science from the University of California, Riverside.

Visit the council’s website for more information on the program or the World Affairs Council Inland Southern California. 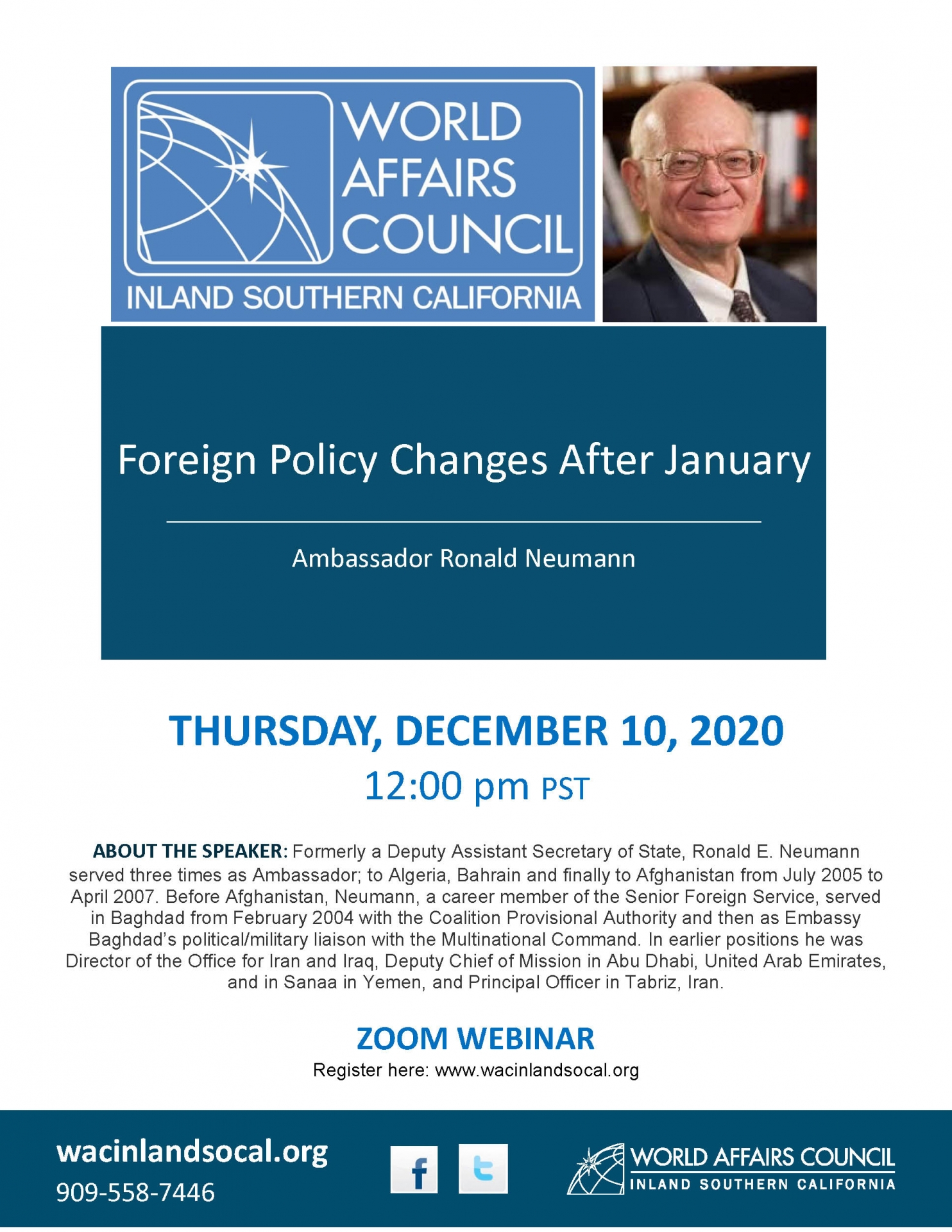