Jane Elliott returns to CSUSB via webinar to inspire activism

While race relations in the United States are arguably not as contentious as they were in the years leading up to the Civil Rights movement of the 1960s, it can also be said that racism and its related problems must still be overcome some 50 years later, especially in the wake of the death of George Floyd in Minneapolis, Minn., on May 25, and the protests that followed.

On Wednesday, Sept. 23, Cal State San Bernardino’s Institute for Child Development and Family Relations (ICDFR), Psi Chi Honors Society and the College of Social and Behavioral Sciences will bring via webinar one of the vanguards of change during the late 1960s when it presents “Jane Elliott: Inspiring Activism.”

Elliott’s presentation will take place virtually beginning at 10 a.m. Advance registration is required to attend the webinar, and can be done at the Jane Elliott: Inspiring Activism webinar registration webpage. Participants may also submit a question to Elliott through the registration page.

Elliott will talk about efforts to fight racism and her lifetime of anti-racism activism, which will be followed by a question-and-answer period.

Now 86, Elliott was the teacher who conducted the “Blue Eyes/Brown Eyes” exercise not long after the assassination of Civil Rights leader Martin Luther King Jr. in 1968. She continues to, as her website states, expose “prejudice and bigotry for what it is, an irrational class system based upon purely arbitrary factors.”

Elliott continues to work as a diversity trainer and lecturer who is recognized most prominently as an anti-racism activist and educator. She has been the focus of two television documentaries, “Eye of the Storm” in 1971 and “A Class Divided” in 1985, and has received many awards, including the National Mental Health Association Award for Excellence in Education.

Both documentaries focused on what Elliott did with her students the day after King was killed. Elliott spoke to her class about racism, but felt that her students, all from the small Iowa town of Riceville, didn’t comprehend how harmful racism could be. She asked her students if they wanted to participate in an exercise to see how discrimination worked. The students agreed.

As the activity progressed, the blue-eyed students became arrogant, bossy and otherwise unpleasant to their “inferior” classmates. Their grades also improved. The brown-eyed “inferior” classmates changed into timid and subservient children, who isolated themselves during recess. Even their studies suffered.

The children’s compositions were printed in the local papers and the story was picked up by the national news media. The story led to Elliott being invited to be a guest on “The Tonight Show Starring Johnny Carson” to talk about the exercise and the children.

After her appearance, the “The Tonight Show” received hundreds of phone calls and letters, many of them complaining.

But not all the reaction was negative. As more people learned about the exercise, Elliott was asked to repeat it, and the activity eventually evolved into professional training for adults. In 1970, Elliott staged the exercise for adults at a White House Conference on Children and Youth.

Since then, Elliott has continued to do the Blue-Eyed/Brown-Eyed exercise, which is considered as the basis for diversity training. She has done training for corporations including General Electric, Exxon, AT&T and IBM. Elliott has also given lectures on diversity to the FBI, IRS, the U.S. Navy, the U.S. Department of Education and the U.S. Postal Service.

No stranger to Cal State San Bernardino, Elliott presented a diversity lecture on campus in 1998 as part of the Conversations on Diversity lecture series, as a guest speaker for psychology social sciences classes in 2014 and 2015, and returning in 2016, 2017 and 2019 for campus-wide presentations.

Visit Jane Elliott’s website for more information about her work. 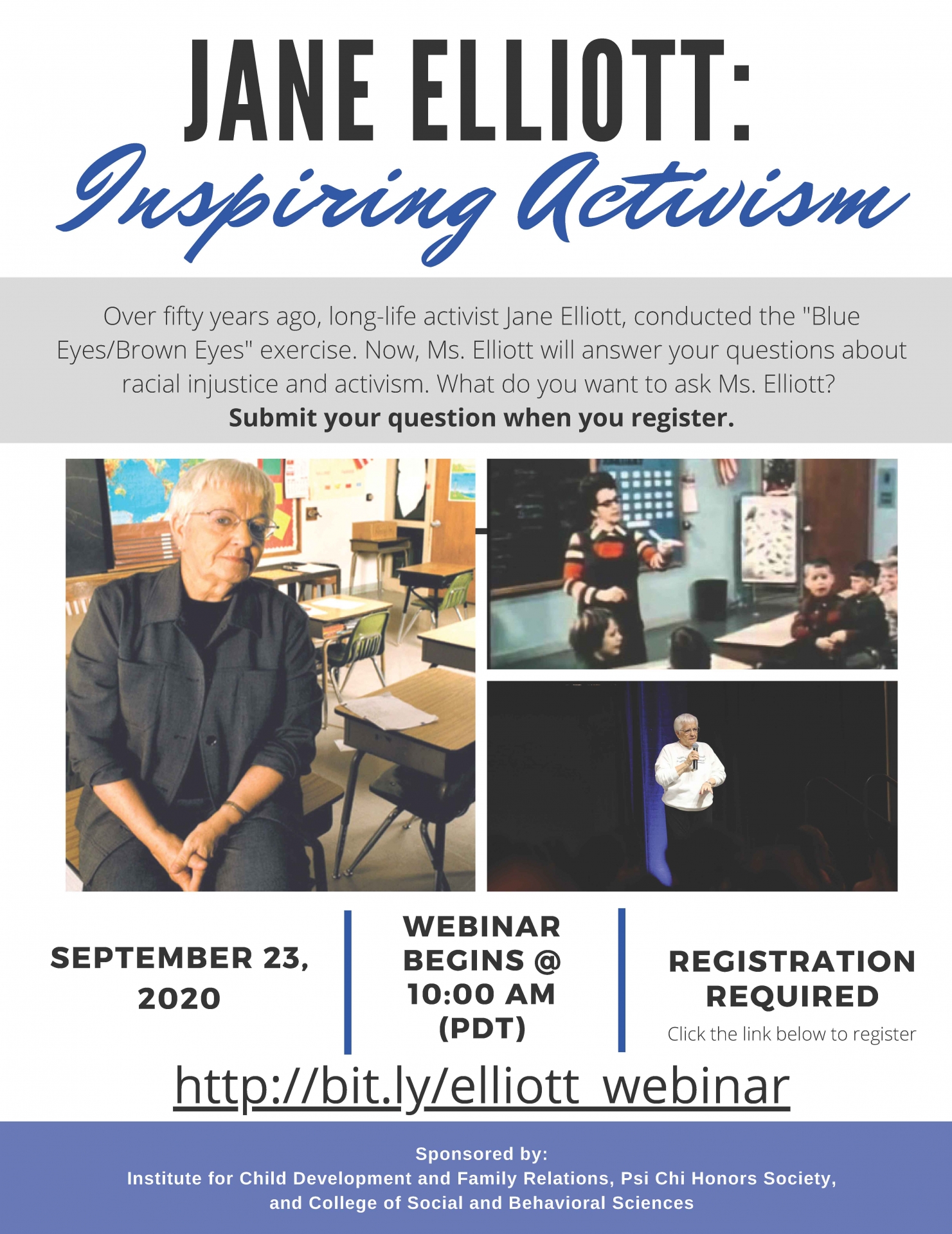 April 19, 2019 ‘Jane Elliott on Race and Racism’ presented at CSUSB
View All News