Bryan Castillo (MS, Earth and Environmental Sciences, ’19) was among several geologists, students, researchers, and others who traveled from near and far to investigate the damage wrought by the July 4 and 5 quakes near Ridgecrest.

The July 4 and July 5 earthquakes near the desert communities of Ridgecrest and Trona shocked and frightened hundreds of thousands across California. For Bryan Castillo – or “Earthquake_Dude” on Twitter – the opportunity to see the aftermath firsthand was like going to Disneyland. The Cal State San Bernardino Department of Geological Sciences alumnus and earthquake geologist spent two days near the two desert communities, along Highway 178, to collect scientific data of the largest temblor to hit the Golden State in 20 years. While he has been studying earthquakes for years – his master’s thesis was on a portion of the San Andreas Fault – last week’s big shake-ups were his first chance to study the aftermath of one in the field. “I’ve been waiting for a decent-sized earthquake to happen in Southern California in which I could drive to and look at the results,” said Castillo (MS, Earth and Environmental Sciences, ’19). “So, this is a first. That’s why it’s completely very exciting.” Castillo was among several geologists, students, researchers and others who traveled from near and far to investigate the damage wrought by the quakes.The magnitudes of the July 4 and July 5 earthquakes that were centered close to Ridgecrest and the nearby town of Trona were measured at 6.4 and 7.1, respectively. The quakes cracked walls, damaged some structures, and interrupted services such as water and electricity. So far, only one death has been reported. It was the 2008 Chino Hills earthquake (magnitude 5.4) that occurred when Castillo was a high school student in Los Angeles that sparked a potential interest in the geological sciences. “It sparked a curiosity, as in, ‘Wow. I can’t believe something so powerful can move buildings like that,’” he said. Castillo’s academic interests continued to develop through community college – he eventually decided becoming an earthquake geologist appealed to him – and he went on to earn a bachelor’s degree in geophysics from Cal State Northridge. One of his undergraduate advisers recommended several leading experts in paleoseismology – the study of ancient earthquakes – in his pursuit of graduate studies. One of the recommendations was Sally McGill, a CSUSB Department of Geological Sciences professor (and CSUSB College of Natural Sciences associate dean) whose research aligned with Castillo’s interests. It helped that the university’s environs were a lure. “It’s a really beautiful campus,” Castillo said. “Plus, the San Andreas fault is right near campus. That was another thing that sold me.” Castillo has excelled in his CSUSB studies. In June, he was named the Department of Geological Sciences Outstanding Graduate Student. “Bryan Castillo has been an enthusiastic student of earthquakes since I first met him about three years ago,” McGill said. “His master’s thesis work provided the first information ever available on the timing and frequency of large, prehistoric earthquakes on a southern portion of the San Andreas fault. After studying sedimentary layers offset by prehistoric earthquakes, as exposed in a trench across the San Andreas fault, I am so glad that Bryan has now had the opportunity to contribute to mapping and documenting the surface rupture of a major earthquake while it is still fresh.” Castillo recently took on the role of adjunct professor in the department and is currently teaching a two-unit summer seminar on earthquake science and public policy – his chief interests. Castillo even adjusted one of his seminar’s lectures this week to discuss his recent findings. He will continue to teach during the 2019-20 academic year. But it was the latest quakes that offered valuable out-of-the-classroom experience. After the first quake struck, Castillo was contacted by Dylan Terry, a geological studies master’s student and volcanologist, who alerted him to a call to study the aftermath. It was an opportunity he could not turn down. The most recent big shakers to hit California include Hector Mine (magnitude 7.1) in October 1999, Northridge (magnitude 6.7) in January 1994, and Landers (magnitude 7.3) in 1992. Castillo was too young at these times to study them and other big earthquakes, such as the ones that struck Peru in May and Japan in 2011, were too far away. “To get a chance to see the surface rupture of an earthquake is beyond exciting for me,” Castillo said. “I had to take advantage of it.”

While at Highway 178, Castillo, Terry and others took measurements, mapped the area, and took photos to gather valuable information for California Earthquake Clearinghouse, a volunteer-run effort to “coordinate earthquake field investigations and share observations and knowledge among emergency responders, engineers, and scientists,” according to the website.

They saw ruptures along the surface of the ground and highway, small fissures, sand blows – formed from the eruption of water and sand to the ground surface – and other characteristic aftereffects. “It’s a wonderful opportunity,” Castillo said. “Again, I’ve never seen the effects after an earthquake, so going out there was exciting.” They also saw a displaced fence near the Naval Air Weapons Station China Lake, a military installation, and a set of railroad tracks that had been warped. “It was also humbling to see the power of these earthquakes and what damage it wrought to infrastructure such as to the roads and water mains,” Terry said. Overall, the experience of studying a fresh earthquake’s impact for the first time, Castillo said, was a “dream come true.”

While at Highway 178, Bryan Castillo, Dylan Terry, a geological studies master’s student and volcanologist, and others took measurements, mapped the area, and took photos to gather valuable information for California Earthquake Clearinghouse, a volunteer-run effort to “coordinate earthquake field investigations and share observations and knowledge among emergency responders, engineers, and scientists,” according to the website. 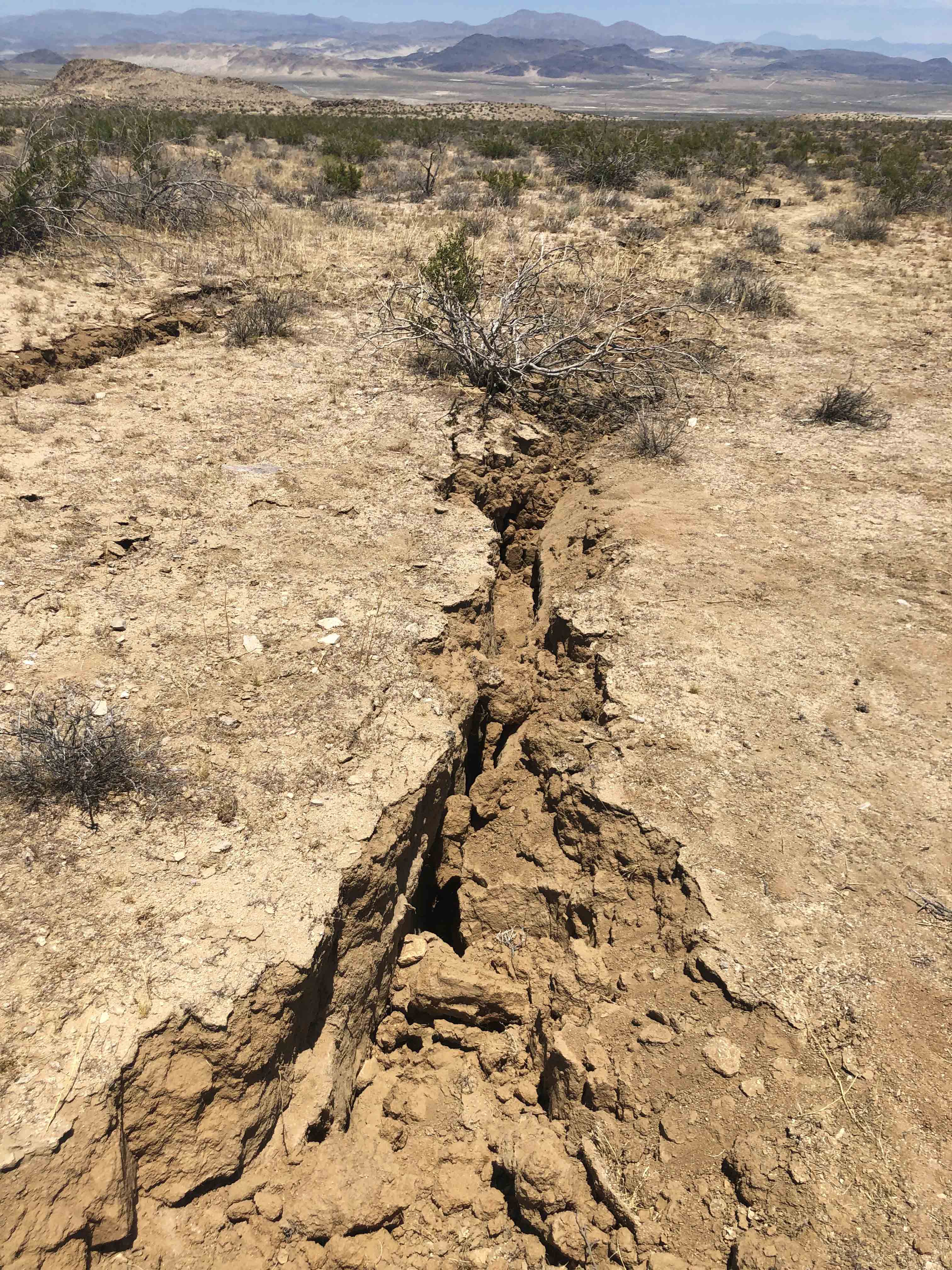