Early inhabitants of Southern California left behind artifacts that provide insight into their societies. These artifacts survived for millennia, but the encroachment of modern society escalated the destruction of known sites. In 1947 archaeologists at the Southwest Museum in Los Angeles founded the Archaeological Survey Association of Southern California to locate and explore sites and to record information on those sites before that information was lost forever. On the title page of the spring-summer 1988 issue of the ASA Journal the association’s mission was defined: 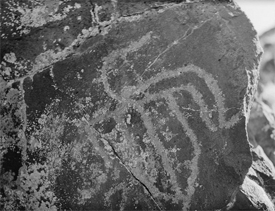 Bird petroglyph photographed in Black Canyon by Charley Howe in 1952. The image was later adopted by the ASA as the assocation's logo.

"…to promote the preservation and conservation of archaeological material; to assist in the scientific archaeological survey of Southern California; to engage in salvage work of sites in danger of being destroyed; to aid museums, universities and other accredited institutions interested in archaeological investigations and research; and to promote public understanding of and appreciation for archaeology."

Professional and amateur archaeologists joined the association and worked together to document the region’s history.

Petroglyph of big horn sheep,
the image is being destroyed
by lichen.

Charley Howe (1897-1989) joined the Archaeological Survey Association of Southern California in 1948. Professionally he was a shop owner; but he had a passion for archaeology. He would hang a sign on the door of his shop and head into the desert with other ASA members. He participated in surveying sites and he documented the association’s work through photography.

Charles Howe authored occasional paper number 11, "A Prehistory of Black Canyon" for the ASA. Art Robbins wrote the introduction in which he describes the survey of "Inscription Canyon." Charley Howe's interest in the site sparked exploration by a few archaeologists, students, and photographers. The reports from that small group led to a prospecting trip in which 100 people began a survey of the area. The information gleaned by that pilot survey convinced archaeologist Dee Simpson of the Southwest Museum that it was an important site that warranted an in-depth survey. The Southwest Museum and the San Bernardino County Museum sponsored the survey which was conducted by the ASA. Robbins describes the importance of the survey results: 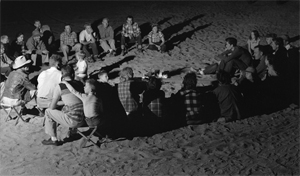 "This led to work which is still going on of the uncovering of the past history of Man, a life work, spreading through- out the Mojave Desert. The true date of the beginning of Man's occupation is still in question. Each time someone in this research reaches a conclusion of an age of an area and material, greater finds show up, moving the date of residence in a given area back much further."

Charles Howe's leadership, imagination, and passion for archaeology led to collaborations with other ASA members. They created inventions for excavating sites and documenting findings. Charles Howe and Clyde Price utilized parts from a Sears refrigerator in a device designed to sift the dirt during site excavations. Charles Howe and Clifton Clouse developed a method to capture multiple views of an object in one photograph. Charles Howe worked with artist Charles LaMonk to create a painting tool so that LaMonk could paint reproductions of the rock art found by the ASA. (Remember that, at this time, there was no color photography.) Charles Howe led many association digs and served as the association's field chairman for seven years. He was elected ASA president in 1970. In 1976 the association honored Charles Clayton Howe and at the celebration, Chizomana Ishii, ASA past-president and niece of Hopi Chief Sekakuku, delivered a poem that she'd written for the occasion. In it she lauded the strength, integrity, and compassion of Charley Howe who, in her words, was:

". . . filled with kindness and understanding Seldom found in these days of great demanding. Few know and comprehend the desert as he, Who has been the shining example for all to see . . ."

Charles Clayton Howe photographed every aspect of the work at the archaeological sites on which he worked. The collection includes photographs of artifacts, archaeologists, and petroglyphs and pictographs. The images of rock art as it was half a century ago are particularly valuable since there has been significant deterioration of many of the sites since they were photographed. In many cases the image captured in Charles Howe's photograph is more complete than the present-day petroglyph at the site.