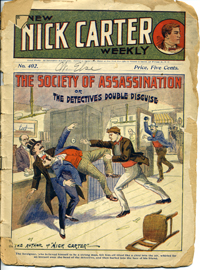 Pulp fiction magazines thrived in the early 20th century. Detractors saw them as cheap fiction: created through cheap printing on cheap paper and comprised of stories written by cheap authors. Promoters felt that the story was more important than the paper on which it was printed (which was the cheapest wood-pulp paper) and pointed out that upcoming and well-known authors sold stories to the "pulps." (The pulps were appreciated by authors because they paid on story acceptance (rather than printing) and so were a good source of ready cash.)

Publisher Frank Munsey began a children's magazine entitled Golden Argosy, Freighted with Treasures for Boys and Girls, in December 1882. It was not hugely profitable. In 1891 he retooled it, he redefined the audience as adult, repositioned it as an all-fiction magazine, redesigned it to take advantage of cheap rough wood-pulp paper, and renamed it Argosy. As a magazine (instead of a dime novel) it was eligible for the second-class (cheap) postage rates... circulation soared.

Other pulp fiction titles followed, published by Munsey and others. By 1923 the dime novel was gone and pulp fiction magazines were the dominant form for romance and adventure fiction. By the time of the Great Depression there were over 200 separate pulps on sale. For the most part each had its own genre niche. There were titles devoted to mystery, espionage, science fiction, horror, fantasy, adventure stories, romance and westerns.

All of the titles are cataloged into the Pfau Library online public access catalog (OPAC). There is a series heading "Pulp Fiction Collection" that can be used to bring up titles (or search by title, as you would for any other publication). Alternately, there are Microsoft Excel sheet finding aids below.