Editor’s note: This part of a series of profiles of faculty and their research by Montgomery Van Wart, a professor of public administration and a CSUSB Faculty Research Fellow in Faculty Affairs and Development. In this article, he features David Carlson, chair of the English department, and his work in interdisciplinary research, simultaneously studying various subjects.

Research has undergone a substantial change in recent years. The world of applied research has become more dominated by the need for interdisciplinary research efforts. Applied journals and grant agencies are demanding broader views of how to apply the results of pure research and avoid the oversights, pitfalls and impracticalities that too narrow a perspective can incur. One trend in research is the increasing use of research teams in areas that have not seen them before, such as in the humanities and social sciences. 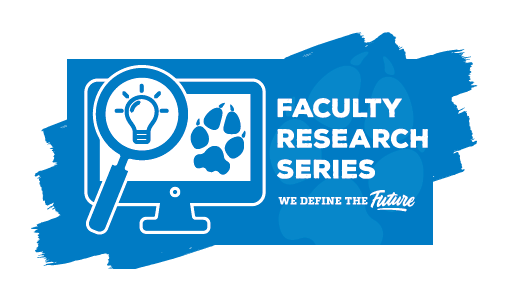 Yet some researchers have found that they enjoy the challenge of bringing together incongruous fields themselves. On one hand they find exploring unorthodox fields less constricting and on the other they find the prospect of seeing connections between them – where none have seen them before – exciting.

The challenges of exercising this academic “split personality” are obvious: more to understand, master, research and explain. But the opportunities are exciting for academics who are not afraid to get quizzical looks when they initially answer the question: What is your area of research?

The opportunities of interdisciplinary research include greater realism, enhanced applicability, and fresh insights into the complex world in which we live. David Carlson, chair of the Cal State San Bernardino Department of English, is an example of someone who has taken on interdisciplinary research with panache. His overall research is integrating the fields of indigenous culture, law and literature. He enjoys immersing and merging his simultaneous study of sociology, systems of authority, and aesthetics.

“For me,” Carlson says, “taking an interdisciplinary approach has been the only way to adequately understand the literary history of the United States, which is entwined with our settler colonial heritage. The indigenous writers who I study, in particular, have lived and written in the shadow of powerful, colonial legal institutions for centuries. You can’t comprehend their experiences and creative expression, or respond to them in an ethical way, without taking a broad perspective in your research.”

Carlson, who has a Ph.D. in English literature, explores how indigenous peoples are continuously striving toward sovereignty and self-determination, with the ultimate goal being decolonization.

He says that he reflects carefully on the “appropriate contributions allied scholars can make supporting that work.”

As a “settler” scholar (a non-indigenous person working in the field of indigenous studies), he acknowledges the ways that academic research can be bound up in the social, political and economic structures that underpin settler colonialism. He also takes seriously the need for deference and respect in researching and writing about a culture not his own, and his approach to studying the problems confronting indigenous peoples also emphasizes the importance of tribal solutions, not federal or non-Indian ones.

For example, his research on the proposed Constitution of the White Earth Nation (Anishinaabe) highlights how indigenous community standards, and not colonial definitions of “blood quantum,” should determine tribal citizenship and identity.

Over the past 20 years, Carlson has explored the connections between law and literature in a wide range of contexts. He has examined important 19th and early 20th century Native American thinkers, such as William Apess and Charles Eastman, whose writings address the U.S policies of removal and assimilation. His more recent work – exploring the work of Native American writers such as Elizabeth Cook-Lynn and Gerald Vizenor – can be thought of as a “historical journey through the parallel histories of tribal governments and Native American Literatures from the 1930s to the present.”

Carlson examines how tribal peoples fight legal and political battles in federal courthouses and before congressional committees. He then connects that story with what Vizenor calls the “word wars” writers wage on the pages of their novels, poems, autobiographies and plays.

Ultimately, while recognizing the ambivalence of the concept of sovereignty, which has often been employed to erase and dominate American Indian peoples, Carlson argues that “indigenous engagement with western law can, in fact, advance the overall project of decolonization.”

So for some researchers, the road to knowledge creation is not the ever-narrower specialization in a single topic with increasingly robust scientific methods, but rather the intricate weaving together of different domains of knowledge. It provides wonderful possibilities to not only do the unusual, but to be proactive and relevant by bridging fields that already overlap in the real world. Interdisciplinarity and impact, he notes, is “all the more important in humanist disciplines today” if they want to remain meaningful and relevant.