What to expect from a Philosophy Major

Philosophy's range of application is particularly broad. Through philosophy one may think about and develop perspectives on topics as diverse as god, science, language, logic, truth, ethics, politics and law. Typically philosophy leaves aside the doing of the religion, science, etc. and asks fundamental questions about the nature of and justification for the various perspectives. Philosophy is valuable just for the significance of the questions it asks, and skills it develops.

Here are some questions you might encounter in a philosophy class: What is the nature of the mind?  Is it identical with the brain? Does God exist?  If so, what is God like? Can we prove such a being exists? What makes an action right or wrong?  What makes a society a just one? What distinguishes science from non-science?  What is a scientific theory? Are numerals (like "4") names for objects?  If so, what are these objects (presumably numbers) like? What is knowledge?  Under what conditions do you have it?

The philosophy major requires a (relatively) low number of units, and is often added as a second major. Provision is made for internships, independent research projects, honors program, and minors. Small class sizes ensure personalized attention. The Logic Lab is a gathering place for majors, with tutors and specialized software. An outstanding faculty includes published scholars, active researchers and experienced teachers.

Here is some information about why "Philosophy is a Great Major."

For questions of any sort about the philosophy program or degrees, please talk to a faculty member or contact the Philosophy office at UH 235, 909 537-5869, philosophy@csusb.edu. See also Philosophy Advising.

The Minor in Philosophy requires 18 units. It is a sort of a reduced version of the major, especially useful for students who desire a grounding in philosophy short of the full major. Since each course in the minor is included in the major, the minor is easily "converted" to a philosophy major. See also Handout of Philosophy Minor.

The Minor in Philosophical Logic provides an opportunity to learn logic at a level rare in undergraduate institutions in the United States. The logical material is foundational to disciplines as diverse as philosophy, mathematics and computer science. The logic minor consists of 18 units including PHIL 2100, PHIL 3100 and an additional four courses to push beyond that required of CSUSB Philosophy majors. See also Handout of Philosophical Logic Minor.

The Law and Philosophy Minor enables students to examine what makes law valid and the extent to which its claims on us are legitimate -- while at the same time developing skills necessary for succeeding in law school and becoming a well-rounded lawyer. The minor requires 18 units, 9 units of core requirements and 9 units of electives. For details view this handout. See also Handout of Law and Philosophy Minor.

Because of its general nature, people trained in philosophy appear in just about every career field. Philosophy is excellent preparation for a career in education, law, business, government, religion, journalism, etc. and for different sorts of graduate and professional study. See "The career trajectories and workplace skills of philosophy majors." You may also want to read this open access book, What can I Do with a Degree in Philosophy?

Philosophy focuses on clear thinking and writing, and critical evaluation of unusual and unorthodox ideas. These are are skills that will serve you well in any context. As is the case with most liberal arts majors, philosophy does not provide training in specific job tasks. Rather, it focuses on basic skills that will prepare you for the more challenging tasks to which you will advance over your career.

Philosophy is valuable not only intrinsically, but also practically. Students who major in philosophy do well compared to many other majors. For data on careers for philosophy majors, see our short slideshow, Philosophy: What can you do with that? additional and related information is available at Value of Philosophy and Philosophy: What can it do for you? And if you are concerned about the potential earning power of somebody with a degree in philosophy, read this article, philosophy majors make more money than majors in any other humanities field.

Some of the same information is recapitulated below: 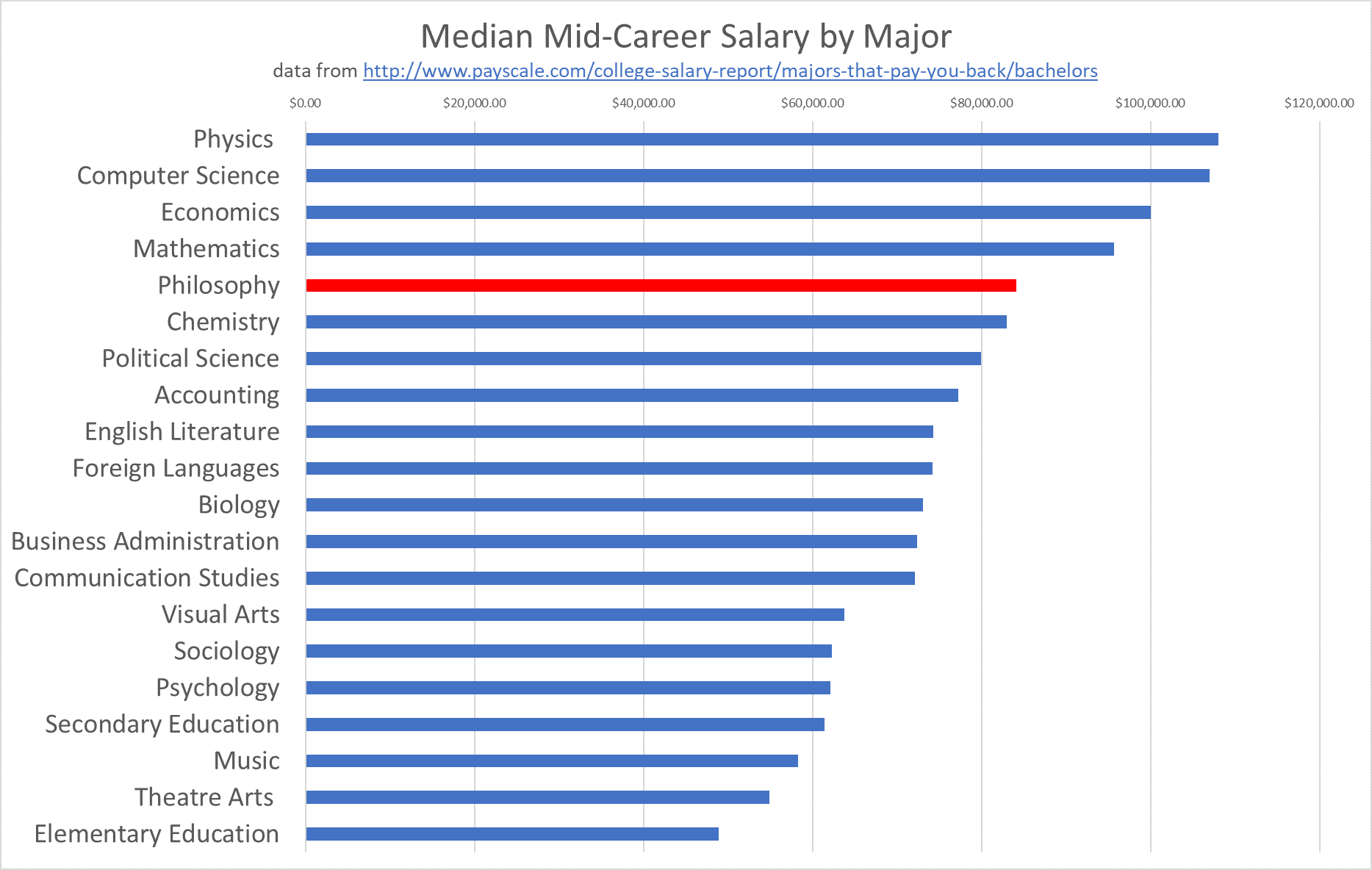 2. Philosophy majors get into law school (10 most common pre-law majors): 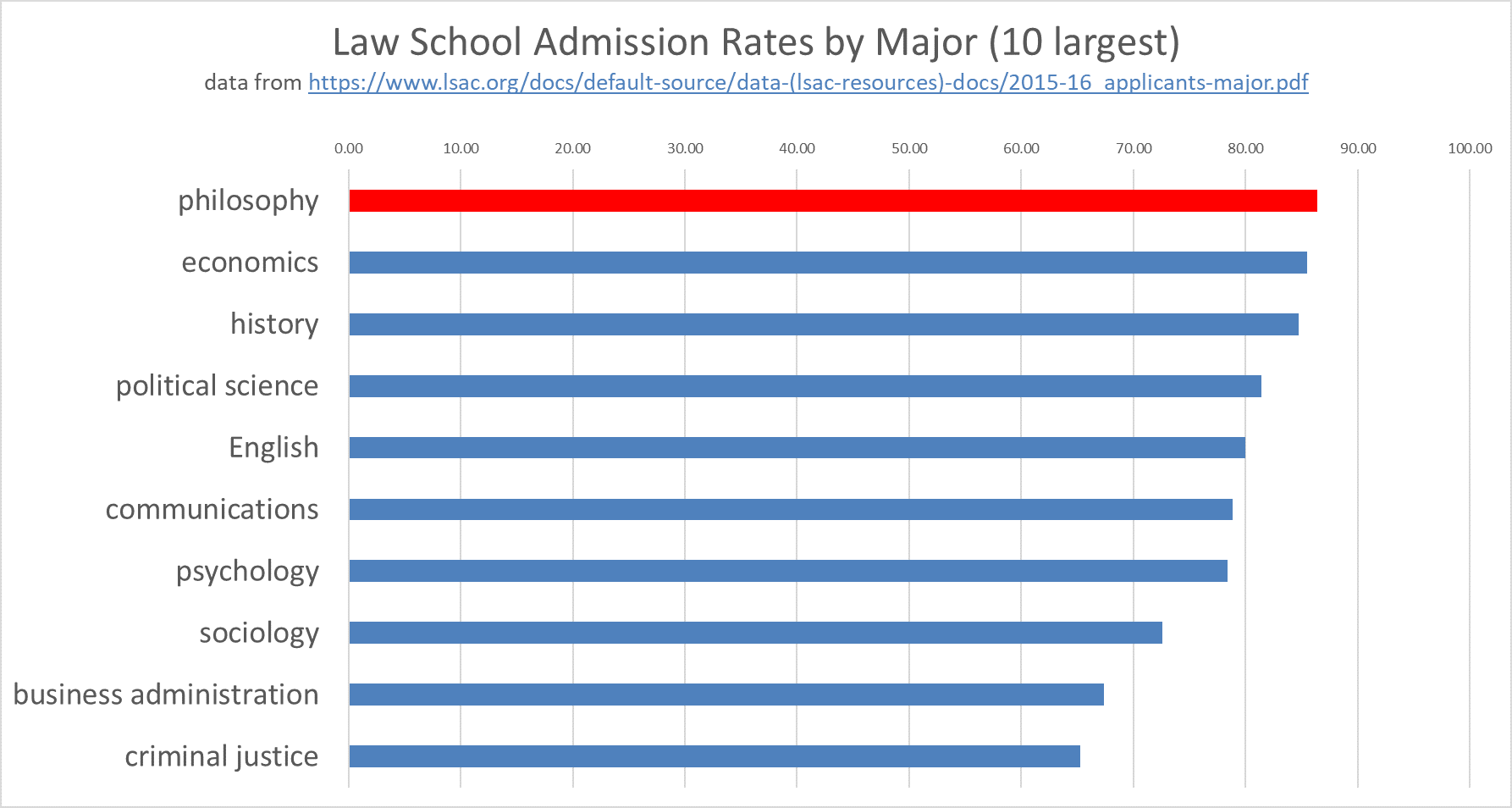 Philosophy majors do well on the Law School Admissions Test. 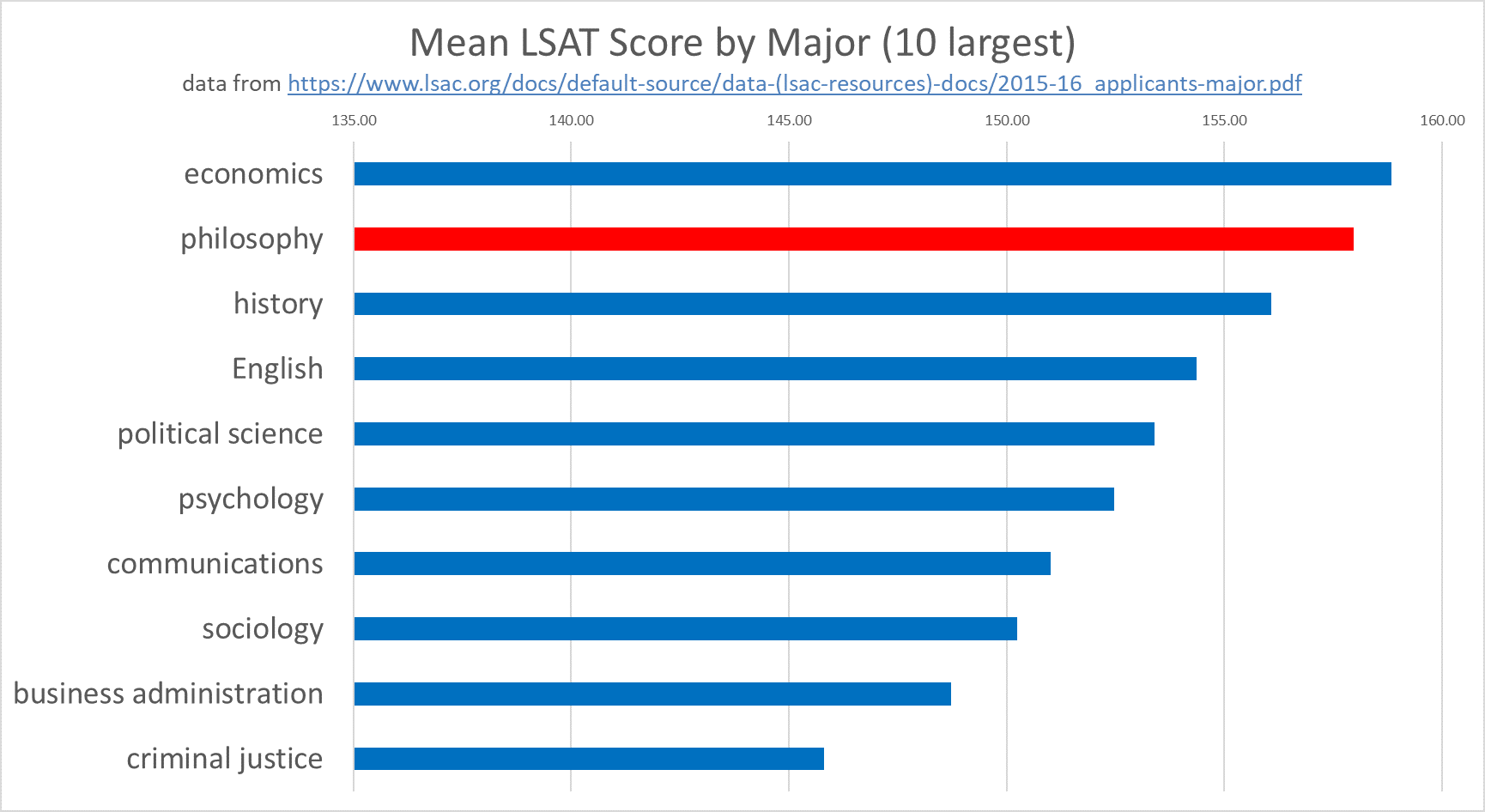 4. Philosophy majors do well on the Graduate Management Admissions Test (for the MBA): 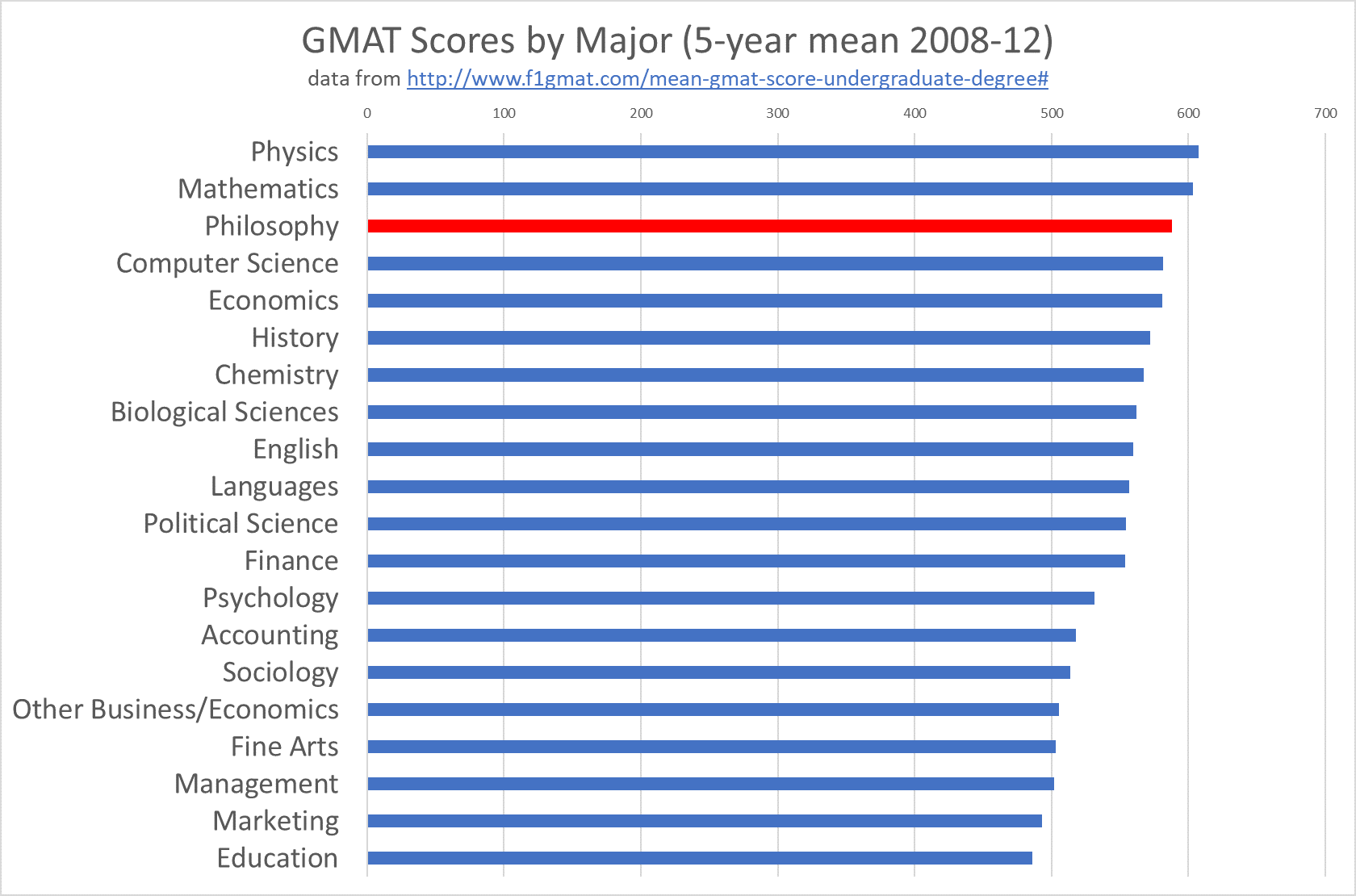 5. Philosophy Majors do well on the Graduate Record Exam (for disciplines with PhD): 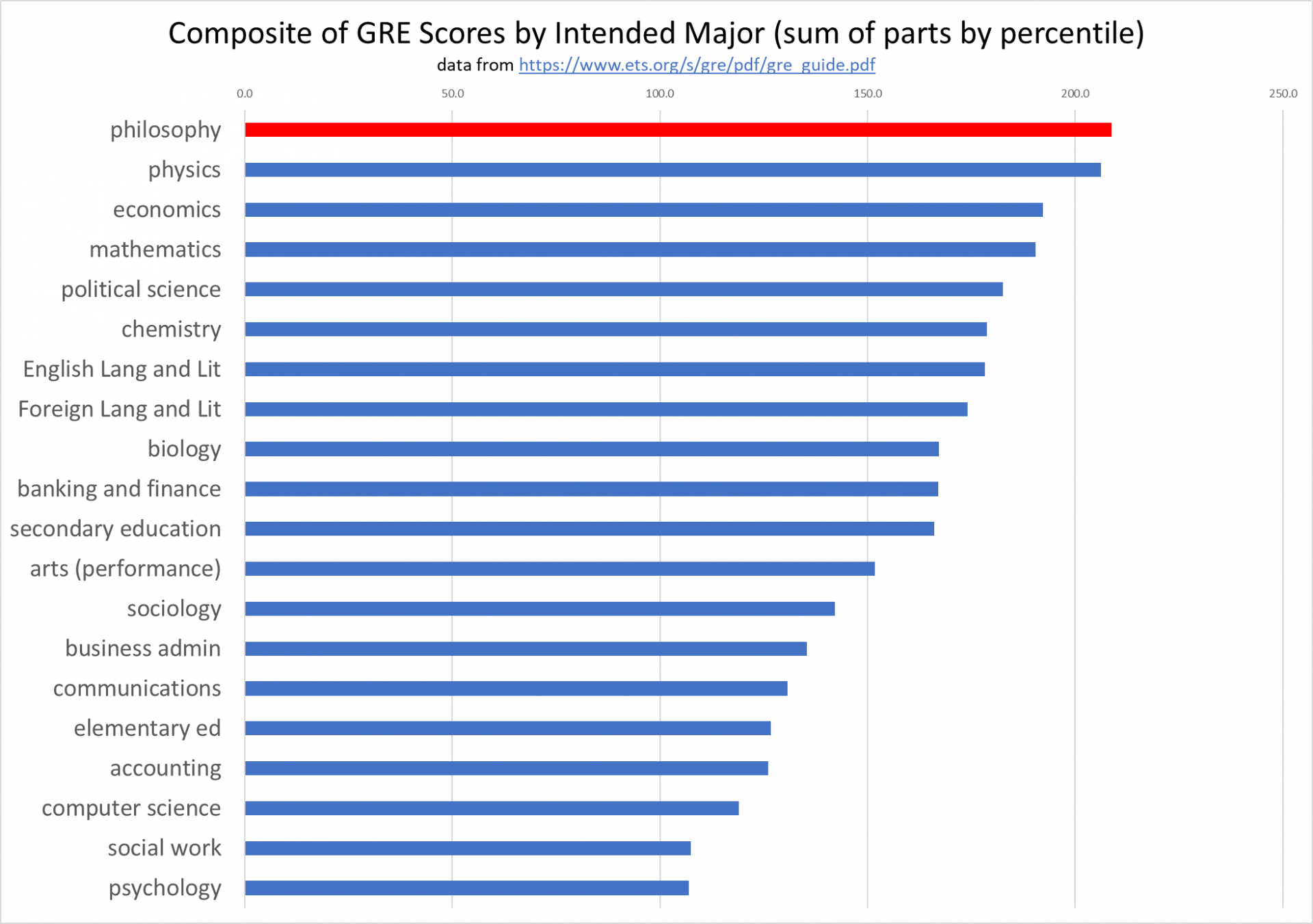 Data from GRE Guide to the use of scores (2016-17). This data is by intended graduate major — though it is reasonable to think that the bulk of students intend the same major as their undergraduate degree. Similarly below. 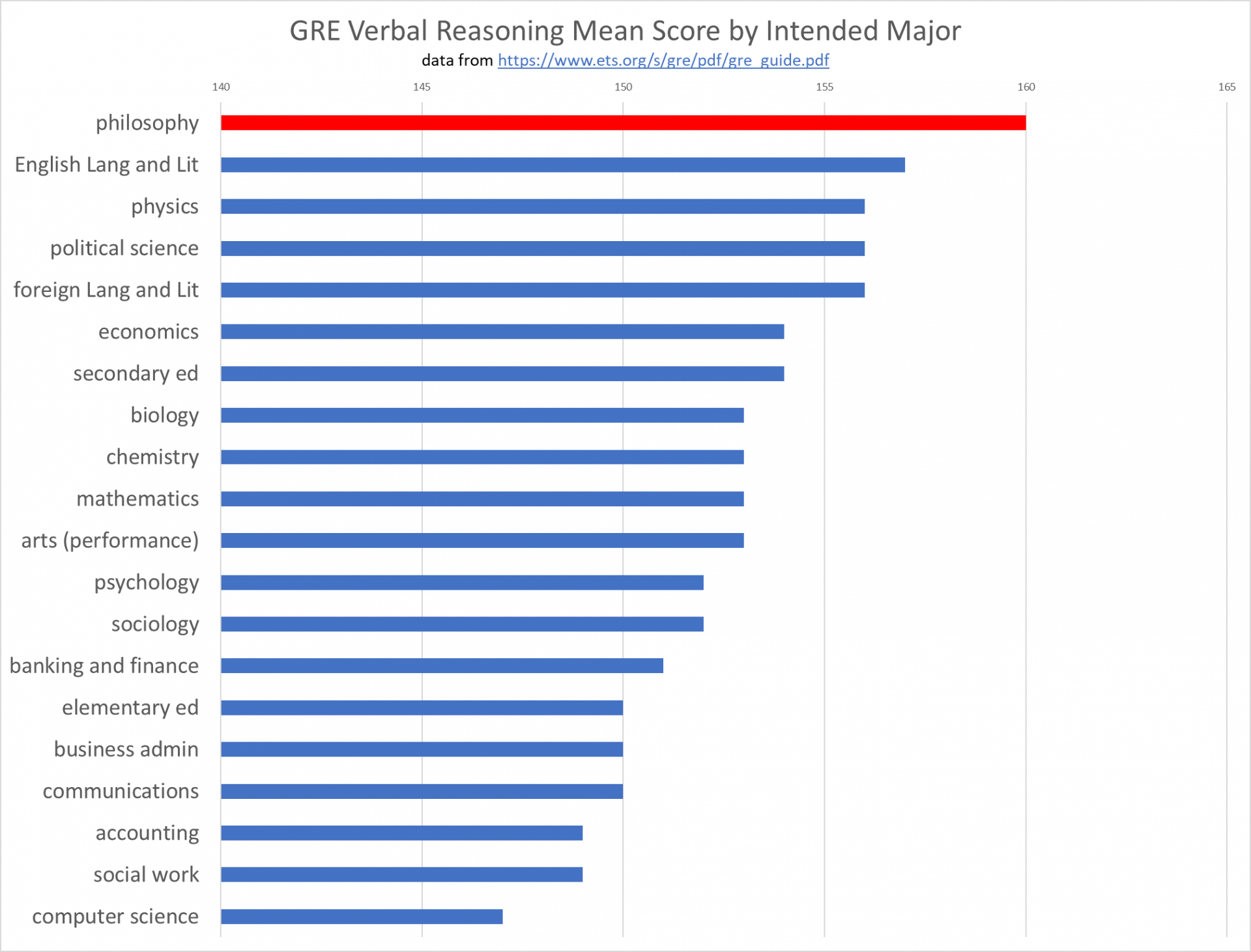 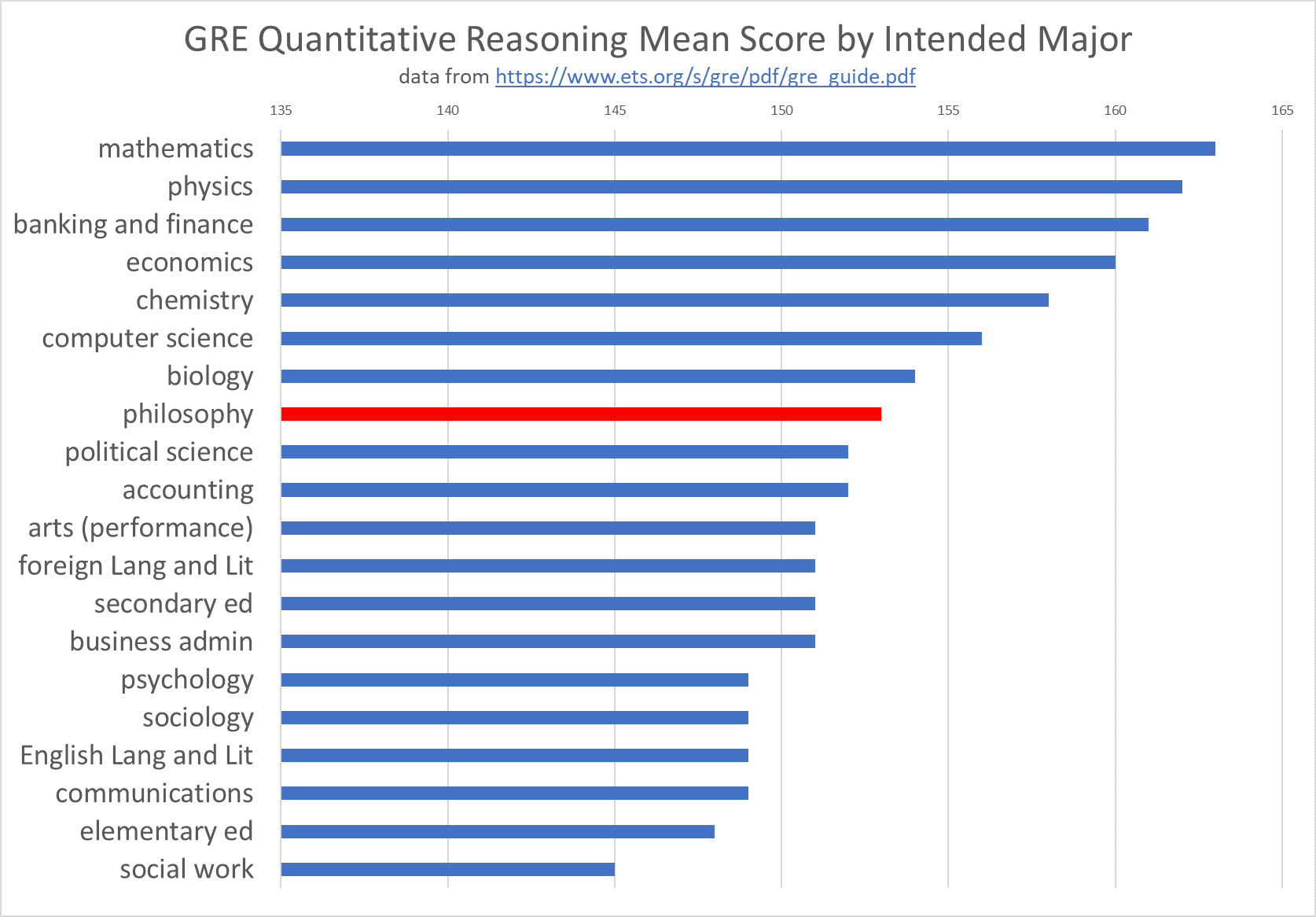 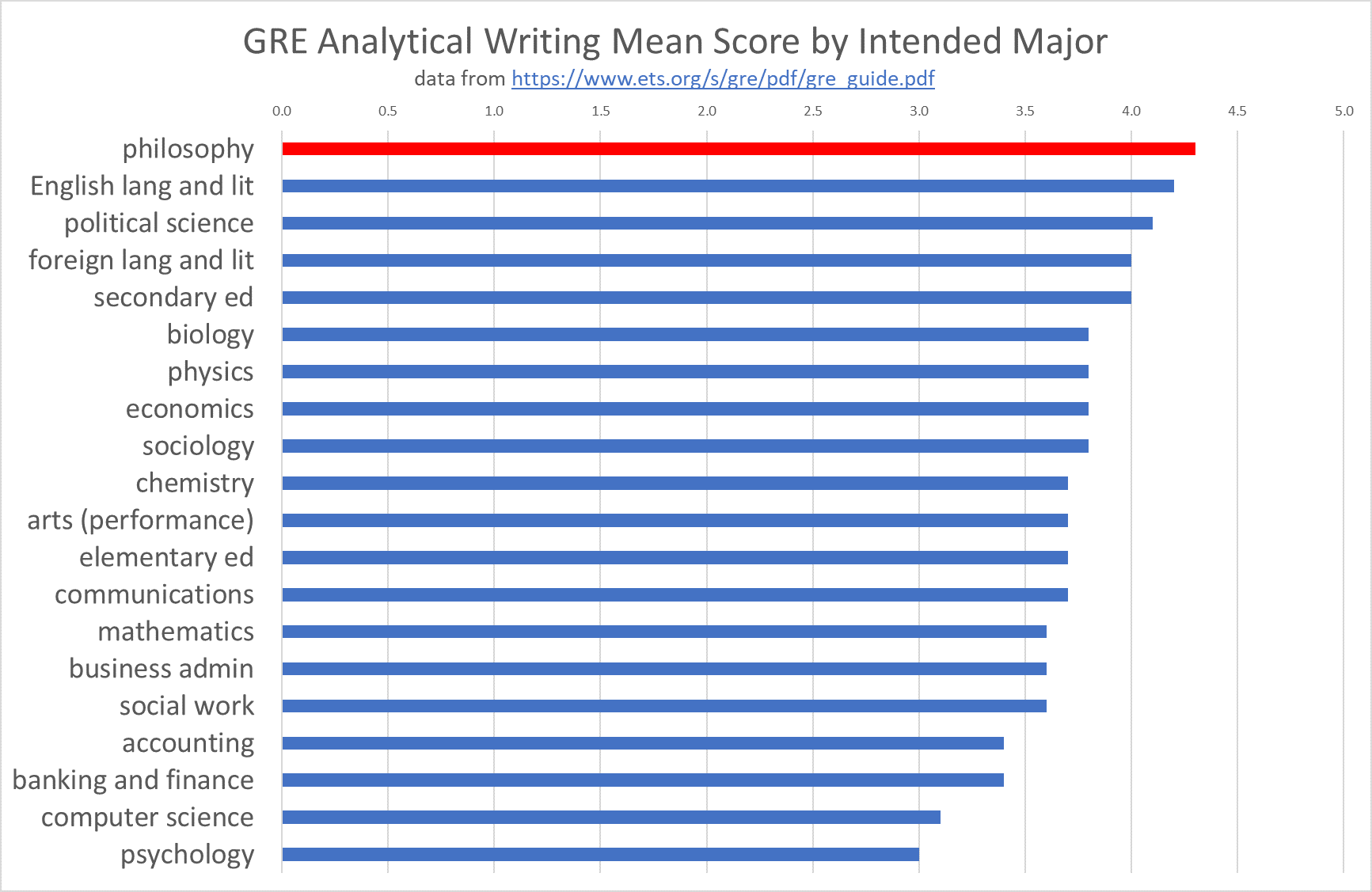 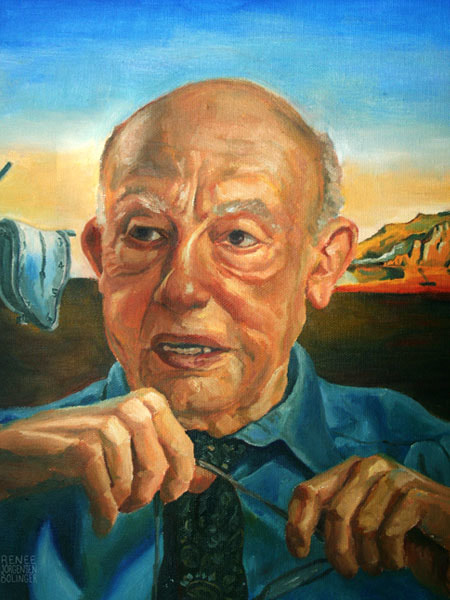 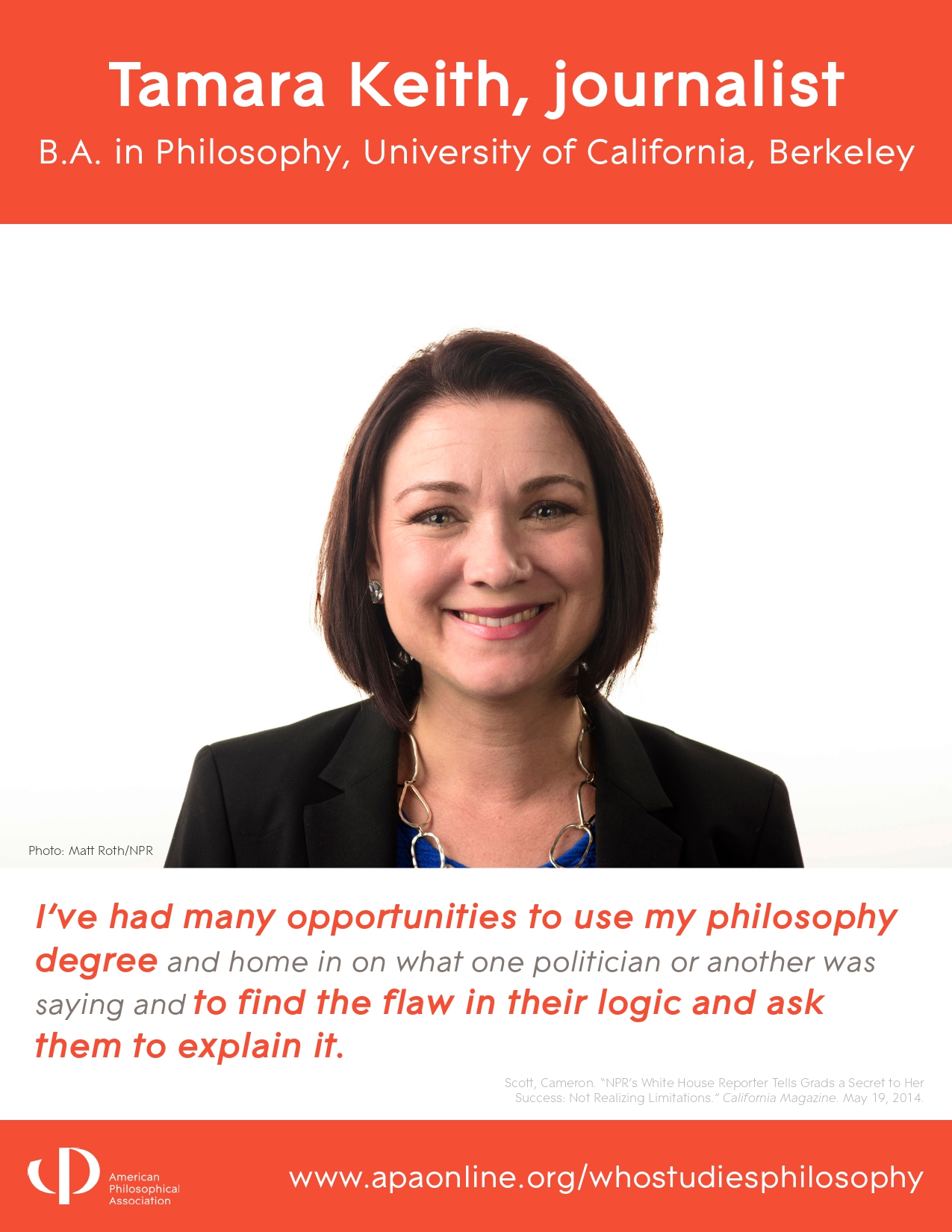 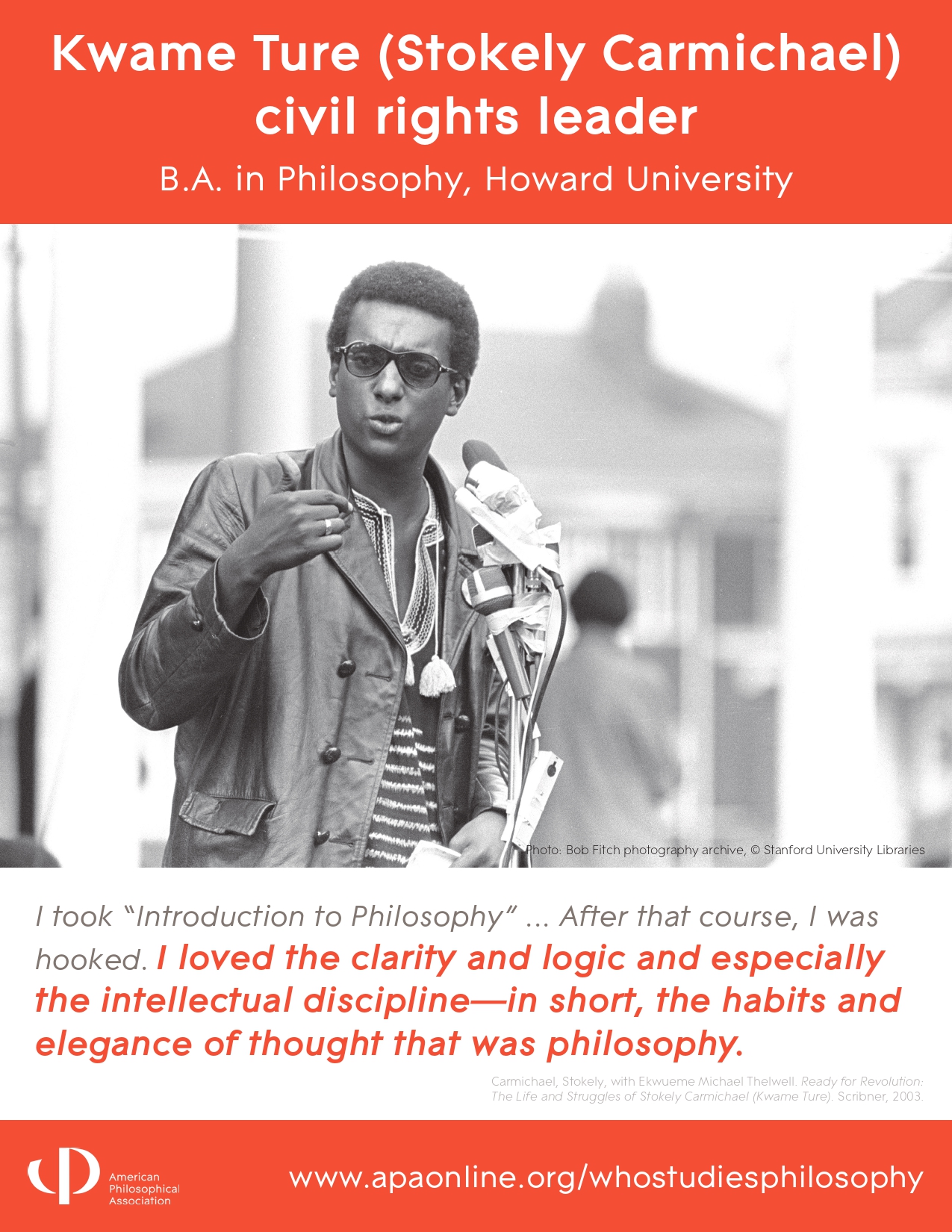