The NEA grant has allowed the CSUSB Opera Theatre to create two full-length works this spring semester, with one that premiered last month and the next, “The New Frontier: An Atomic Age Jazz Opera,” to premiere on March 24.

A $15,000 grant awarded last year to the Cal State San Bernardino Department of Music has allowed the CSUSB Opera Theatre to create and release “New Frontiers: Multimedia Monodramas,” a series of multidisciplinary, multimedia monodramas and arts events focusing on aspects of new frontiers, California, diversity, women and the idea of the West.

The Grants for Arts Project, awarded by the National Endowment for the Arts, has helped CSUSB recently create two full-length works this spring semester: “Why Women Went West: I Mary, Mary by Herself,” which premiered at Cal State Fullerton in February, and “The New Frontier: An Atomic Age Jazz Opera,” which will premiere at CSUSB on Thursday, March 24, at 7:30 p.m. in the Performing Arts Recital Hall. These shows will also be shown in other venues throughout California and Santa Fe, New Mexico.

“We are very excited to be producing these NEA winning works, both at CSUSB and CSU Fullerton,” said Stacey Fraser, CSUSB professor of music, soprano and the project director.

The monodramas are among the more than 1,100 projects across America totaling nearly $27 million that were selected during a second round of Grants for Arts Projects fiscal year 2021 funding. They are produced by Cal State San Bernardino and Cal State Fullerton in association with the Beyond Opera Collective, with funds awarded by the National Endowment for the Arts, California State University and the Contemporary Irish Arts Center of Los Angeles (CIACLA).

The first opera, “Why Women Went West: I Mary, Mary By Herself,” was presented on Feb. 25 with Fraser and the Grammy-nominated and winning players of Brightwork newmusic Los Angeles as part of the Cal State Fullerton New Music Festival. Exploring controversies over human rights, water wars, early 20th century feminist artist communities, “Why Women Went West” celebrates writer Mary Hunter Austin’s quest for the American Southwest. The multimedia monodrama was created by composer Pamela Madsen, with librettist/video artist Quintan Ana Wikswo for Brightwork newmusic, and Fraser, as the project initiator/director and soprano.

The second opera, “The New Frontier,” which premieres at CSUSB on March 24, is a tragic chamber opera exploring aspects and characters of the Cold War era in the U.S. Composer Jack Van Zandt, poet-librettist Jill Freeman and Fraser, again as the project initiator/director and soprano, team up with an ensemble led by Grammy-winning pianist Nadia Shpachenko to create a piece that focuses on aspects of life of women activists and pioneers against the backdrop of the atomic bomb and the daily Cold War threat of nuclear annihilation during the 1950s and 1960s.

“Jack’s music and Jill’s words are amazing,” Fraser said, noting that the opera “comes at a poignant time.”

“The piece revolves around the discovery of the splitting of the atom and the threat of nuclear war, something that is on our minds again in 2022 as we see the frightening events unfolding in Ukraine,” she explained. “Our music director, Grammy-winning pianist Nadia Shpachenko, was in fact born in Ukraine and much of her family are still there. We are of course thinking of her family and all the people suffering as a result of this terrible conflict.”

Theatrical action is conveyed through Fraser assuming a different character for “singing” each of the separate songs on the jazz-like set list, with a wide-ranging number of emotions and musical formats. The order is sequenced to tell the story and explore the feel of the period with music of many different emotional qualities. The characters include 1930s physicist Lise Meitner, a teacher instructing her class in Duck and Cover drills, the ghost of Ethel Rosenberg, a fallout shelter saleswoman appropriating the language of hipsters for her sales pitch, a fictional survivor of an atomic war describing the nuclear winter she lives in, a scientist giddy from observing the pyrotechnics of hydrogen bomb explosions, and Death happily dancing with The Bomb.

“The piece is a great challenge for me, both vocally and artistically as the music calls for the integration of an operatic technique with a jazz style,” Fraser said.

“I am having lots of fun with it, and making music with these superstars is an unbelievable opportunity,” said Fraser. “The artistic direction by Terry is genius and the design team is doing fantastic work.”

For tickets to “The New Frontier: An Atomic Age Jazz Opera,” visit the CSUSB Department of Music’s website.

Visit the CSUSB Opera Theatre website to learn more about the program.

For more information about the National Endowment for the Arts, visit the NEA website. 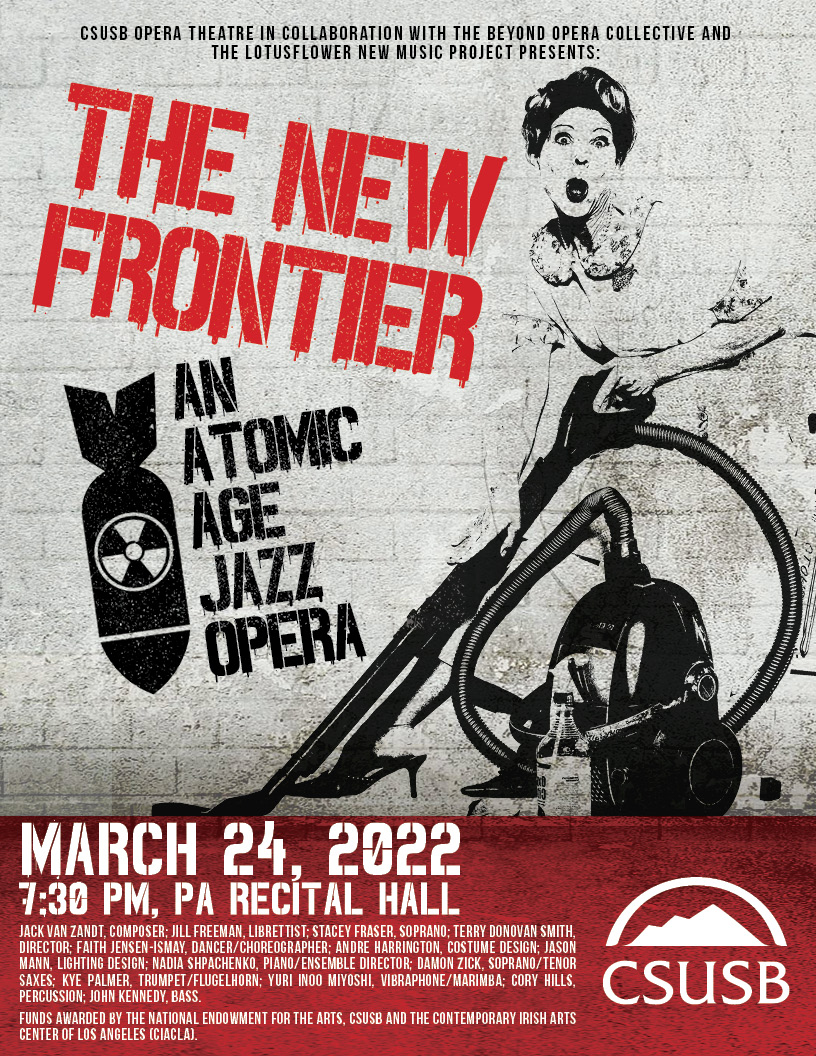