The ‘strongest woman in America,’ Sarah Robles, to share ‘Defying the Odds to Olympic Glory’ talk

The ‘strongest woman in America,’ Sarah Robles, to share ‘Defying the Odds to Olympic Glory’ talk

Along her path to Olympic glory, Sarah Robles has managed to contend with health concerns, a lack of diversity in women’s body types in sporting competitions, as well as the impact of the COVID-19 pandemic. She will share her story at CSUSB at noon, Tuesday, Nov. 9.

On her way to becoming a world-class athlete, Sarah Robles has encountered heavy-duty challenges. Each time, the former San Bernardino County resident has endured and come out on top.

She is, after all, the “strongest woman in America.”

Robles, a two-time Olympic medalist in women’s weightlifting, will visit Cal State San Bernardino on Tuesday, Nov. 9, at noon to share her experiences and present her “Defying the Odds to Olympic Glory” talk at the Center for Global Innovation, Room 209 (CGI-209). The event is being organized by the College of Natural Sciences Department of Kinesiology and the Kinesiology Student Association.

“Sarah Robles is a truly inspirational athlete, and I hope our students and CSUSB community take advantage of this opportunity to hear her story to learn from how she overcame the obstacles she faced,  and her many accomplishments,” said Sastry G. Pantula, dean of the College of Natural Sciences. “Whatever the goals may be, the power to succeed and achieve them lies within the reach of all students when they keep the focus on their goals – and Sarah is a wonderful example of this.”

Along her path to Olympic glory, Robles has managed to contend with health concerns, a lack of diversity in women’s body types in sporting competitions, as well as the impact of the COVID-19 pandemic.

Robles, who grew up in Desert Hot Springs and attended San Jacinto High School, is the first American woman to ever win multiple Olympic weightlifting medals. She won the bronze medal in Rio de Janeiro in 2016 and another bronze – more recently – at the Olympics in Tokyo this past August. Robles is also the first American to win multiple Olympic weightlifting medals in 57 years, and she is the second American woman to participate in three different Olympics. She also won gold medals at the International Weightlifting Federation’s World Weightlifting Championships in Anaheim in 2017 and the Pan American Games in Lima, Peru, in 2019.

She was described in a 2016 Los Angeles Times column covering the Olympics in Rio de Janeiro at the time as the “strongest woman in America” and presented as a realistic contrast to “the tiny gymnasts and sleek swimmers” most people are accustomed to seeing participate in Olympic competitions.

“Stop fighting your body so you can fit in with societal standards of what you should look like or perform like as a woman,” she said. “You can pursue pretty much anything you want to if you want it enough.”

Throughout her pursuit of Olympic glory, Robles has overcome hurdles.

She was first introduced to weightlifting to improve her track and field performance. She entered in a few local competitions with the idea that she would pursue weightlifting “for fun” one day.

“When I was a sophomore in college, I qualified for the Junior World [Weightlifting] Championships, and got a silver medal,” Robles said. “I gave it a try for a year, and I really liked it! I decided I wanted to pursue it more, and here I am – three Olympics later!”

She has had to content with a painful condition in her forearm that can make it difficult to compete, as well as polycystic ovary syndrome. Even when her father passed away when she was a senior in high school, she kept up her training, adding that her strategy had been “to just keep going.”

“My goals have always driven me,” Robles said. “… I could have quit many times – and for good reason – but I knew I would regret it if I didn’t check everything off my list and ended things on my terms.”

The pandemic also impacted her training.

“It was difficult to stay on track without having a clear sight of what was going on,” she said. “Thankfully, I was pretty much able to train without interruption. I came in at different training times to minimize my contact with other people, I trained more at home, and I set up a mobile squat rack on my car so I could train anywhere.”

Her message to members of the campus community is “no matter what is thrown their way, with hard work, a good support system, and some creative thinking, they can make a way for themselves in this world.”

“They can make a difference,” Robles said. “They can accomplish their goals. They can find happiness.” 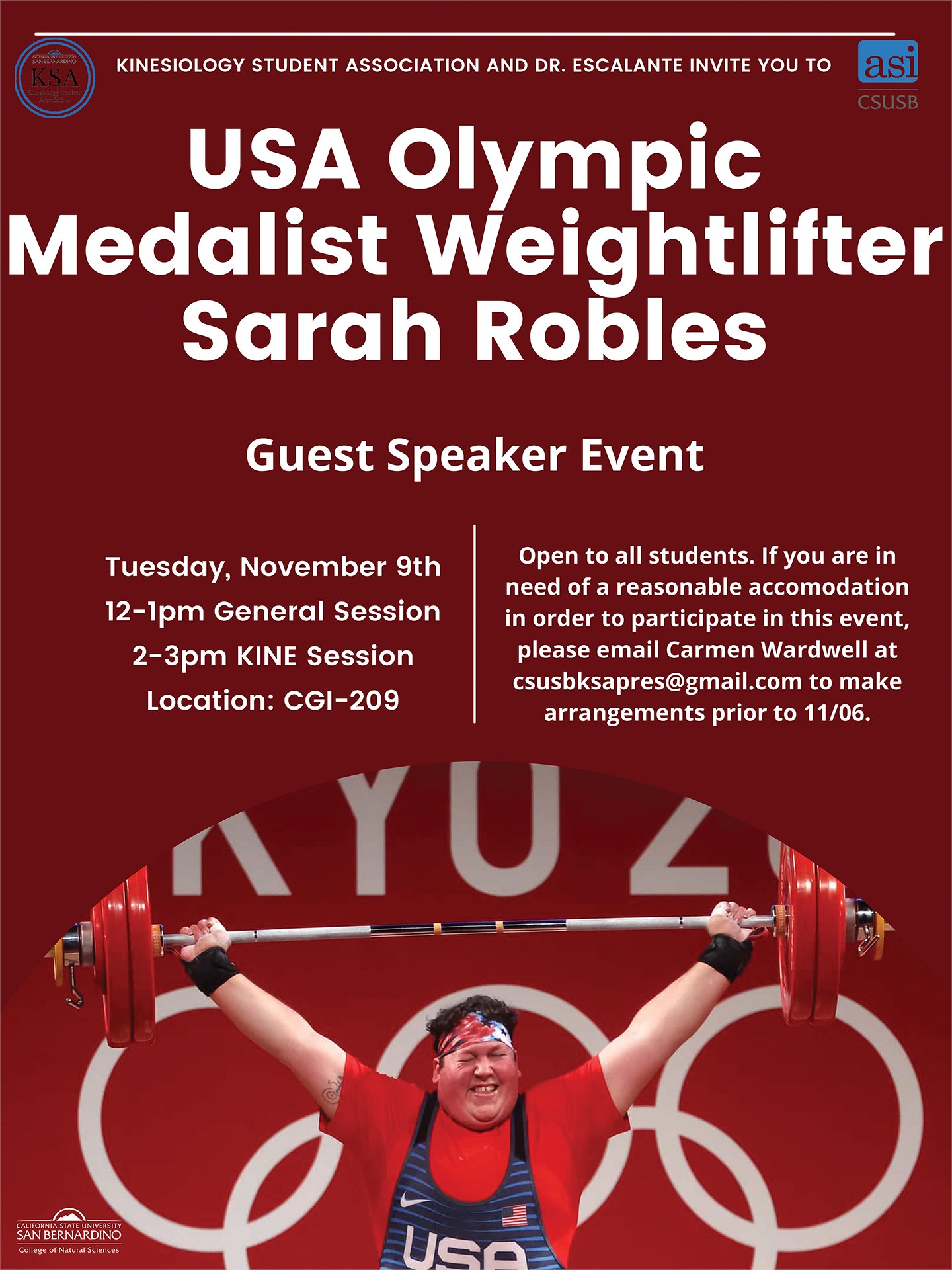