Panel will examine the consequences of neoliberal authoritarianism

Panel will examine the consequences of neoliberal authoritarianism

“Interrogating Authoritarianism in the Era of Post-Truth and Populist Leaders: Lessons from Turkey,” a free, online public event co-sponsored by an Intellectual Life Grant and Academics for Peace North America network, is set for 9 a.m. Friday, May 7, on Zoom.

The consequences of increasing neoliberal authoritarianism on civic life, human rights, politics, media and academia in Turkey during the two-decade rule of its president, Recep Tayyip Erdoğan, will be the focus of a panel discussion presented by Cal State San Bernardino’s Center for the Study of Muslim and Arab Worlds.

“Interrogating Authoritarianism in the Era of Post-Truth and Populist Leaders: Lessons from Turkey,” co-sponsored by an Intellectual Life Grant and Academics for Peace North America network, is set for 9 a.m. Friday, May 7.

“Strong leaders offer a sense of security among the populace,” said Ece Algan, CSUSB professor of communication studies and moderator of the panel discussion. “In the post-truth era, where social media makes it easier for us to find and share stories and news that reaffirm our beliefs, some leaders take advantage of this. Not only do they use a variety of media manipulation strategies, but they also develop policies to erode and undermine democratic institutions so they can gain more power.”

Americans saw that play out under the presidency of Donald Trump, Algan said, and it continues under the leadership of Jair Bolsonaro in Brazil, Viktor Orban in Hungary, Narendra Modi in India, and Erdoğan in Turkey.

“While there are stark differences among these countries and their populist leaders, there are also important similarities that can help us understand authoritarianism today,” she said. “By taking a close look at contemporary Turkey, this panel aims to do just that.”

For more information on the program, contact Ece Algan at EAlgan@csusb.edu. 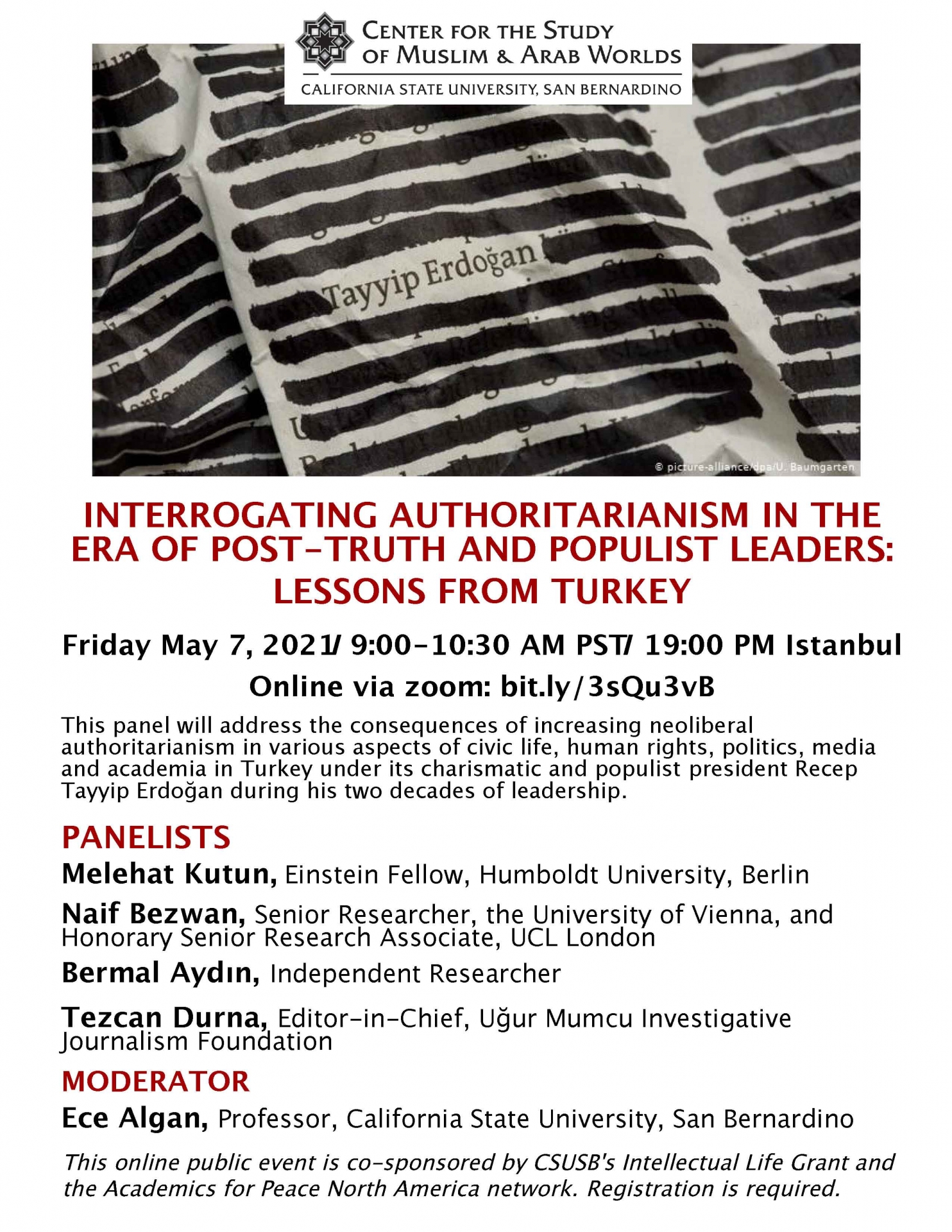 May 24, 2022 Award-winning filmmaker Sohail Dahdal to speak at CSUSB on May 27
April 26, 2022 ‘Picturing Palestinian Resistance: An Event with Artist Sliman Mansour’ set for May 3
May 24, 2021 Coyote Communicators hosted social change speaking tournament
View All News