Annie Buckley was named the recipient of the 2018-19 Outstanding Professor award, the university’s top faculty honor, during a surprise visit to one of her classes Wednesday afternoon. She also becomes CSUSB's John M. Pfau Endowed Professor.

Photos by Robert A. Whitehead/CSUSB Professor Annie Buckley’s meeting of staff and students in the Prison Arts Collective was interrupted on Wednesday, May 8, by President Tomás D. Morales and CSUSB’s senior leadership, the College of Arts & Letters and her fellow art department colleagues to surprise her with being named the 2018-19 Outstanding Professor award, the university’s top faculty honor. This faculty awards notification “ambush” is a long-time and much-loved CSUSB tradition.  In being chosen for the honor, Buckley also became the John M. Pfau Endowed Professor. 'This is a very, very special recognition, a special tradition here at Cal State San Bernardino, where we ambush or surprise faculty members who are being recognized. And we are recognizing Annie with the Outstanding Professor Award,” Morales told the class. “She’s recognized by her colleagues and by you as students for her excellence in teaching, for her scholarly activities and creative activities, service to our students, service to the people of California.”Provost Shari McMahan praised Buckley. “I think the president said it all. You are outstanding in so many areas,” McMahan said.  “As the provost, to look at the amount of grants in the College of the Arts, which typically you don’t find that at the CSU level and the university is so balanced in so many respects. It not just about the grants, it’s what you do with them and with the people of our community and how you transform lives, which touches all our hearts.” Buckley said the news “was quite shocking.” “Thank you, it’s so kind what you are sharing, but nothing of the accomplishments that you’ve shared would be done alone. They’re all part of a big group,” Buckley told the visitors. “This is a big thing and a collaborative effort. I learn as much all the people in the institution and community and on the campus, probably more than they ever learn from me. It’s an honor.”  In being chosen for the honor, Buckley becomes the John M. Pfau Endowed Professor, named for the university’s first president. In its selection announcement, the outstanding faculty award nominating committee stated, “Annie Buckley is an ambitious and engaged Professor. … She is a determined and deeply compassionate teacher, scholar, artist, and citizen, who is creating a lasting legacy of civic and community engagement through art.” The committee noted that, “Students have commented on her quality of instruction, clarity, and enthusiasm” and cited statements such as, “Annie is very enthusiastic and engaging” and that she is “very interested in students improving.” One student observed, “Professor Buckley has not only been an excellent instructor during my time at CSUSB, she has also been a profound mentor. Whether through her innovative approach to teaching or advocacy towards our local community, Professor Buckley continues to put others before herself in all her ventures … I cannot think of an educator throughout my entire college career that is more deserving of this award.” As the lead faculty member in the art department’s visual studies discipline, Buckley has stated, “When I was hired, this area was Art Education; as an assistant professor, I transformed the major in keeping with current work in the field, adding the overarching theme of art and social justice; building in High Impact Practices of Service-learning, Project-based Learning, and undergraduate research; and changing the name to Visual Studies with three emphases based on student interest and career paths.” This transformation has led to increased student interest and participation in the program. Buckley developed and currently heads the university’s Community-based Art (CBA) Program, which incorporates service learning into the educational experience. She has raised more than $2 million in grants and contracts toward sustaining and growing this initiative, including a contract from the California Arts Council and a grant from the National Endowment for the Arts. An extension of CBA is the Prison Arts Collective, which she also founded and currently directs.  Its mission is “to expand access to the transformative power of the arts through collaboration and mutual learning that supports the development of self-expression, reflection, communication, and empathy through providing multidisciplinary arts programming in correctional institutions.”  Her contributions to the field involve art making, exhibition organizing, academic writing, art criticism, writing and delivering conference speeches, professional editing, directing community engagement projects and socially engaged art practice. These activities share a common thread:  a dedication to the field of art and to social justice. Her many publications and publication-related work include serving as an art editor for the Los Angeles Review of Books and publishing in that internationally respected publication as well as in  Art Forum. She is also co-founder and editor of the online art journal Radical Actions:  From Teaching Artists to Social Practice. Her work as an artist has led to numerous exhibitions. A 2014 solo exhibition in Hollywood, Fla., was titled “The People’s Tarot,” and was mounted in collaboration with the Hollywood Art and Culture Center. It was both multidisciplinary and audience-participatory, and comprised of 22 original prints and a five-day participatory performance. It was a well-received highlight of the world’s largest leading contemporary art fair. She has also served as an exhibit curator. She has also published novels and children’s books. Buckley was awarded a bachelor’s degree from the University of California, Berkeley and an MFA from Otis College of Art and Design. For more information on Cal State San Bernardino, contact the university’s Office of Strategic Communication at (909) 537-5007 and visit inside.csusb.edu. 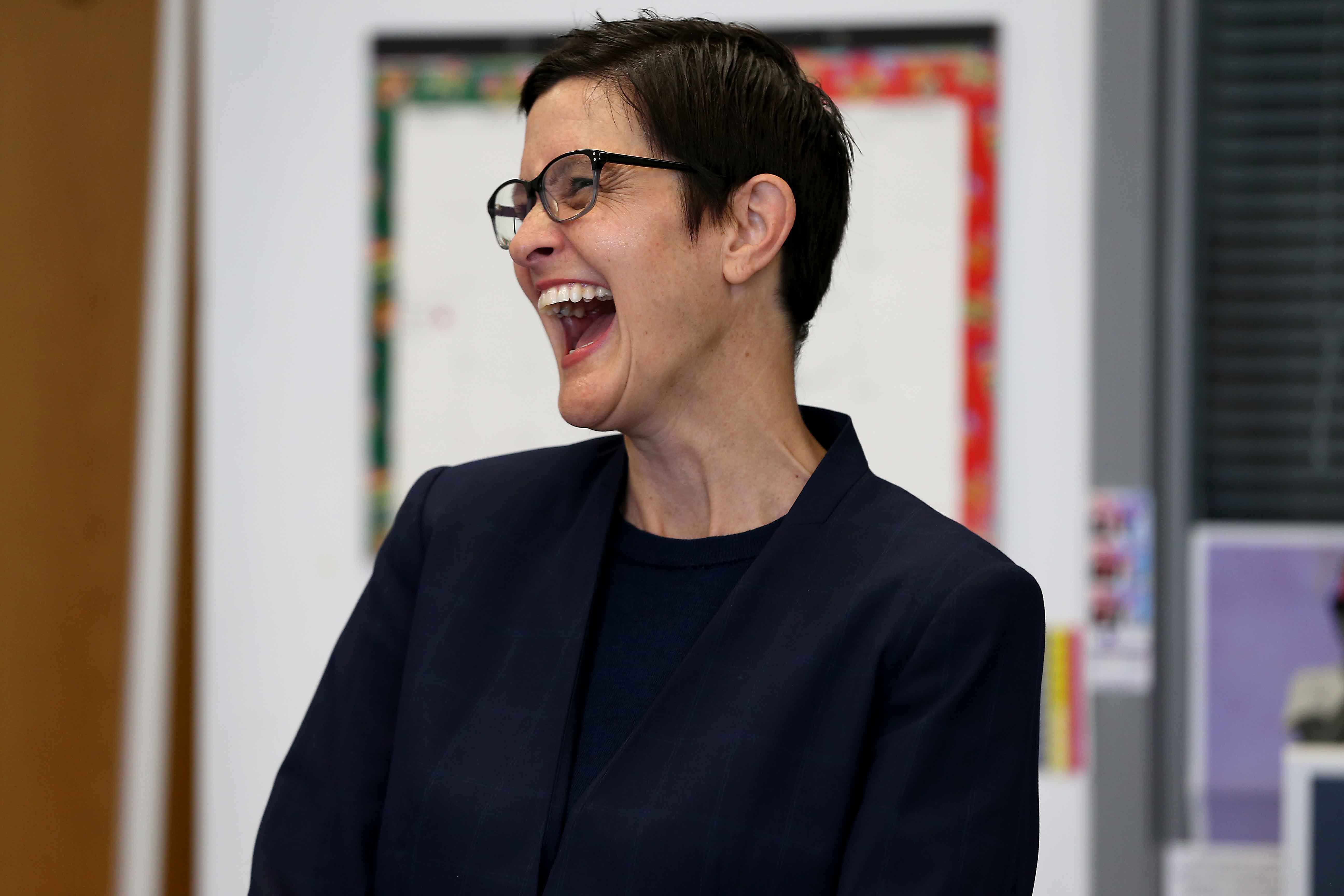 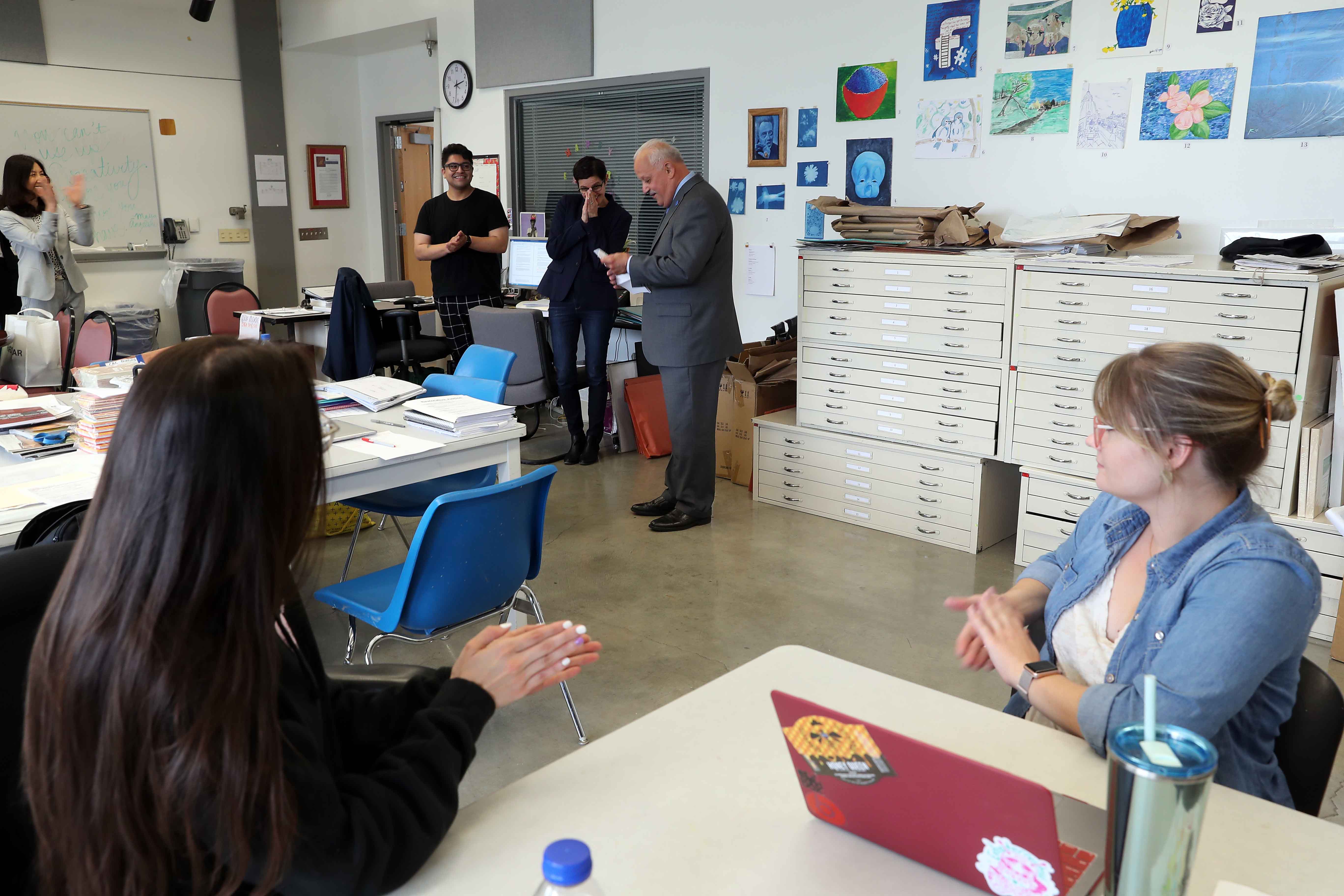