With the passing of former professor Richard M. Johnston on Dec. 12, 2017, Cal State San Bernardino lost one of its transformational campus leaders.

With the passing of former professor Richard M. Johnston on Dec. 12, 2017, Cal State San Bernardino lost one of its transformational campus leaders, both in the history of its Art Department and in the shaping of what is now the Robert and Frances Fullerton Museum of Art.

“Richard Johnston was a gifted artist, an exceptional educator and a true visionary involving art and its significance in daily life. He touched countless lives – his students, peers, and members of the community,” said CSUSB President Tomás D. Morales. “The cultural institution and resource that RAFFMA is today, serving both CSUSB and the region, is due to his vision and dedication. His achievements and influence remain an enduring part of our university’s great legacy.”

An artist in his own right, Johnston spent 25 years on the CSUSB campus shepherding the art department from its home in Chaparral Hall to its new home in the Visual Arts Center, first as chair and then as a professor. He was also hired to serve as director of the university art gallery, which he grew into the accredited RAFFMA, bringing Dr. Benson Harer’s Egyptian art collection to the Museum as well as University President Emeritus Anthony Evans’ Asian art collection.

Johnston worked closely with President Evans and Professor Emeritus Julius Kaplan, a former dean of graduate studies and an art historian, to fulfill Evans’ vision of an art museum in the Inland Empire. Hired with the knowledge that the Visual Arts Center was in the works, Johnston embraced its creation as a “window to the community.” 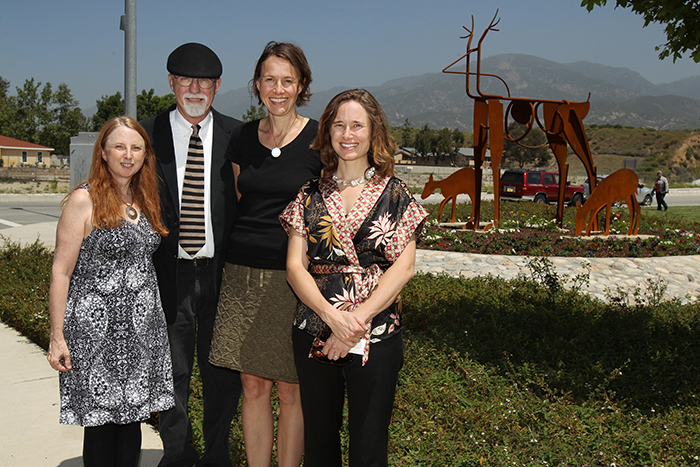 His experience as the director of the Salt Lake Art Center led to his strong belief that RAFFMA should be an art museum. That was the goal he pursued in successfully raising donor funds for this project, along with advocating for diversity in exhibitions. “I’d like to see more women, blacks and Hispanics share their talent,” he stated in an interview soon after his arrival on campus.

Johnston pursued his dedication to public art while at CSUSB, leaving behind a tremendous legacy. After stepping down as chair, he worked closely with now Professor Emerita Sant Khalsa to design and create a public art program. Acting upon a recommendation from University President Emeritus Albert Karnig, they reached out to philanthropists James and Judy Watson, resulting in the Judy Rodriguez Watson Public Art Project in 2005, which provided the funding for Art 441. To date, the public art projects created include: “Art Stop,” “Fauna Inlandia,” Four Ceramic Tile Murals, and a pending water sculpture by alumna Elizabeth Newton in the new retail area across the street from the campus’ entrance.

Judy Watson observed that, “I touch his work and feel his spirit.” Both she and her husband, Jim, shared that they, “treasured the time spent with our beloved friend Richard Johnston and are deeply saddened to hear of his passing. We spent time together at our home and in our travels to Thailand. There, as well as at home, it was our sincerest honor to know him as an incredible man who embodied unlimited kindness, treasured talents and a beautiful heart. We will miss him and will remain in our heart for always.”

Khalsa found him not only a mentor and great supporter of faculty initiatives, but also of the need to address the question of the underrepresentation of women in art. In 1994, along with the only other female tenure track faculty member in the department, Mary Goodwin, she created a show entitled “A Collective Voice,” incorporating not only their own works but also the work of the part-time female art faculty. “We [the women in the Art Department] got together on a regular basis and we just sat and talked about the common threads in our lives: working in the arts, being educators, and those common threads as women. Some of those might be children, feminism, and all the issues that we dealt with. And we all made new art that responded to that conversation that we were having with each other. We didn’t put any names on the artwork, breaking down the patriarchal hierarchy that is dominated in the art world by men. Richard was totally supportive and open to this idea.”

Associate Professor Annie Buckley, who is also the founder and director of the Cal State San Bernardino Community-based Art initiative, said she will always remember the way that Johnston welcomed her to CSUSB. “He was so kind and funny and always made me feel at ease, in even the most challenging days for a new professor. He had a way of cutting through issues and finding just the right comment or words to put everything into perspective and bring laughter and collegiality. I will miss him dearly. He was a wonderful mentor, artist, and colleague and left a powerful example for us to follow.”

It was in his role as teacher and in his approach to art that Khalsa found Johnston shone the brightest. “He was always open to new ideas and changes that were happening in both education and the art world. He embraced it. He worked very hard to stay current,” she said. “He was very, very active, not only in his own art practice and making art, but going out and looking at art. I think that he understood that art was something very fluid and constantly changing. Not all faculty see that; many get into their niche. He really embraced the idea of change. 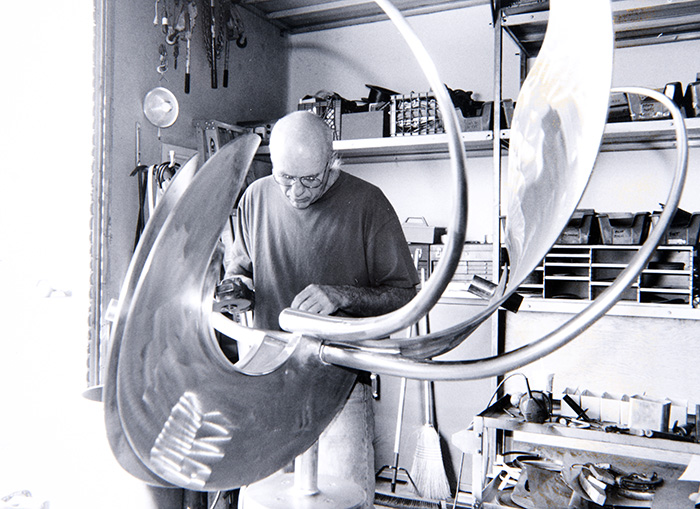 In this black and white photo from the CSUSB archive, Richard Johnston works in his Colton studio, refining a weld on the 10-foot-high flying heron sculpture, “A Friendship Takes Wing,” in 1993. The artist's first international commission was officially unveiled during the dedication of a new building and courtyard at CSUSB's sister campus, Yasuda Women's University in Japan. Cal State University San Bernardino Historical Photo

“He loved teaching,” Khalsa observed. “He really had enormous respect for his students. He felt that he could learn as much from his students as he could teach them. He didn’t see them as students, he saw them as emerging artists, fellow artists that he could share his experiences and his knowledge with. He opened his own studio to his students, which is something that not all artists would do. He would make his tools available. He had a fantastic sculpture studio. He had students who worked as his assistants, giving them hands-on assistance, which not only helped them in their own art but also with getting work in the art world. So many students out there teaching at colleges and universities, have successful art careers – they have so much respect for him.”

Born in Kankakee, Ill, in 1942, Johnston moved to California and graduated from Cal State Long Beach with a B.A. in studio art, followed by an M.F.A. from Cranbrook Academy of Art in Bloomfield Hills, Mich. He spent the next 25 years in Utah, where his projects included developing The Depot along with teaching at the University of Utah and serving as director of the Salt Lake Art Center, before being hired by CSUSB. He returned to Utah following his retirement, and is survived by his wife, children, and grandchildren as well as a legacy of hundreds of artists, teachers, and public works.