The Alhambra and the Legacy of Al-Andalus

The Alhambra and the Legacy of Al-Andalus 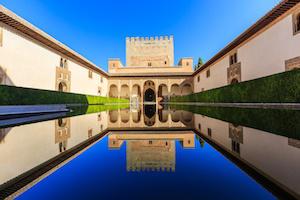 Coordinator of the Consortium for Advanced Studies Abroad in Granada, and Official Tour Guide of the Alhambra

Free and open to the Public.

For information about the webinar presentation, please, contact Inmaculada Correa Flores at icorreaflores@gmail.com.

Studying abroad in Granada implies a double journey, since while being a modern European city it also transports you to its Andalusí past, where a multicultural society coexisted.

"Nearly eight centuries of history of al-Andalus in theIberian Peninsula have shaped an inheritance that is apart of the hallmarks of Spanish, Mediterranean and European cultures" - Fundacíon El legado andalusí

The Nasrid Kingdom of Granada has been a source of inspiration for many since its days of glory up to the present. The only Taifa Kingdom that survived and coexisted with the Christians for more than 250 years was praised in the East and the West. The Alhambra was its greatest pride and its majesty is still alive today . This palatial city has brought together a host of experts, artists, celebrities and citizens throughout its long history. They have shed light on its construction and historical context, but they have also revealed its symbolic importance. Don't miss the journey!

College of Arts and Letters

Register for Zoom webinar Back to Events