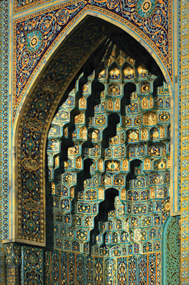 The concept for the establishment of the Center for the Study of Muslim & Arab Worlds (CSMAW) on the campus of CSUSB was initiated in 1997 and was predicated on the notion that the Center’s primary function was to serve the academic needs of the university and the wider local, national, and international communities. At that time, the largest university system in the United States, the California State University (CSU) was virtually bereft of courses in Middle East languages; its then twenty-two libraries were seriously lacking or deficient in holdings on the Middle East and Islamic world and it was a system with few majors or minors in Islamic or Middle East Studies. Our goal then, as it is now, was to develop and expand our Center as one that will serve as a flagship for international dialogue and academic excellence for our students, faculty and the local and international communities.

The first step in assuring the establishment of a broad and diverse Center was to develop formal and lasting ties with universities with whom we might advance a dialogue based on a shared commitment to international education. Our interest is to now draw on their expertise and to collaborate on a wide range of shared issues recognizing that these scholars and institutions might best represent the complex array of distinct cultures, languages, political, social, and economic expressions found in the Middle East specifically, and the 1.6 billion community of Muslims worldwide. Prior to the formal establishment of Center, numerous formal university Memoranda of Agreement (MOAs) between CSUSB and prestigious universities and institutions located throughout the Muslim world were enthusiastically supported and signed by CSUSB President Albert Karnig and Provost and Academic Vice President Louis Fernandez. This rich and ever expanding collection of agreements with Arab, Turkish, and Southeast Asian universities and institutes has since been highlighted by the exchange of students, shared multi-party university conferences, university hosting of high-level government officials, NGO and faculty delegations, co-authored book projects, scholarly journal publications, and ongoing and successful talks and tests related to the establishment of various distant learning programs through which existing pedagogical and research ties can be further enhanced.

Having set the initial yet foundational stages for meeting our Center goals, and with the strong and unwavering support of Dr. John Conley, Former Dean of College of Social and Behavioral Sciences, the Center for the Study of Muslim & Arab Worlds was established in September 2005. The Center is currently housed in the College of Social and Behavioral Sciences (CSBS).