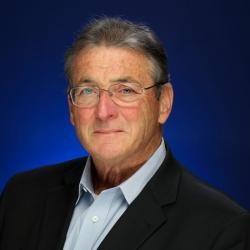 Dr. Thomas McWeeney is a political scientist, strategic planner, management consultant, and professor of government and public administration.  He currently serves as a member of the pubic administration faculty at California State University, San Bernardino (CSUSB), where he teaches a full load of undergraduate and graduate courses, including “Business and Government”, “Strategic Planning for Government”, “Intergovernmental Administration”, and “Public Management Information Systems”.   After receiving his Ph.D. in Government from Georgetown University (with distinction) in 1982, Dr. McWeeney designed, developed, and led innovative projects that have successfully transformed federal agencies and greatly expanded the reach of university programs.

Dr. McWeeney comes to CSUSB after a 30-year career in which he combined progressively high-level experience in the management of federal agencies and a continual affiliation with academia.  Between 1986 and 2014, Dr. McWeeney served as an adjunct professor of government and public administration at the University of Maryland, University College (UMUC), Central Michigan University (CMU), and George Mason University (GMU).  In these positions, he received widespread acclaim for developing and effectively teaching over 30 courses in political science, international relations, and public administration and played an instrumental role in developing new initiatives and courses that added great value and benefit to these universities and contributed to significant enrollment increases in a very short periods of time.

Dr. McWeeney served in the US government for over 30 years -- first as a senior management official and then as consultant to senior federal executives.  From 1974 to 1992, Dr. McWeeney worked in the US Department of Justice working with executive leadership to develop and implement many of the most well known programs of the era.   He held a number of senior-level positions in the US Department of Justice, including Planning Director and Budget Officer and he played a critical role was involved in the development and transformation of many high-impact programs, serving as a key actor in the development of the Freedom of Information Act, the Privacy Act, the Seized Assets Program, the State and Local Task Force Program, and the South American drug trafficking initiative.  He also led the first comprehensive strategy for the Drug Enforcement Administration and played a leadership role of the first joint DOJ/DOD interagency counter-drug strategy.

In 1992, Dr. McWeeney left the Federal government to establish the Center for Strategic Management (CSM) - a small business-consulting firm that has provided a wide array of consulting, training, and advisory services to federal executives that greatly contributed to the success of their agencies.  In 2009, he established the CSM-Public Leadership Institute (CSM-PLI), a non-profit organization that emphasizes the critical role of leadership in improving government performance.   In these positions, Dr. McWeeney has sought and received several hundred thousand dollars in Federal grants from the US Department of Justice and the US Department of Labor for leading innovative leadership projects.

Finally, in addition to carrying a full-time course load, Dr. McWeeney was named Associate Director of CSUSB’s Leonard Transportation Center (LTC) in January 2017.   In this position, he was instrumental in encouraging the US Secretary of Transportation to visit the CSUSB campus in October, 2017 – which in turn led to DOT designating CSUSB as on of 11 “transportation innovation centers” in the United States.  Current efforts are focused on developing a transportation strategic plan for the Region.

Dr. McWeeney has served as the principal consultant to key executives in several federal law enforcement agencies.  In these efforts, he has worked on behalf of agency senior executives and has led comprehensive projects that provided innovative thinking, new direction, and organizational transformation to high profile agencies facing challenges from a changing external environment and diminishing internal capacity.   Among the executives with whom he as worked closely are:

Dr. McWeeney’s close collaboration with these executives produced candid assessments of their organization’s strategic situation and their capabilities, a strong, compelling strategic direction that fundamentally changed the way they did business, a high-impact implementation plan that demonstrated the leadership commitment to the strategy, and the development of innovative pilot programs that brought new approaches, an enhanced level of performance, and long term impact to their organizations.   Significant examples include:

Related Activities Dr. McWeeney has authored and coauthored articles on performance management, health care reform, public information, and information sharing as well as numerous special studies and reports that have had a significant impact on government operations.  His work provided the foundation for the widely acclaimed book, “The Business of Government.”

Research Interests a) Regional governance as a solution to problems of intergovernmental relations and intergovernmental cohesion b) Public sector strategic management: the integration of strategic planning, performance budgeting, performance measurement and evaluation as the critical success factor for the innovation and transformation of public agencies. c) The distinction between public leadership and public management