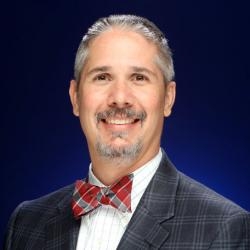 My classes tend to be group explorations, in which my students and I work together to develop understandings of how texts convey ideas and engage with larger contexts. Lectures, therefore, are short and intended to provide information to ground those explorations.

I teach courses having to do with early literatures, including:

In my other role, I am the Faculty Director of the University Honors Program. In that role, I am responsible for overseeing the program and ensuring that it best serves the students who participate in it. I assumed the Director position in 2015 and have worked to slowly grow the program while adding to its offerings.

Why do we keep returning to the past, telling modern stories in medieval settings and adapting medieval stories in new modern forms? I am fascinated by the recurrence of the medieval within modern cultural products. I edited a collection of essays and authored numerous articles on this topic and am slowly working on a book about the persistence of Beowulf in popular culture since 1930. I have produced a collection of essays, Mass Market Medieval, on the medievalism in popular culture, published by McFarland Publishing.

Additionally, I delve into medieval intersections of piety and civic discourse, examining discussions of community, particularly among the literary writers in the years around the Rising of 1381. In that work I examine Gower, Chaucer, and Langland, in addition to several of the chronicle accounts of the Rising. More generally, however, my research tends to explore the contentious ways in which medieval communities defined themselves as such with discourses of history and faith.

I am increasingly interested in developing curricula that enable medieval literature to speak (alongside modern texts) to current social issues. While History, as a discipline, dedicates energy to developing 'public history', Literary Studies (and English more broadly) has failed to develop a parallel area, becoming, instead, ever-more isolated within inaccessibly scholarly forms. This interest has driven my exploration of courses that read medieval texts to reframe modern problems and that sometimes employ service learning.

In addition to teaching and research, I have spent time facilitating education reform projects nationally. In that capacity, I have worked with faculty groups in history, social work, nursing, education, physical sciences, and psychology, and I have published guides to collaborative approaches to assessment, as well as a co-authored book on the subject, Degrees that Matter, from Stylus Publishing.