Using the Taoist idea of being like water, Russell Jeung, co-founder of Stop AAPI Hate and professor of Asian American studies at San Francisco State, says adopting the properties of the element – clarity, humbleness, persistence and restoration – is the most effective way to fight racism.

Fighting racism means to take on the properties of water – to be like water – not just for the Asian Pacific Islander Desi community, but for all who are targets of hate, a co-founder of Stop AAPI Hate said during a presentation for an audience at Cal State San Bernardino.

The idea comes from a Taoist thinking, an indigenous Chinese perspective philosophy, said Russell Jeung, one of three co-founders of Stop AAPI Hate and a professor of Asian American studies at San Francisco State. His presentation on April 18 was part of CSUSB’s Asian Pacific Islander Desi American Heritage Month celebration. 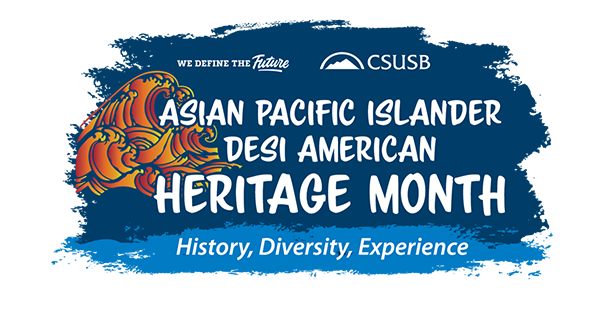 Many in the Asian American Pacific Islander community have been traumatized in the last two years since the start of the COVID-19 pandemic. Jeung said that what followed repeated history.

“Two years ago in March, we knew that racism against Asians and Pacific Islanders was going to surge, because we know our history – that whenever disease came from Asia, Asians get blamed, Asians would get attacked, and then Asians would face racist violence,” Jeung said.

Stop AAPI Hate was formed in response to the growing number of hate incidents targeting the Asian Pacific Islander Desi community, launched by AAPI Equity Alliance (AAPI Equity), Chinese for Affirmative Action (CAA), and the Asian American Studies Department of San Francisco State University. Since its inception, it has recorded tens of thousands of hate incidents – including fatal attacks against the elderly – targeting the Asian community. Along with that has come the trauma of being attacked, of being stigmatized and the general fear that one could be targeted just for being Asian – or even looking like an Asian.

Jeung said Doris Chang of New York University uses the Taoist idea of water to help people cope with the trauma of anti-Asian hate, and he said it also applies to the broader community in its effort to fight racism.

Water, he said, has the properties of being clear, humble, persistent and restorative. 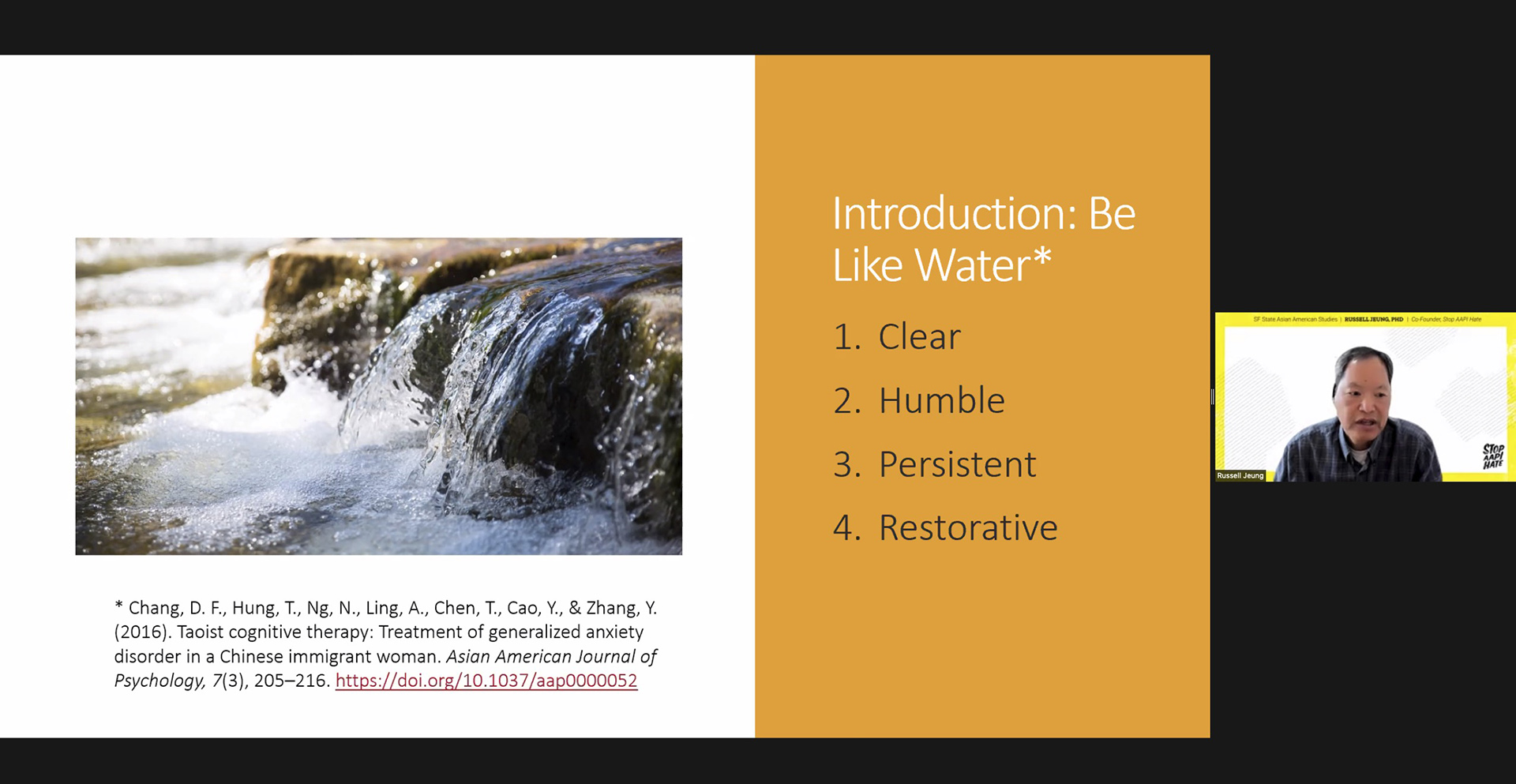 “Water helps us with clarity,” Jeung said. “Some of you probably have heard a lot about the idea of mindfulness that comes from Buddhism, from Asian traditions of just being fully present, and conscious of what’s happening. And I think what we need to do as Americans is to be clear about what’s happening in terms of our nation and understanding racism at its roots.”

To help illustrate this, he had two of his students read the experiences of elderly Asians who encountered hate incidents, and then asked the audience to comment on what they felt after hearing those accounts. Emotions shared ranged from fear, to concern, to disappointment, to anger.

“This is what the Asian American community and the Pacific Islander community is feeling at this moment,” Jeung said. “It’s a period of what I call collective racial trauma, which has all these feelings of fear, of anger, of sadness – and being pissed off. And even if you don’t experience racism directly, you could experience it vicariously. I know when I see attacks on elders, I think of my own mom or my own grandmother.”

And it’s not just physical attacks or recorded hate crimes, he said. Incidents could range from denial of service, online harassment, and microaggressions such as a racist comment or gesture. He cited a study in which in the U.S. in the past year, one out of five Asian Americans – or between 800,000 to 1 million people – reported experiencing trauma tied to racism.

Also part of that clarity is understanding that the Asian American community can be like the individuals attacking them by retaliating in kind, resorting to racism as motivation, which Jeung spoke strongly against.

So rather than fight back with force, Jeung said to be humble, like water. For example, it doesn’t take on a rock in its path with brute force, but flows around it, slowly eroding and reshaping it. In the same way, the Asian community shouldn’t fight back with violence or vilify perpetrators by “othering” them.

Instead, Jeung called for understanding the roots of racism – the systems and institutions that create and perpetuate them. For example, some politicians have weaponized the pandemic, using the term “China virus,” which played into some people’s xenophobia and which politicians used to gin up fear and votes. That went beyond name-calling, Jeung said.

“It’s what we call our implicit bias,” Jeung said. “When people thought of the virus, they thought about COVID and Chinese, and when they think about Asian people, they automatically think COVID-19.”

It’s also understanding that there is a long history in the United States – dating back to the “yellow peril” of the 1800s that Asians were coming here with disease-ridden bodies – that associates any outbreak of disease with Asians, he said. Sharing an editorial cartoon of the times, he said there was a belief that Chinese immigrants – who were brought here to do labor – were spreading disease to steal white workers’ jobs. Eventually that led to the Chinese Exclusion Act of 1882 that banned immigrants from there.

For those left in the U.S., in just a few short years after the Chinese Exclusion Act was adopted, were targeted by mobs, and whole communities were decimated, Jeung said, including one near Monterey where his own family had settled. The institutional racism was evident during a tuberculosis outbreak in the 1940s, when the Chinese and Latino communities were quarantined. It wasn’t that these communities were more likely to get the disease – it was the segregated conditions that forced people to live in densely populated and squalid conditions that promoted tuberculosis, Jeung said.

Being humble also means seeing the perspective of where the Asian community is in the racial hierarchy of America. While many in the Asian American Pacific Islander community identify with and are supportive of the Black Lives Matter movement and became more vocal in the aftermath of George Floyd’s death in May 2020 by a white police officer, many also “were thrown for an identity crisis” when one of the officers involved was identified as an Asian American, Jeung said. “We can’t see or distance ourselves from this officer because we know that people see us in him, and people see him in us. So we had to wonder, in America’s racial hierarchy, are we aligned with whites? Are we in solidarity with Blacks?”

He said, “And then we realized we are neither white nor Black, so we are just sort of invisible. I think a lot of Asians feel omitted and invisible because we’re not talked about in terms of race relations. We’re not considered real minorities, not part of America’s racial history. So, what we’re feeling is excluded or feeling in between.

“We also realized that we’re being racialized on a different dimension,” Jeung said. “Asian Americans aren’t racialized as Blacks or whites but are racialized as whether we’re insiders to America or outsiders. Whether we really belong or whether we are foreigners to be excluded.”

He said that tends to be conditional, built on the model minority myth that Asians are educated and successful. Yet, Jeung pointed out, 2020 U.S. Olympic gold medal gymnast Sunni Lee was pepper sprayed and targeted with racial slurs when she returned to Los Angeles.

“And in the times of pandemics, Asians are treated as foreigners to be excluded. We’re racialized as the ‘Yellow Peril.’ People aren’t attacking grandma because she’s smart,” Jeung said. “They’re attacking her because she’s an outsider, and America treats foreigners badly. We build walls against foreigners. We separate the families at the border, and I guess if you’re an Asian and perceived as a foreigner, it’s okay to spit and cough on us.”

Yet in that state of being humble, “I would say that Asians, although racialized differently than Blacks, can work in solidarity with Blacks and Black Lives Matter by working to dismantle these stereotypes, these binaries that keep us down. … And so, I think we really do need to address these institutions that cause racism, rather than attacking and punishing the individual.”

And like water, it takes being persistent. Just as water slowly erodes and reshapes a rock, the same approach needs to be taken to fight racism. But it takes patience and persistence.

As an example, the younger generation, he said, has stood up against racism, organizing and coming up with their own policy report in support of ethnic studies in high school. That led to legislation being passed to incorporate these courses into the curriculum. “Youth across the nation are just really persistent,” Jeung said. “You know, as middle schoolers they have been working on this for years now, and they are continuing to do so.”

Also, coming together to protest injustice or to mourn a hate crime victim fights racism by showing strength and support, he said. And it can even extend to supporting Asian businesses, creating chaperone programs for the elderly, and establishing community safety programs. Actions such as these have “been really powerful to help us address the trauma, and then fight for institutional change,” Jeung said.

“We need to be persistent. We can’t just do a hashtag with them,” he said. “But we have to be persistent in fighting for change, and we need to be restorative.” Water, he said, is restorative. He recalled visiting Manzanar, the World War II desert internment camp off Highway 395 on the way to Mammoth Lakes. Though water was scarce there, some of it was used by the imprisoned Japanese American families to create gardens.

“They were able to restore their cell blocks into a garden,” Jeung said. “And I think what we need to do is to learn from our ancestors and help restore and make beautiful a community that’s now broken apart. So, we at Stop AAPI Hate are trying to use restorative justice as an approach and work alongside other communities of color to fight for change.”

These efforts include supporting legislation for ethnic studies in schools, as well as legislation to combat the harassment on the streets of women, he said. “So this is a way where we’re trying to be preventative and trying to be comprehensive in our approach to racism and working together for others.”

But it will take clarity, humbleness, persistence and being restorative.

“Let’s be clear on what’s happening. Let’s be educated like you are – and not just be aware – but be knowledgeable about the sources of racism,” Jeung said. “If we know about the sources of the racism, then we’ll be humble. We could realize that we all have implicit biases, that we all individually may be racist. So, we need to not attack individuals (who commit racist acts) but address the institutions that cause racism by being humble. Then we could be nonviolent in our approach, we could be persistent in making change, and then restorative and bringing communities together for justice for all.”