‘Sundown towns’ focus of next Conversations on Race and Policing

‘Sundown towns’ focus of next Conversations on Race and Policing

The history of communities where people of color were essentially excluded will be the topic of the next Conversations on Race and Policing, set for 4 p.m. Wednesday, Dec. 9.

Communities where people of color were basically excluded, either by law or local sentiment, will be the topic of the next Conversations on Race and Policing program on Wednesday, Dec. 9.

“Sundown Towns: Confronting a Racially Exclusionary Practice” will take place at 4 p.m. on Zoom, and can be accessed from a PC, Mac, Linux, iOS or Android at https://csusb.zoom.us/j/97960458784.

The discussion will feature guest speaker  Tara Peterson, CEO of YWCA Glendale, who will discuss her successful efforts in working with the city of Glendale to acknowledge publicly its historical contributions to racism, and Mary Texeira, Cal State San Bernardino professor emeritus of sociology, who will provide an overview of the history of sundown towns in the United States. She is also one of the organizers of the Conversations on Race and Policing.

The typical definition of a sundown town was a community where people of color were essentially not allowed once the sun set – sometimes by law, more times by local sentiment. The term comes from the fact that some communities had signs at their boundaries that warned black people not to be in town after sunset. But the term has a more complex meaning.

According to sociologist and author James W. Loewen, “A sundown town is not just a place where something racist happened. It is an entire community (or even county) that for decades was ‘all white’ on purpose. ‘All white’ is in quotes because some towns allowed one black family to remain when they drove out the rest. Also, institutionalized persons (in prisons, hospitals, colleges, etc.), live-in servants (in white households), and black or interracial children (in white households) do not violate the taboo.

“‘On purpose’ does not require a formal ordinance,” he wrote. “If, for example, a black family tried to move in, encountered considerable hostility, and left, that would qualify the town as ‘sundown.’ Note that some sundown towns kept out Chinese Americans, Jews, Mexican Americans, Native Americans, even Mormons.”

Peterson, a recognized expert in the field of violence against women, is responsible for the executive and administrative leadership of the YWCA Glendale, which strives to eliminate racism and empower women. She has played a pivotal role in revitalizing the agency’s 93-year legacy of supporting local women and girls by expanding programs and reach, igniting a change in the culture and conversation around domestic violence in Glendale and surrounding communities. She also leads the Coalition for an Anti-Racist Glendale, which helped draft the city of Glendale’s resolution apologizing for its racially exclusionary history as a “sundown town.”

Texeira has been an instructor of sociology at CSUSB for more than 25 years. She teaches hundreds of students each year in classes on race, gender, family, class and sexuality. In 2011, she received the CSUSB Golden Apple Award for excellence in university teaching. Texeira’s interest in sundown towns comes out of her exploration of race and place in her research and teaching. 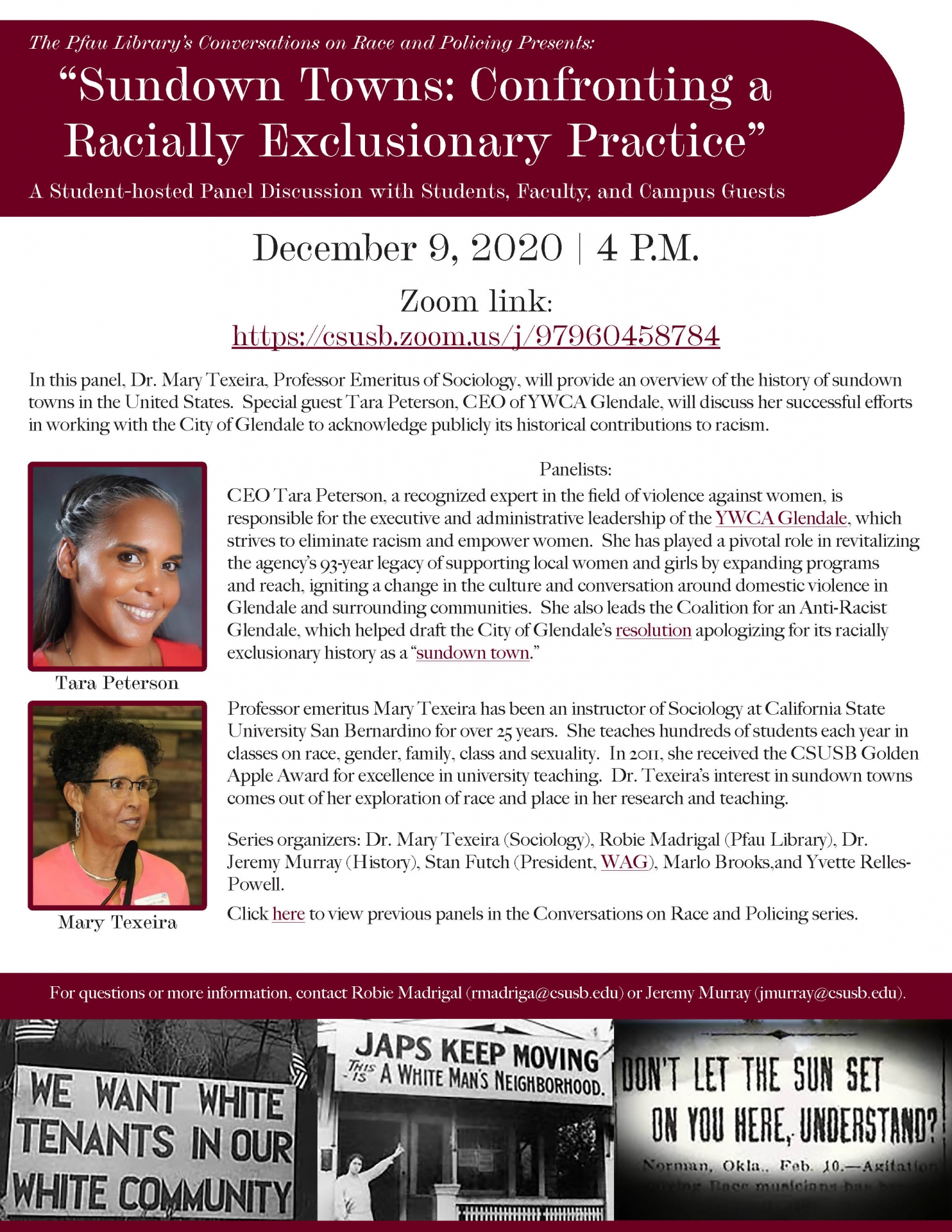