Cal State San Bernardino faculty members from a cross-section of academic disciplines will discuss current and historical relevance of the 1932 dystopian novel, “Brave New World,” when the university’s John M. Pfau Library hosts a virtual event on Wednesday, May 13.

The panel discussion, set for 4 p.m., will take place on Zoom, and can be accessed from a PC, Mac, Linux, iOS or Android.

“Brave New World,” written by Aldous Huxley, is a futuristic novel set in the year 2540 that portrays a technologically advanced society in which humans are genetically bred – from highest in the social order to lowest: the Alpha, Beta, Gamma, Deltas and Epsilons – socially indoctrinated and drugged to uphold an authoritarian ruling order.

In the Britannica website’s summary of the book: “The novel examines a futuristic society, called the World State, that revolves around science and efficiency. In this society, emotions and individuality are conditioned out of children at a young age, and there are no lasting relationships because ‘every one belongs to every one else’ (a common World State dictum).”

Huxley wrote the novel in the period between World War I and World War II, which, the Britannica website states, was “the height of an era of technological optimism in the West. Huxley picked up on such optimism and created the dystopian world of his novel so as to criticize it. Much of the anxiety that drives ‘Brave New World’ can be traced to a widespread belief in technology as a futuristic remedy for problems caused by disease and war. Unlike his fellow citizens, Huxley felt that such a reliance was naive, and he decided to challenge these ideas by imagining them taken to their extremes.”

In its biographical entry on Huxley, Britannica states that the author, who was born in 1984 in England and died in 1963 in Los Angeles, was a “novelist and critic gifted with an acute and far-ranging intelligence whose works are notable for their wit and pessimistic satire.” It said that “Brave New World” served as a model for many dystopian works of science fiction that followed.

For more information on the May 13 panel discussion, contact Robie Madrigal at rmadriga@csusb.edu. 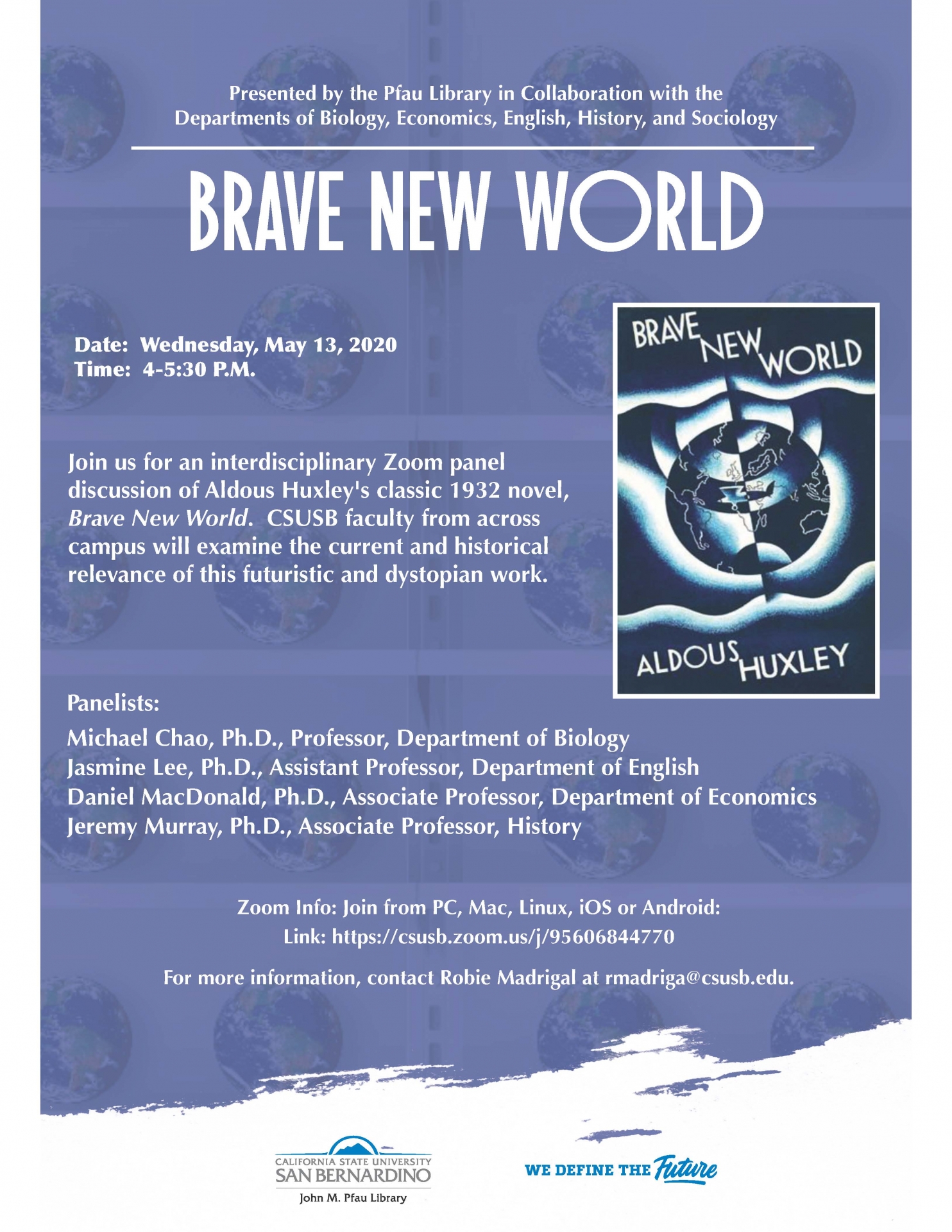