The Cultural Revolution and ‘diasporic trauma’ in Hong Kong examined

The Cultural Revolution and ‘diasporic trauma’ in Hong Kong examined

“The Cultural Revolution and ‘Diasporic Trauma’ in Hong Kong,” by Angelina Chin, associate professor of history at Pomona College, will take place at 12:30 p.m. Monday, Oct. 30, at the John M. Pfau Library, PL-5005.

The “diasporic trauma” suffered by many of the hundreds of thousands who fled mainland China as the Communist Party took control will be the topic of the first Modern China Lecture for the 2017-18 academic year.

“The Cultural Revolution and ‘Diasporic Trauma’ in Hong Kong” is the title of the Oct. 30 talk to be given by Angelina Chin, associate professor of history at Pomona College. It will take place starting at 12:30 p.m. in the university’s John M. Pfau Library, PL-5005 on the fifth floor.

The talk, which is being presented by the Modern China Lecture Series and the World Affairs Council of Inland Southern California, is open and free to the public. Parking at CSUSB is $6.

“Understanding the history of the complex relationship between Hong Kong and Beijing is an essential insight to Chinese politics today,” said Jeremy Murray, event organizer and associate professor of history at CSUSB. “From the Opium Wars of the 19th century to the Umbrella Movement of 2014, Hong Kong has been a key player and crucial territory to understand in Chinese and world politics. Dr. Chin has valuable expertise on Hong Kong’s politics and culture, and this will certainly be a lively and timely event.”

From the early 1950s till the early 1980s, many Chinese fled from the mainland to Hong Kong, then a British colony. While some of them were economic elites hoping to migrate to other countries or political aspirants hoping to join the Kuomintang (KMT or Nationalist Party) in Taiwan, others risked everything to start a new life in the colonial city.

Still, until the mid-1960s, many of these migrants hoped to return to the mainland someday. However, by the early years of the Cultural Revolution in the late 1960s, the brutality of the Chinese Communist Party and the political chaos in the mainland, such as the armed struggles in Guangdong, deeply affected the psychology of these 'transiting people' in Hong Kong.

In addition, the sensationalized reports of the terror in the printed media left a deep impression that mainland China was no longer a home to which they could return. Even though today not many people remember the details of the 1960s, this “diasporic trauma” has been a crucial factor in the formation of the so-called Hong Kong identity.

Chin, the guest speaker, has expertise in colonialism, diaspora and feminism in modern East Asia. Her research focuses on transformations of urban identity and citizenship, as well as trans-regional connections in Hong Kong, Taiwan and South China.

Her 2012 book, “Bound to Emancipate: Working Women and Urban Citizenship in Early Twentieth-Century China and Hong Kong,” explored the concept of “women’s emancipation” in South China, and the new concerns about such issues as identity, consumption, governance and mobility that the process helped to trigger.

Chin is currently working on a project on postcolonial memory and diasporic nostalgia of Chinese refugees from the 1940s to the 1970s. She earned her bachelor’s degree from UC Berkeley, and her master’s and Ph.D. from UC Santa Cruz. She was a recipient of the Andrew Mellon Postdoctoral Fellowship in 2006-2008, and the Chiang Ching-kuo Foundation Scholar Grant in 2015-16.

The Modern China Lecture Series was initiated to promote awareness of important issues related to China for those on the CSUSB campus and in the community. In the series of more than 35 lectures, workshops, film screenings, and roundtable forums since January 2014, China scholars from UC San Diego, UC Riverside, the Claremont Colleges, UCLA, USC, UC Irvine and other institutions have visited the CSUSB campus to share their expertise and opinions.

For more information on the Oct. 30 event or the Modern China Lecture Series, contact Jeremy Murray, associate professor of history, at jmurray@csusb.edu.

For more information on Cal State San Bernardino, contact the university’s Office of Strategic Communication at (909) 537-5007 and visit news.csusb.edu. 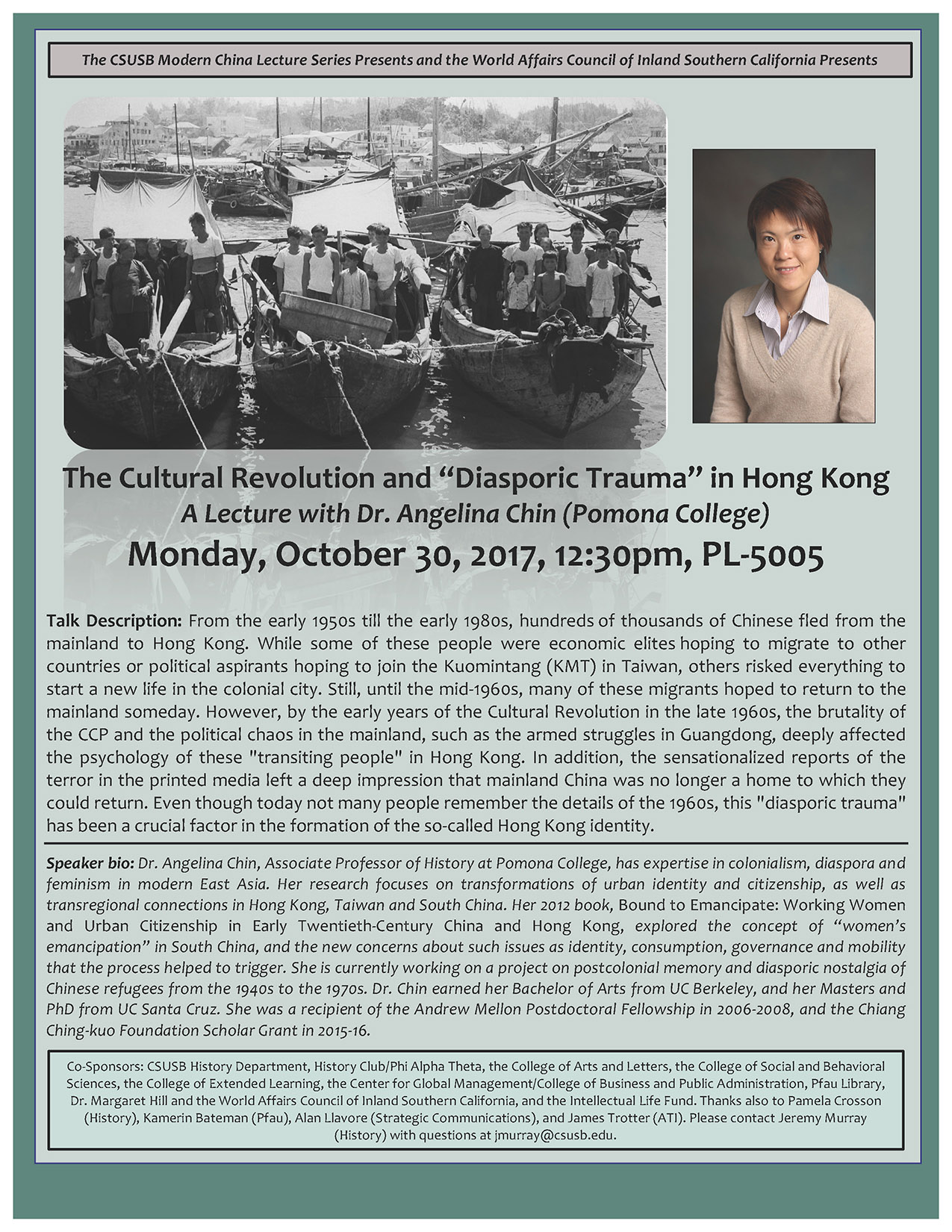