CSUSB professor makes the leap from the ocean to ‘outer space’

CSUSB professor makes the leap from the ocean to ‘outer space’

Rick Addante, assistant professor of psychology, was part of a NASA crew that simulated a space mission called HERA XIV to an asteroid this past summer, helping the agency research the effects of long-duration space flights.

On the list of memorable summers, this one certainly ranks at the top.

Rick Addante, an assistant professor of psychology, was in the Caribbean island of Grenada for a Cal State San Bernardino grant from Professors Across Borders, doing decompression diving on a shipwreck, collaborating with colleagues at Saint George University Medical School on a research study hoping to establish a study abroad course for CSUSB students, and working to protect endangered Leatherback turtles.

Then came notification that his application to NASA for what are called analog programs — earthbound simulations of space missions the space agency hopes to conduct in the future — had been accepted.

And he had 10 days to get to Houston, home of NASA’s Johnson Space Center, to begin training as a mission specialist and bond with three more crewmates for a simulation that would begin on Aug. 5 and last for 45 days.

“It was sort of an exciting business-as-usual addition of one more step in the summer’s adventures,” recalled Addante, the only California State University faculty member selected for this mission, dubbed HERA XIV. 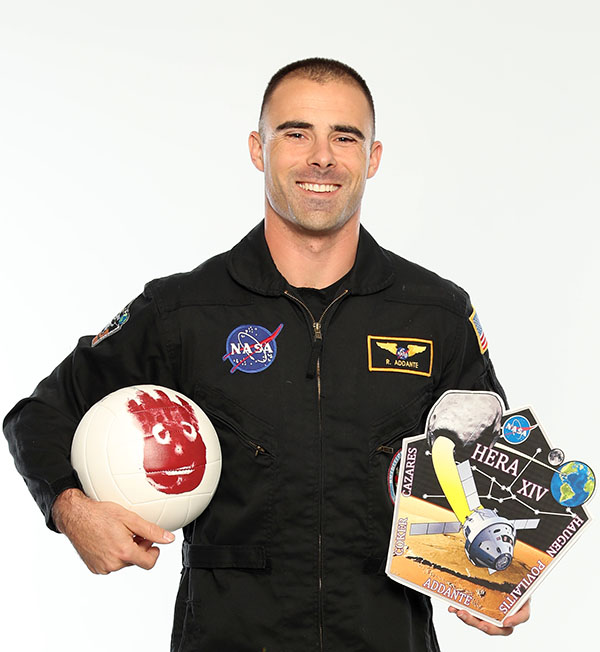 Yet Mother Nature had a different plan and threw a wrench into that 45-day mission, which made the summer no less exciting. But more on that later.

The aim of the mission for the four-person HERA XIV crew was to journey to an asteroid, collect samples and return to Earth. NASA, in addition to running the crew through its mission-related tasks, wanted to learn how people might respond to long-duration flights in the tight quarters of a spacecraft. The ground crew for HERA, which stands for Human Exploration Research Analog, and program researchers collected crew data on the physiological and psychological effects of extended isolation and confinement, team dynamics, and conflict resolution.

Earlier in 2017, Addante had received an email that NASA was accepting applications, “and being an active research psychologist and neuroscientist, I couldn’t pass up applying for a chance to contribute to our scientific understanding of the how the mind and brain may interact in the long-duration space flights that will lead our next steps throughout the universe,” he said.

And, once he was selected, came the training: “an intensive crash course in astronautics and science,” Addante said. “It was like a combination of space camp for adults, being a kid in a candy store, and a scientist’s dream. We got to learn to operate robotic arms, spaceship flight simulators, lunar landing simulators, and space walks in virtual reality.”

While typical missions would have a crew train together for months, the HERA XIV crew had to squeeze all that into a much smaller window of time. Still, Addante said, they found ways to bond and become the unit they needed to be to carry out the mission.

“We worked together really well to develop team cohesion early in training through a combination of training together, laughing together, and team-building experiences.

“For example, one weekend, I brought the crew to a team-building program on an historic tall-masted sailing ship in Galveston from 1877, The Elissa, where I had volunteered on a few years prior while living in Texas, and which the astronauts had done earlier, and we got to see how others have historically lived and worked together in confined environments,” Addante said. “Our commander, who worked for NASA locally, also hosted a barbecue at his Houston home, where we got to know each other better over good food and camaraderie. We also took a team trip to dine at Boondoggles, a well-known astronaut hangout by Johnson Space Center that helped us get into character a bit more.”

With an “ingress” ceremony to mark the start of the mission, the crew was sealed inside its simulated spacecraft on Aug. 5. Addante said NASA did everything it could to make it seem as if they were departing Earth, from including large-screen monitors showing their home planet receding in the distance and the passing stars, and delays in radio communications as their craft moved further away.

“It was pretty easy to feel like we were away from Earth, because we didn’t have much other interaction or contact except for mission control,” Addante said. “No cell phones, email, or internet. And since we had very busy schedules of tasks from morning through midnight, there wasn’t much time to think of anything else than the mission at hand.”

As a mission specialist, Addante’s job included operating the spacecraft’s Canada Arm robotic simulator, flying the lunar lander flight simulators, spacewalks and exploration on the asteroid. And NASA made sure that the simulation was as real as it could be. For example, after donning the virtual reality headset for the spacewalks and the asteroid explorations, or EVA in NASA-speak, for a few hours, Addante felt similar fatigue as when back from a real flight flying Cessna planes back home. 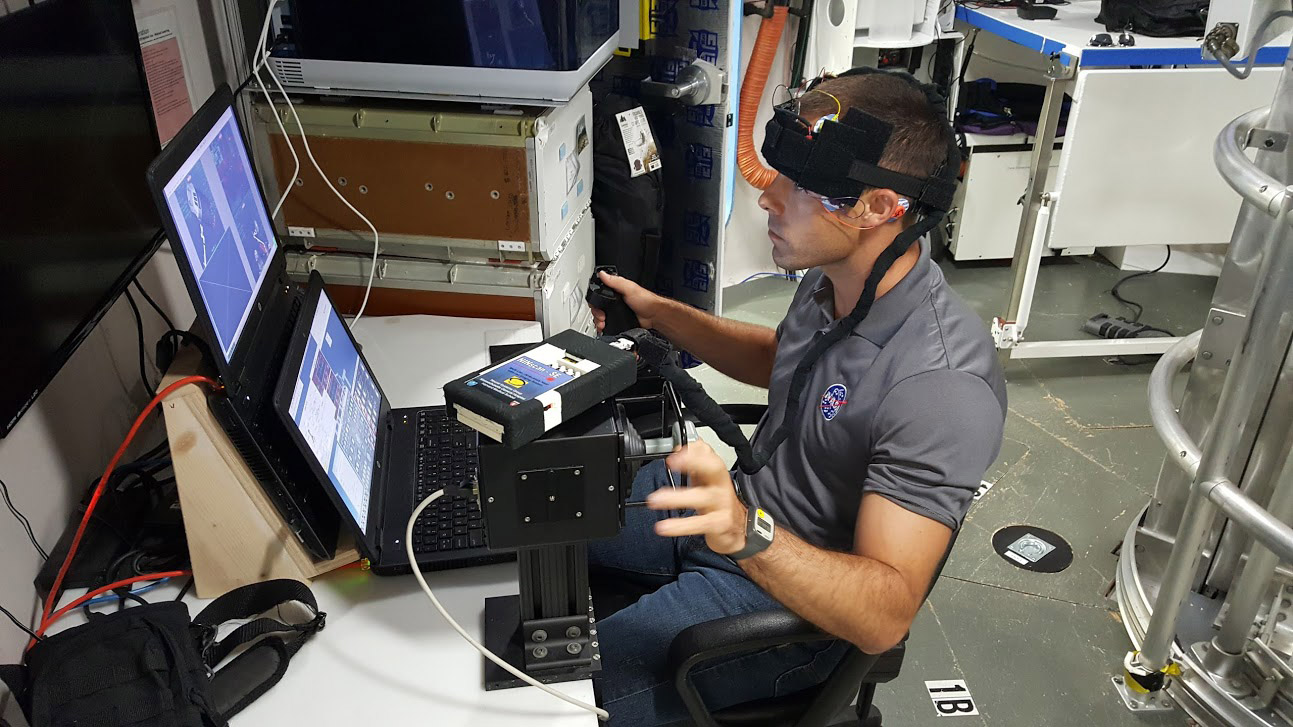 Rick Addante works one HERA XIV similuators. As one of the mission specialists, his job included operating the spacecraft's Canadian Arm robotic simulator, as well as going on simulated spacewalks and exploration of an asteroid. Photo courtesy of Rick Addante.

He was also responsible for conducting science experiments, including growing plants in the HERA spacecraft together with elementary school classrooms back on Earth, building robots, 3D printing, growing brine shrimp for experiments, cleaning, filling out a lot of psychological surveys, “and watching a bit of Netflix.”

Because of the confinement and relative isolation, Addante said the difficult part of the mission was being away from family and friends, and not being able to enjoy being outdoors. “I brought pictures for my bunk of my fiancé and greyhound dog, Juno, read Neil Armstrong’s biography, and listened to mp3s of the Jocko Podcast, to stay focused on the team’s mission,” he said. “After the mission ended, it was great to see the sun again and be reunited with Erica and Juno.”

Most memorable, he said, were the fun times with his crewmates — they were able to bring on board their own “Wilson,” named after the Wilson volleyball from the Tom Hanks movie, “Cast Away.” The mission peaked for Addante “when I took the first (simulated) steps landing on the asteroid using virtual reality, saying, with a nod to Newton, ‘If we have flown farther, it has only been by having traveled on the wings of Giants.’”

Not too long after, however, Mother Nature on Earth intervened by way of Hurricane Harvey. The storm made landfall on the Texas Gulf Coast on Aug. 25, and pounded the area for days after, dumping 42 inches of rain at the Johnson Space Center from Aug. 25-28. Addante and the crew could hear the wind as it pounded on the building that housed the simulator, but HERA XIV’s Mission Control crew updated them on the situation, and kept them focused on the tasks at hand.

While they were never at risk, NASA officials decided to end the mission on Aug. 27 because of the danger to support personnel who had to travel to and from the space center, as well as look after their families and property. The only personnel at the Johnson Space Center from then through Sept. 5 was the support crew for the International Space Station and a few other essential workers.

“We had complete confidence in NASA and Mission Control, and they made incredible sacrifices keeping us safe while their houses and vehicles were under water,” Addante said. “We were disappointed at the early completion, but happy that we didn’t put them at any further risk amid the tornadoes, hurricane and flooding.”

Despite the early end, it would be incorrect to call the mission a failure. It did accomplish what it set out to do, providing needed data for researchers, helping them to define the future as they plan long-duration space flights.

“In the 1950s and ’60s, the unknown systems for spaceflight were rocketry and engineering, and they got test pilots to bravely do the research that led to success,” Addante said. “In the modern era, especially for the next giant steps into our universe via long-duration space flight onto distant planets, the unknown systems are now the human mind, brain, body, and its social interaction with others.  For a brief period of time, I got the incredible opportunity to be a test pilot for this and help a much larger team of professionals. This psychology is the new frontier, and the future is exciting.

“Essential analog simulations, our HERA teams will help to give scientists and researchers the data they need to succeed as the engineers generations past did,” he said. “It was an honor to join their efforts and do my small part to contribute to their giant leaps across our universe.”

And there are aspects of the mission that Addante was able to apply to his classroom teaching and the laboratory.

“I try to emphasize the important lessons of teamwork and team cohesion both in the classroom and in the lab,” he said. “The classroom and labs may seem, and at times indeed be, individual efforts by students, but ultimate success still depends on teamwork among study groups, lab groups, and with instructors.

“Having a good attitude, being a selfless teammate, and maintaining a positive mindset are core elements of working successfully on such big projects, and we can develop those skills with practice through working on our own projects in the classroom and lab,” he said.

“In the lab, I was inspired to integrate new technologies I learned at NASA, such as functional near infrared spectroscopy,” Addante said. “I’ll be taking classes at MIT to better learn this method for recording brain activity, so that I can offer the same training opportunities for CSUSB students to do such work here.”

Should the stars beckon him through NASA, Addante said he would love to go. If not, he wouldn’t mind participating in another analog mission; NASA has one called NEEMO — for NASA Extreme Environment Mission Operations — that houses a crew in an underwater habitat.

“I would love an opportunity to complete another mission, this time in the NEEMO Analog in the Florida Keys,” he said. “Since our prior mission ended ‘under water’, it would have a certain poetic-ness to it, as the NASA Mission Control team rode out the Harvey storm saying, ‘Ad astra per aqua,’ meaning ‘to the stars through water,’ and it would be a good fit with both my research and operational background in tech diving that initially led me to HERA.”