Women’s Leadership Conference: Much progress made, yet more needs to be done

Women’s Leadership Conference: Much progress made, yet more needs to be done

Attendees at the conference were encouraged to stay involved in advancing issues important to them, even if it seems they face opposition, and to remember they define the future.

Since the inaugural Women’s Leadership Conference in February 2018, much progress has been made in women ascending the major leadership roles and positions. “So much has happened since the last conference,” said Tomás D. Morales, president of Cal State San Bernardino, when he formally welcomed participants to the second annual Women’s Leadership Conference at the university on Feb. 8. “Women have had a significant impact on all segments of society, both throughout the United States and around the world.” Look no further than the results of the November 2018 midterm elections in which voters sent a total of 127 women to Congress – 102 to the House of Representatives, marking the first time in history that more than 100 women served in the lower chamber, 23.4 percent of the total roll of its 535 members. In the U.S. Senate, the 25 women make up 25 percent of the membership. And, said Melissa Abad, a sociologist at the Stanford VMware Women’s Leadership Innovation Lab who gave the morning keynote presentation, more women are attaining their college degrees at a high rate. 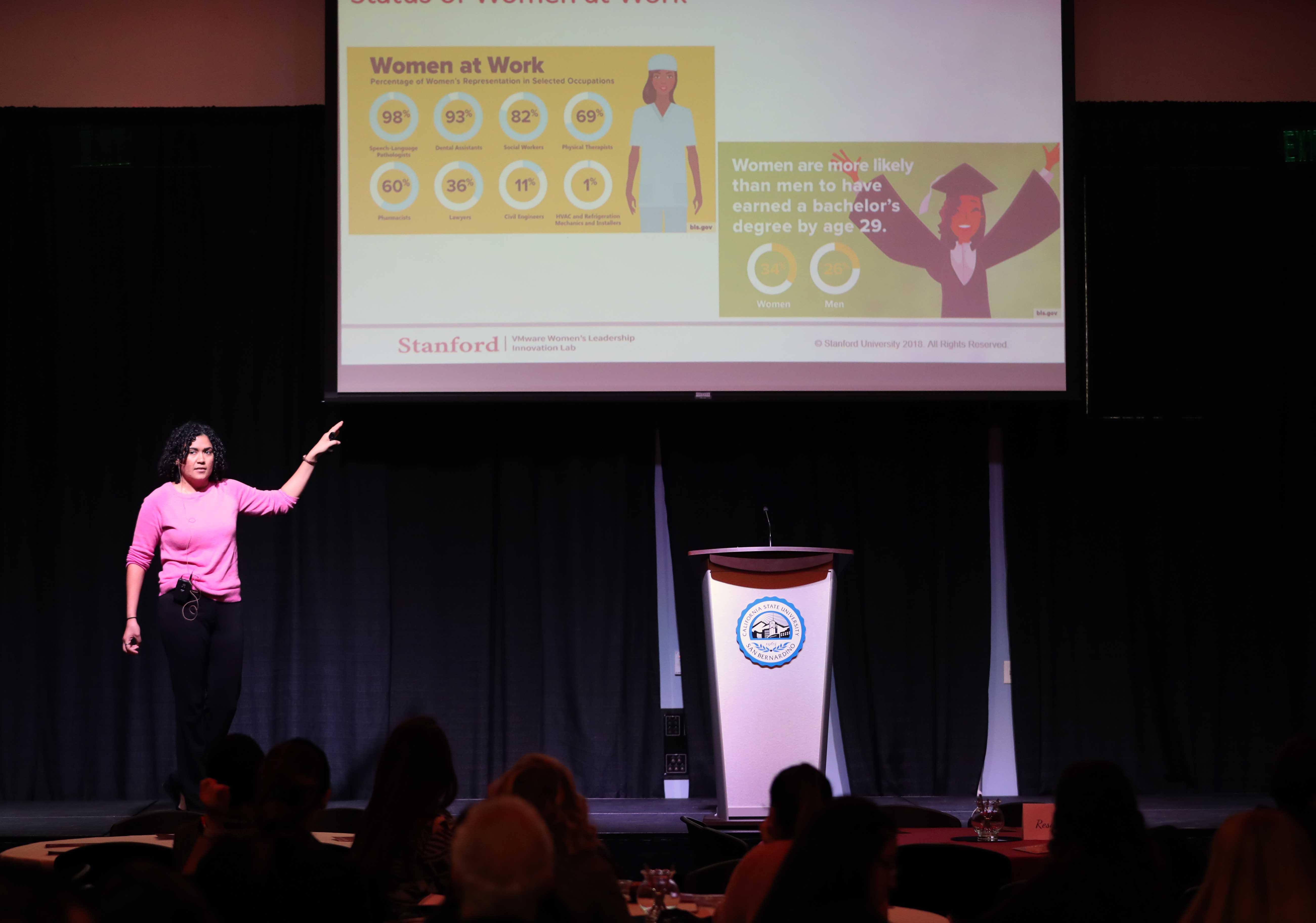 Melissa Abad, a sociologist at the Stanford VMware Women’s Leadership Innovation Lab gave the morning keynote presentation.Yet she and others who spoke at the daylong conference acknowledge that much work still needs to be done, not only in increasing numbers of women in leadership positions across the board, but also in correcting misperceptions and erasing stereotypes of what women are capable of. Battling bias, stereotypes and long-held beliefs about women’s roles in society, for example, it’s not unusual for a woman lawyer to be mistaken for a court clerk, Abad said. While such jobs are dignified and respectable, “what does it mean if you’re busting your butt and getting as many credentials as possible and people still can’t take you seriously?” she said. “Until we start teaching people that things can come in different packages, they’re going to take the easy shortcut.” Abad offered some solutions to breakdown those perceptions and barriers, including encouraging women to ask for help and to build allies outside the areas in which they are comfortable. She also said they should not be shy about educating people about themselves or their backgrounds – they may not be the package people might be expecting. “This is a long process,” Abad said. “When we talk about change, when we talk about organizations and bringing change … we have to give ourselves permission to be messy and to make mistakes.” Conference attendees later were given an inside view of part of the process ushering in change when the co-presidents of the National Women’s March, Bob Bland and Tamika D. Mallory, shared their experiences in the afternoon keynote session. 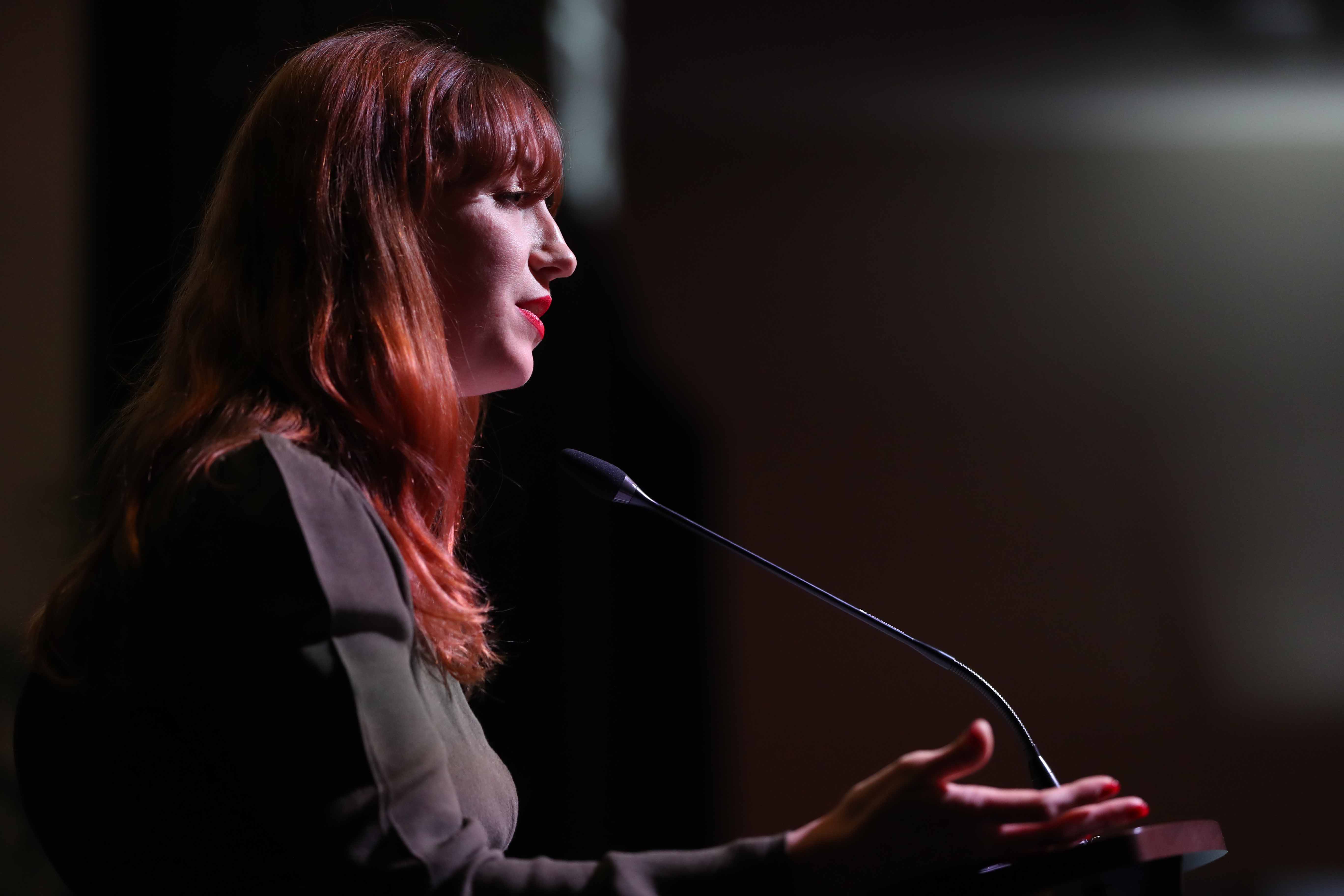 Bob Bland, co-president of the National Women's March.The conference theme, Activate to Motivate, Bland said, “very much describes the process that took place when we were organizing with 70 national organizers, thousands of state and global activists, and 5 million women, friends and allies in what would become the largest single-day protest in U.S. history.”That was the first National Women’s March on Jan. 21, 2017, held the day after President Trump’s inauguration. Many, Bland said, were “devastated” that Hillary Clinton, Trump’s Democratic opponent, fell short of winning and becoming the nation’s first woman president. But also disheartening was the tone and tenor of the campaign.Bland said, “The rhetoric of the 2016 election cycle insulted, demonized and threatened so many: immigrants of all statuses; Muslims, Jews, Sikhs, and those of all religious minorities; queer, and trans folks; black, brown and indigenous people; the disabled; survivors of sexual assault … basically anyone who wasn’t a cis-straight, able-bodied, educated, financially privileged, white non-immigrant man.”She said the movement was forged by women of many backgrounds, experiences and ideologies – many shared, many not – and that diversity and number was to be its strength “in numbers too big to ignore.”So the message sent to the new administration, and the world, on Jan. 21, 2017, Bland said, was “as Hillary Clinton famously said, ‘Women’s rights are human rights.’ We stood together that day, and every day for the past two years, recognizing that defending the most marginalized among us is defending us all.” 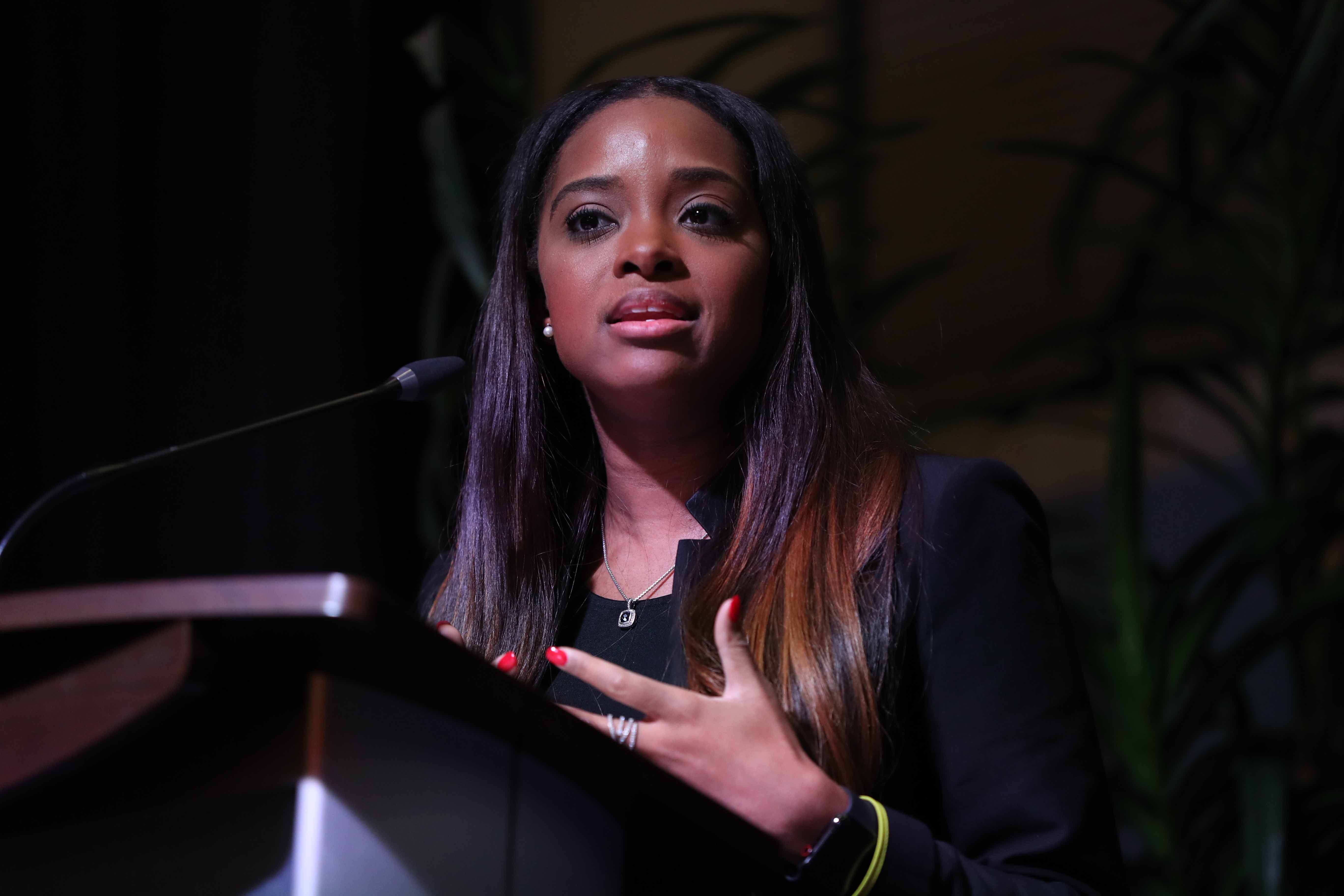 Tamika D. Mallory, co-president of the National Women's March.Still, the work was not easy, and building and maintaining alliances within the movement has been challenging, said Mallory. The aim, then, has been to create relationships built on mutual respect despite differences in opinion, she said.“What we are trying to do with the Women’s March, and through much of the organizing that is happening across this country, is shape a new reality,” she said, “to create a new narrative that says women of all backgrounds, off all types, are at the center of this, and that, in fact, in order for us to be true to who we say we are, women who are most marginalized must be out front.”Getting to that point has been a struggle. For example, Mallory discussed how some in the movement couldn’t see that gun reform or fighting racism was as much a woman’s issue as reproductive rights or equal pay.Despite the challenges and conflicts that may make one leave the movement, Mallory said that’s when it was most important to stay involved.“I think the reason why we are here today is to say to all of you who are sitting here, that you are the ones responsible for right-siding this thing,” she said. “That it will only stay true to some core values if you stay in it.”In some cases, they may be the only person to enlighten others, Mallory said. “If you get up from the table, with all of the education you have, with the patience that you develop from being in this environment, and all that you have been afforded, if you get up from the table and walk away, our movement will never be what it should be.”And Bland, taking note of the university’s “We Define The Future” messages throughout the campus, said, “You’ve got a great school motto, because you do define the future. You as individuals, you collectively, you define the future. And don’t let anyone ever tell you otherwise or get you confused about that. You’ve got to keep that truth inside yourselves.”
More: