The presentation by retired Seattle Police Chief Norman Harvey Stamper, “Breaking Rank: A Top Cop’s Exposé of the Dark Side of American Policing,” will be livestreamed on Zoom beginning at 3 p.m. Wednesday, March 10.

A retired police chief will offer his inside view of law enforcement from his perspective and discuss how substantive reform of law enforcement can take place when the next Conversations on Race and Policing takes place at 3 p.m. Wednesday, March 10.

Norman Harvey Stamper – who spent most of his 34-year career with the San Diego Police Department and the final six (1994-2000) as chief of the Seattle Police Department – will present “Breaking Rank: A Top Cop’s Exposé of the Dark Side of American Policing.”

Stamper holds a Ph.D. in leadership and human behavior, and has published numerous articles and books on police reform. His books include “Breaking Rank: A Top Cop’s Exposé of the Dark Side of American Policing” (2005) and “To Protect and Serve: How to Fix America’s Police” (2016.)

He is also known for the Seattle Police Department’s response to protests in 1999 during the World Trade Organization Ministerial Conference. His decision to use tear gas against protestors to clear an intersection eventually led to his resignation. In a June 2020 interview with PBS, Stamper said, “It was the worst decision, I think, of my career. Certainly, when it comes to tactics in protest situations, the absolute worst decision. I’m ashamed of the decision that I made.”

In a 2018 article, titled “Honoring Police Includes Acknowledging Systemic Reform Is Needed,” he wrote, “… a proper tribute (to law enforcement) starts by accepting what is for some a painful truth: Much of the criticism of American policing — rudeness, bigotry, and discrimination; unlawful stop and frisk; false arrests; sexual predation; corruption; excessive force — is valid.” 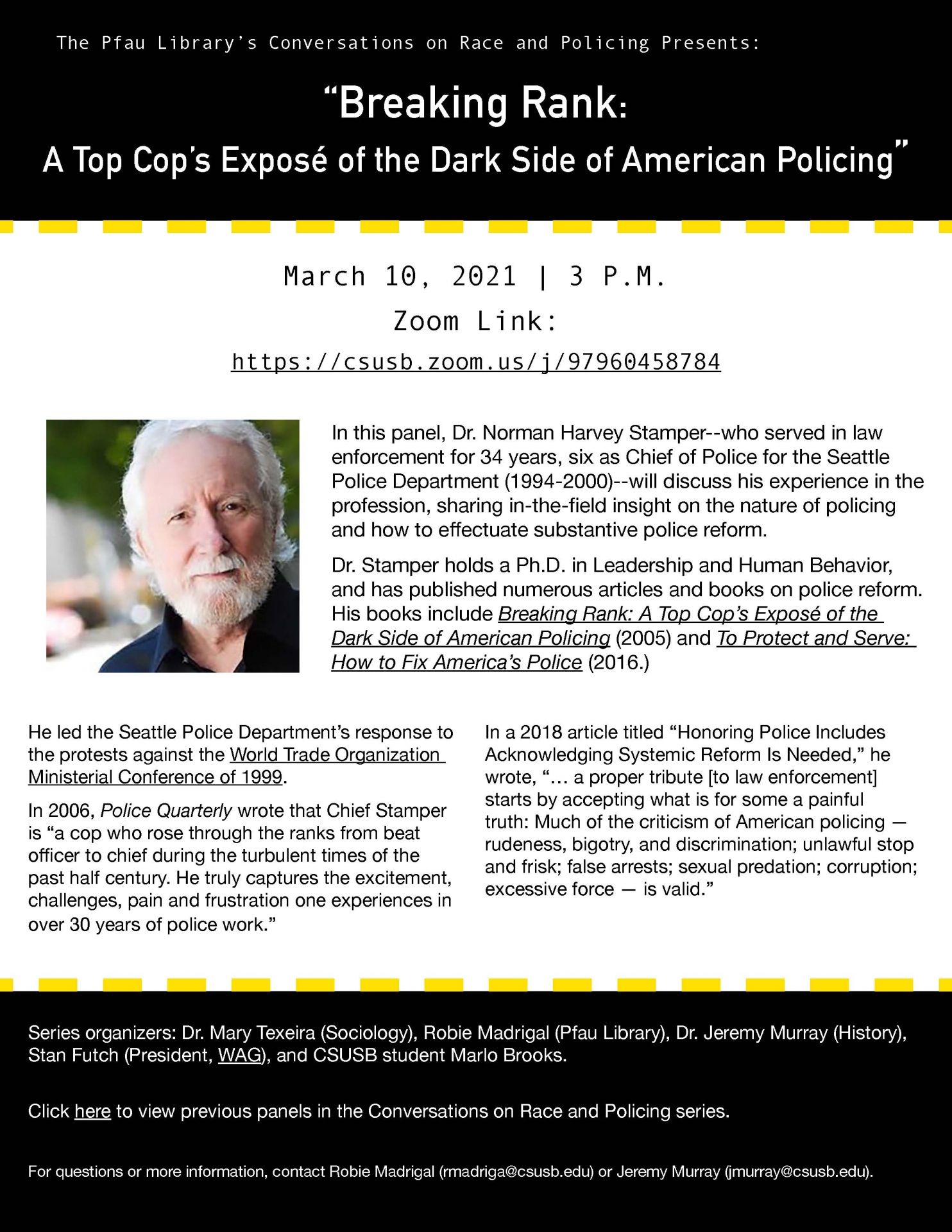 May 14, 2021 South Carolina sheriff to detail how she is working to regain the community’s trust with her department
May 11, 2021 Documentary, ‘Pride Denied,’ focus of next Conversations on Race and Policing on May 12
May 3, 2021 Consequences and context of police drug raids on public health and structural racism topic of program
View All News